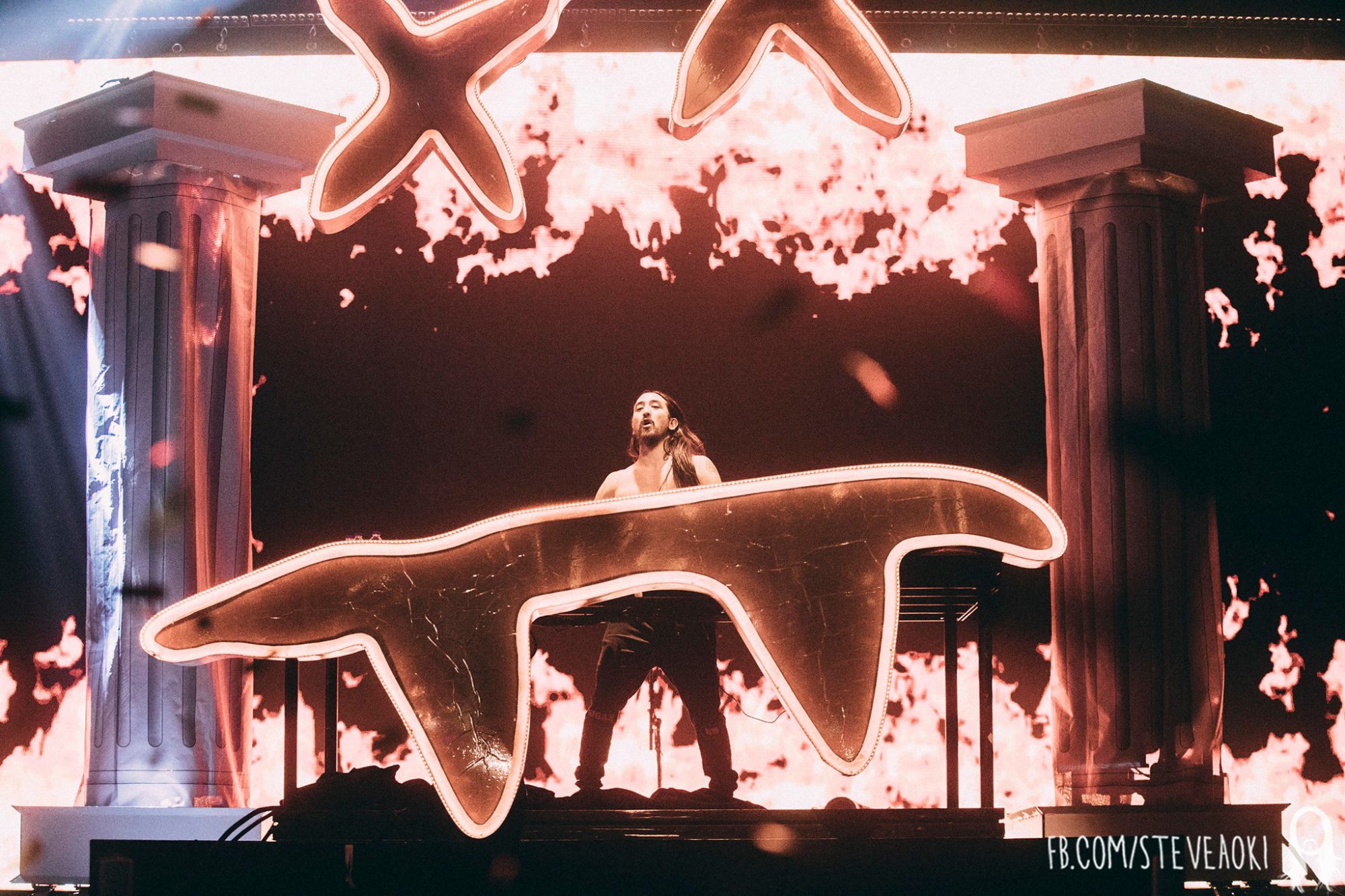 It was a full night of fun partying and dancing on the final stop of Steve Aoki’s KOLONY tour in Seattle.

When I first heard that Steve Aoki was coming to Showbox Sodo in Seattle for his KOLONY tour, I immediately told my friend, who is also a big fan, that we had to go. After weeks of waiting, the night had finally come and we arrived around 8:00PM after a brief stop to the box office and a quick security check. We immediately ran over to the merchandise booth since it was the last date of the tour and picked up a stylish shirt before making our way to the crowd.

When we arrived, Ricky Remedy was opening and warming up the crowd; this was my second time seeing him about a year after his stop in the Midwest and it was every bit as great as the last time. Not long after, Grandtheft started his set with his collaboration with Keys N Krates “Keep It 100” and proceeded to slay the crowd with great party songs with a remix of Papa Roach’s “Last Resort”, Eminem’s “Lose Yourself” and DMX’s “Party Up (Up In Here)”.

There was also a throwback to Zombie Nation’s track “Kernkraft 400” and The Killers’ “Mr. Brightside”. Grandtheft was even scratching the turntables at one point; it was a fun set to just dance to overall.

The venue incorporated the string lights that ran across the ceiling into the light show before Steve Aoki came on. This helped with the atmosphere to build up hype for the night before the full lighting effects that the tour had brought were put into use later. We made a quick stop to the restrooms, which badly needed an attendant to keep the place tidy, then picked up drinks before heading back to the floor. 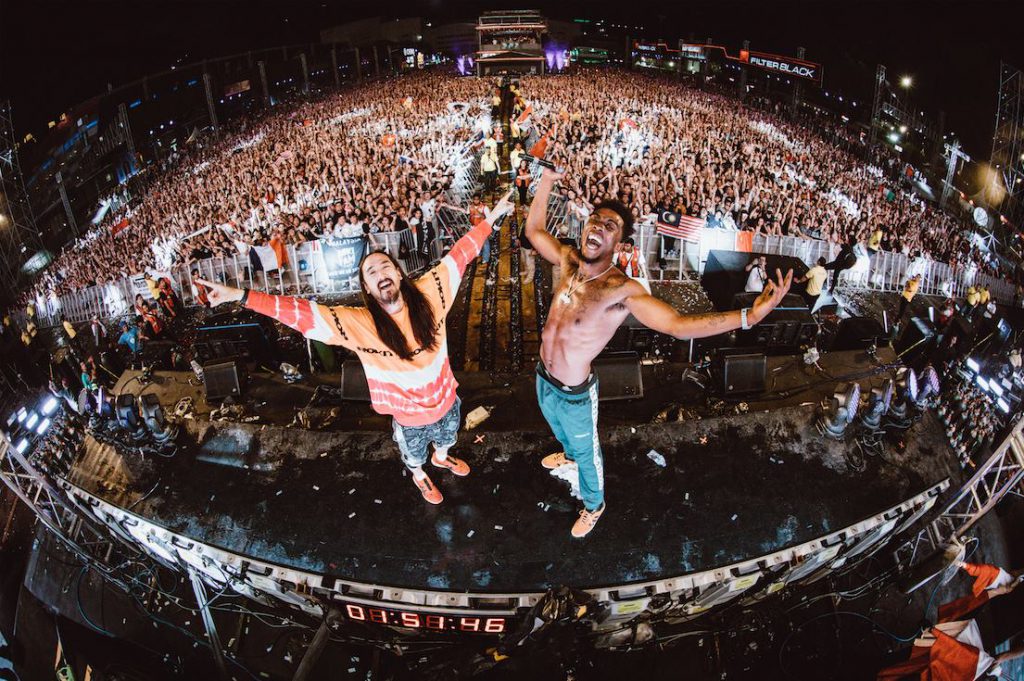 One of my biggest concerns of the night was the incorporation of hip-hop artists on the lineup.

I ended up not actually minding the sparing use of the live performances by Bok Nero and Desiigner throughout the night during DJ sets. The beats during their songs were enough to make me dance even if I didn’t care for the vocals at some points. By the end of the show, I felt that I could enjoy going to a hip-hop show in the future or would be down to see good hip-hop artists incorporated into future festivals.

This definitely wasn’t a rave, but my friend and I were able to find great vibes in the beer garden area. Before Desiigner’s set, my friend and I had noticed two people next to us who were dancing and giving off good vibes. During a break between sets, I approached them to compliment them on their dancing and for keeping the crowd in the 21+ section alive. We ended up dancing with the two of them for the rest of the night and even picked up food after the show nearby. I always seem to find better vibes in the back of the crowd.

I think there was maybe one other person also wearing a Spirithood in the entire venue, but there were a few people donning kandi. With the return of hip-hop in the mainstream, it’s interesting to see how cross-generational the crowd was and it further attested to Steve Aoki’s ability to maintain his throne in the scene.

When Steve Aoki came to the DJ decks, the stage had revealed its epic design and the energy of the crowd turned up even more.

Steve Aoki’s set featured both newer songs from KOLONY and mashups of Seattle-based artists for the first hour. He proceeded to play a set dedicated to the Seattle scene and was even wearing a Nirvana shirt that he eventually threw to a fan in the crowd during a mashup of “Smells Like Teen Spirit”. The energy in the room was also palpable when Macklemore & Ryan Lewis’ “Can’t Hold Us” was mashed up with “No Beef” that had the whole crowd singing along.

The controversially named “Plur Genocide” track that Steve Aoki collaborated on with Carnage was also featured and I’m still conflicted on how to feel about the song. It’s a great production and the stage even lit up as a rainbow while it played, but as a raver I think the naming of the track is in poor taste. But my spirit was lifted again with an Owl City “Fireflies” remix, Aoki’s remix of Oliver Helden’s “What The Funk”, and “Boneless” mashed up with ACDC’s “Thunderstruck”.

Before we transitioned into the second hour of the KOLONY tour set, the most memorable part of the night was during the Steve Aoki Chester Forever Remix of “One More Light” by Linkin Park as it brought the room to a standstill. The dedication video that played on the LED wall behind the decks definitely brought a tear to my eye, something I wouldn’t have expected to happen on this tour.

The final hour was full of classic tracks, champagne, and cake bringing the night to a close.

Halfway through the set, Desiigner came back on stage to perform his collaboration with Steve Aoki from the KOLONY album. It seemed to kill the vibe of the crowd due to the more mellow nature of the song, so we decided this was the perfect time to re-hydrate. It’s a good thing we did because it was time to turn the clocks back and relive some of Aoki’s greatest hits.

One of my favorite remixes that Steve Aoki has done is his remix of Celine Dion’s “My Heart Will Go On”. Of course, when it came on I was ecstatic because it’s synced to a clip from Titanic with his face superimposed on both Jack and Rose while they have their arms out on the ship. If you have not caught an Aoki set before, this segment is worth it alone.

It’s not a Steve Aoki show without cake and as the night rolled on I was increasingly anticipating the chaos that comes with his famous cake throwing. Once “Cakeface” started playing, the crowd screamed loudly, “Cake me, cake me, cake me!” Even though we were way in the back, it was still a sight to see. It’s quite satisfying to see people get smashed with entire sheet cakes.

Cake wasn’t the only fun interactive segment on the KOLONY tour; he also invited fans who brought “Mayhem”-related track signs in the audience to dance while the track played.

It was quite hilarious to see a sign that said “Mayhem” on one side and “Hi Mom!” on the other. While the Dim Mak founder has been criticized for allegedly not mixing live, it was very evident he was, in fact, mixing live. I was able to hear the outro of songs start when he was away from the decks signaling the end of a song. He quickly hurried back to the stage at one point when the song had totally stopped playing, though we barely noticed because of the amount of fun we were having.

After singing along to his remix of Kid Cudi’s “Pursuit of Happiness”, Steve Aoki asked everyone to turn their phone lights on and for the house lights to turn off. Aoki jumped on the DJ decks and waved his light left and right while “This Is What We Started” played in the background closing the set perfectly.

Steve Aoki remained off the mic for the majority of the night with the exception of the end of his set. It was a shocking surprise that he brought the production crew and the artists on stage to give them props and thanked them for making the KOLONY tour possible. We left the venue in bliss and knew that no matter how tired we were the next morning, it was worth going to see Steve Aoki on a Wednesday night.