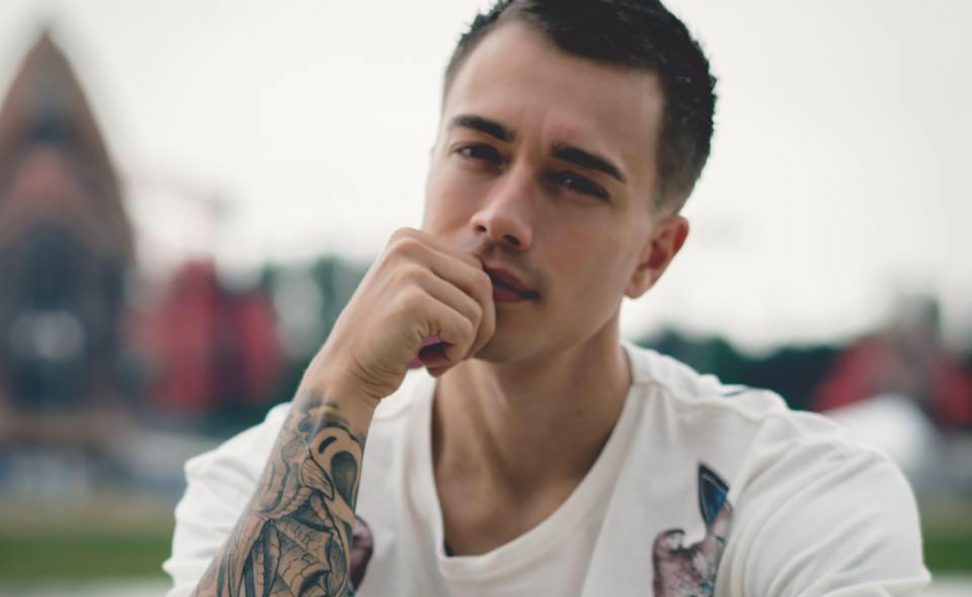 Headhunterz is back in the Hardstyle scene with a new album and it was worth the wait!

The monumental news of Headhunterz’ return to Hardstyle announced at Defqon. 1 last year brought with itself a gigantic hype-train of people getting riled up about new music. The hard dance community began to work on determining what would be in store from one of the most beloved members of the scene, and the anticipation for the release of The Return of Headhunterz reached an all-time high.

Today, hard dance fans and devout followers of Headhunterz now have some new music to tune in to as the album is now available around worldwide. Known as a perfectionist when it comes to sound, Headhunterz has left fans impressed over the years with his quality releases, and this album is no exception. Quite possibly one of the best sounding albums of the year so far, it also will be a strong contender of being crowned one of the best albums in the history of the scene.

There are currently two versions of the album: Hardstyle.com offer the extended mixes of the tracks excluding the interludes for DJs, while iTunes and Spotify offer the full album listening experience. A physical copy will be available in the future.

Tune in to the album below and join me as I break down why the four-month wait for the album was worth it!

The album begins with the intro dropping us sweet lyrical nothings with a voice like butter and a few callbacks to the vocals of “Tonight”.

The intro leads us into the first track, “Rescue Me” with Sound Rush ft. Eurielle with the phrase “All we’ve got is this precious moment. Take my hand, we can rescue each other.”

The track features a nice blend of Sound Rush kicks and typical Headhunterz vibes, especially the little buzzing lead at the beginning. Eurielle’s vocals are as lovely as ever, being laid over some violins in the break. The main melody is okay; it’s not bad by any stretch of the imagination, but both have made better. It doesn’t make me go ‘whoa’ or drag me into itself with its atmosphere.

It’s kinda sad that I could tune out this melody in my head at any given moment were it not for Headhunterz leads that always catches my attention. The fact that the melody gets only the slightest of shift in pitch in the second climax comes off as frankly lazy from someone of his caliber and it doesn’t make the track any better.

“Rescue Me” is not a bad track, but it’s just there. It doesn’t excite me or makes me wanna move and the worst thing about this is that I know that both artists can do better than this.

“The Truth” interlude uses a light orchestral version of the “Takin’ It Back” melody while telling a story about Headhunterz’ journey back to hardstyle.

“Takin’ It Back” is Heady’s rapping vocals doing a comeback with the typical whimsical voice filter on it and the music video is a gigantic trip down memory lane complete with feels. I’m not gonna lie: I’m not the biggest Heady fan out there, but this track managed to make even me a bit emotional.

The melody is outstanding, the kick is perfectly supporting it, and the whole package is just damn good. The second climax of the track is basically copy-pasted from the first one, but with a melody this good, I can’t blame Willem.

“No One Can Stop Us Now” is the fourth Wildstylez and Noisecontrollers collaboration and it’s a perfect follow up to “Tonight” and dare I say it even surpasses it. The mid-intro is a down-pitched version of the melody playing in their previous track’s break, especially apparent this track’s break as well where it is being played on the chimes while Tonight-guy is speaking. Then the main melody hits and it’s amazing.

I just wish they used the shorter and more apt name “Levitate” that the community came up with instead of this tongue twister. The track’s name being this awful jumble is literally the only negative I can bring up.

Q-dance’s number one track of last year, “Destiny”, also gets remastered with a cinematic feel. Everyone knows how good it is, everyone knows how amazing it was at the Defqon. 1 End Show and everyone, including your mother, loves it.

Soon after, the intro of the track “Still Standin’” begins with police dispatch chatter, city sounds and a cigarette being lit.

Suddenly, Heady starts rapping in his more mature voice and the pounding of the mid-intro starts to fade in ever so slowly. Even muffled the power of the kick is obvious. This is gonna hurt.

When the kick actually drops it is this fantastic old school Heady feeling kick with crunchiness and crispiness. In comes the break with the full verse of Headhunterz’ rap complete with the melody of “Gangster’s Paradise”. This part was the whole reason the album got delayed, so they could fix the licensing issues.

The climax itself is the crunchy kick with the melody playing over it in an almost purist way. Truly an ode to the older tracks of Heady. I really like it despite the very obvious sample.

Speaking of samples, “Path Of The Hunter” features an amazing melody and samples the Hatsune Miku track “Sakura Sakura”, which itself is based on an old Japanese folk song.

The kick featured on “Path Of The Hunter” is just earth shattering. The slow drums and the horns lead us into the aria-like singing of our favorite turquoise haired vocaloid and the buildup begins with the percussion kicking in.

Then the kick drops and we have our minds literally blown out of our skulls. It’s not hard in the sense of being harsh on the ears and overly distorted and raw, but it’s plenty heavy enough to make your entire being reverberate from it. It’s a heavy, techy kick that makes you cry tears of joy, or maybe even tears of pain.

What makes this track so great is the fact that Headhunterz finally mixes up the structure of his track. Usually we’d see a track have 2 climaxes, both of which around a good 20 seconds or so long, but this time Heady extends the first climax with a kick and synth-switch to almost a full minute without exhausting the track’s energy.

And the best thing? There is MORE. Afterwards there is yet another break into the final climax of the track to close it off properly. I absolutely love this track and it crept itself into my top 5 of this year with ease.

“Eye of the Storm” continues the story and prepares us for the final track, “Our Church” featuring Sub Zero Project.

The long-awaited “Our Church” is here and it’s glorious. The mid-intro is out of this world, even crazier than “Path Of The Hunter”. Featuring an even stubbier techy kick with some ping-pong influences in the latter half, plus those goddamn phat Heady screeches at the end, the mid-intro is probably already the best mid-intro of 2018.

The break is fantastic, complete with the organ play and a choir chanting about unity in the scene. “This Is Our Church” is being spoken and the melody starts playing. It drags you with itself by sheer brute force and when the bell tolls, you know your fate is sealed. The status of the weather suddenly shifts to Genesis 17:7, a rain of SZP kicks with Heady leads drops on your head. Nothing is safe and everything is swept away. We had to wait four months for The Return of Headhunterz. Was it worth it? The sound design and artwork on this album alone is enough to recommend it.

The breathtaking and mindbogglingly detailed cover for this album was made by Headhunterz’ own dad himself. The man was also responsible for most of the Hard with Style artworks and especially the HwS: Origins artwork, back in 2014.

The cover is insanely detailed, I can’t stress this enough. Complete with a cryptic code covering the edges, possibly containing teasers and names of potential newcomers to the new label, or track names. The cover features a relief with a brushed steel or possibly granite texture depicting Headhunterz in a stylized armor standing on top of a mound made of swords and boulders, arms open in an almost ascendant-like pose.

The smaller bits may be representative of a track. Starting on the bottom left we clearly see Headhunterz and Sub Zero Project dressed up in robes with hands pressed together for prayer, representing the track “Our Church”. On the bottom right, we can see the twin brothers Sound Rush, who are representing Rescue Me, and on the top left we see 4 figures, Joram, Bas, possibly Corey, and another unidentified one riding a three-headed hydra, representing the track “No One Can Stop Us Now”. On the top right, we see a figure with a bow drawn, possibly representing Path of the Hunter.

There are three more notable figures, one is a person running with a torch in hand an one in a strange getup with a pen and a dagger in each hand. No idea what those represent, or the wall of soldiers to the right of Headhunterz. All in all, this is quite possibly one of the best artworks in the scene both in detail and in beauty.

The title on the top is interesting too as the name of the artist is omitted in favor of it being a part of the title itself, but truth be told I think I would’ve preferred the album simply to be called The Return or something like that.

As for sound design, Headhunterz’ puts out everything crisp and clean. The mixing is loud and punctuated. Heady’s perfectionism and new studio definitely paid off!

The Return of Headhunterz is biblical with it being a completely perfect real-life example of the parable of the prodigal son.

And by that, I mean word for word. Headhunterz had it all: he was at the top of the scene and was set for life even if he didn’t do anything. But instead, he chose to go out into the big world, ‘waste’ his talents and burn out from it.

Upon return, he offers his servitude and instead is being dressed in royal clothing and treated as the best thing that ever happened to the scene. At first, this pissed me off; I was salty that he could just go out and do whatever and waltz back into our lives and take all the spotlight from those whom I felt were more deserving than him. But then Headhunterz makes more high-quality music and I’m back to being a fan.

Like I mean seriously, the kicks in his tracks were always good historically, but then upon his return, he just styles over the scene with new sounds. The only ones on a comparable level to him at the moment are geniuses like Noisecontrollers, Code Black, Michel Pollen, Audiofreq, D-Sturb, Warface and Radical Redemption.

I was pissed that he came back, but now I’m glad because this gives the scene the shakeup it needed. No one can afford to go for second place anymore. Competition drives innovation as the saying goes.

Defqon.1 is Mecca for the Harder Styles