Win a Pair of Tickets to Catch Coming Soon!!! at Avalon Hollywood

Israel is known as one of the hottest countries to produce psytrance musicians, and one such pair of artists will be at Avalon Hollywood to usher in the long weekend. Together, Dui Biton and Irad Brant make up the duo Coming Soon!!!. Having joined forces in 2012, Biton and Brant have been doling out their infectious progressive psytrance beats for over five years.

It’s said that the origin of the name comes from the duo’s goal to consistently produce innovative and next-level sounds. In the time they have been in the scene, Coming Soon!!! has garnered support from multiple massive psytrance artists such as Neelix, John 00 Fleming, Captain Hook, and many more.

Though they are mostly in the psytrance world, depending on the event, the duo is known to throw out bits of trap and rap sounds into their set, so you never know what you may get when they’re on the decks. In addition to throwing down amazing sets, the duo also head up their own progressive psytrance imprint called Kicks On The Block.

Coming Soon!!! has a long list of festivals they played; most notably, they rocked the stage at the 2016 iteration of Dreamstate SoCal and most recently played at Transmission Prague. Head down to Avalon to hear hard psytrance sounds paired with a bit of trap and a whole lot of fun!

Love psytrance and want to attend? Enter to Coming Soon!!! at Avalon Hollywood!

Win a Pair of Tickets to Coming Soon!!! at Avalon Hollywood 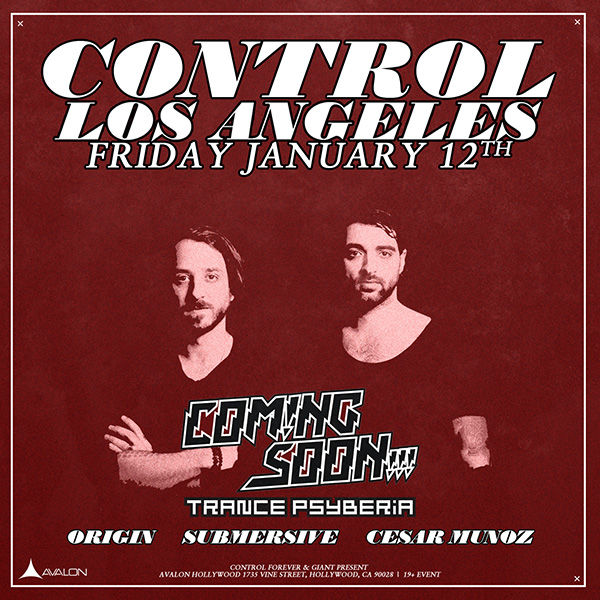