Win a Pair of Tickets to Dubvision at Avalon Hollywood!

On Saturday, December 16, get ready for a full night of melodic electro house with Dubvision!

In the six years that Dubvision has been releasing singles, the Dutch duo has made a huge name for themselves. Dubvision is comprised of brothers Victor and Stephan Leicher. The two first began playing piano at age 7, but it was not until Stephan began experimenting with electronic music years later that the group was formed.

The brothers released their first single in 2011 along with their debut EP, but 2012 was the year that launched them into the spotlight. That year, you could not escape their hit “All By Myself.” The melodic and emotional sound was infectious and being played at every turn.

Since then, their careers have only gained traction. The duo has collaborated with many massive names in the scene. This includes the likes of Sander van Doorn, Dash Berlin, and Sunnery James & Ryan Marciano. Most recently, they collaborated with Afrojack to release the uplifting “New Memories” which is sure to be a mainstage hit.

Definitely check out the show if you’re into the melodic electro house sounds that they are known for! 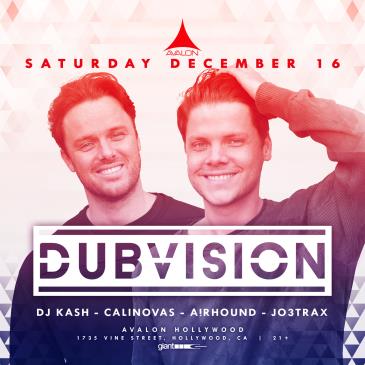 Win a Pair of Tickets to the Show:

Win a Pair of Tickets to Dubvision at Avalon Hollywood

Connect with Dubvision on Social Media: