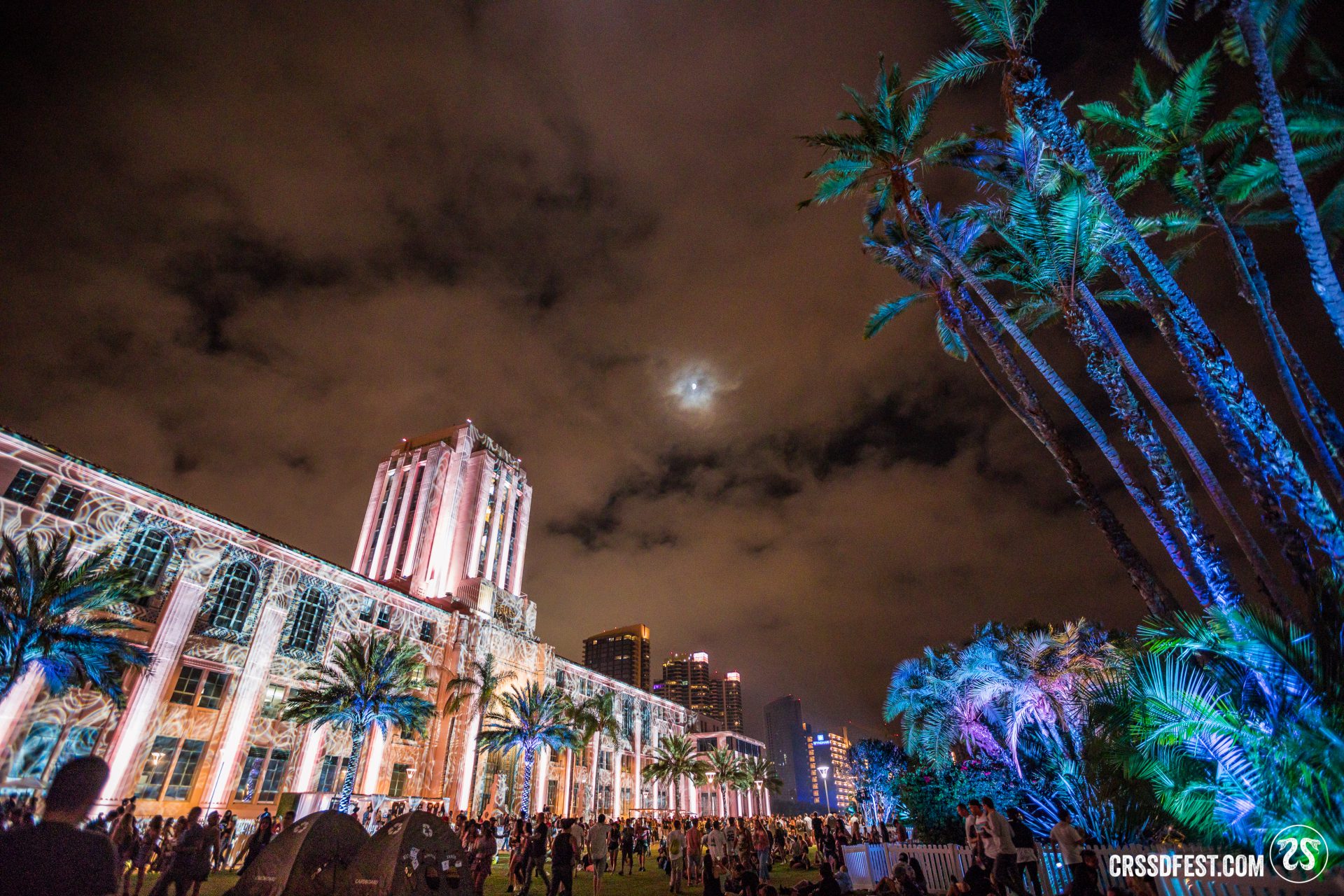 The latest edition of CRSSD Festival touched down last weekend in San Diego and offered a splendid, as expected, experience.  The weather cooperated kindly and the music rumbled from the three stages with barely a sign of the unexpected.  It appears – the CRSSD family and formula is set to reap the benefits of the maturing brand.

I’ll be honest – only a smattering of DJs really pulled me to go to the event.  One of my top picks, the biggest one I wanted to catch in fact, cancelled because of a motorcycle accident suffered while on tour.  That didn’t bum me out mind you – plenty of other talent grabbed my ears, but it did deflate the hope for a new experience at the event.

As it is now, little changed in the layout or execution and decoration of the event.  The experience, wrapped around the historic San Diego County Administration Building with three stages, remained as it had in prior installments.  Stage designs, for the two smaller stages, remained the same.  The main-stage took a greener approach with more foliage wrapping into the main stage of the Ocean View Live stage.

There were a few options I felt diminished though.  One was the partnered craft beers – there was a rather heavy reliance on both Pale Ales and Indian Pale Ales, which can cater to a segment of the San Diego beer circuit, but it felt for a festival that relies on its daytime hours for a 21+ crowd that there were few real daytime beer options.

The other was in partnered restaurants.  Now this may have been a consequence of bring the Enter.Sake experience to the Festival, but having only two local boutique restaurants just felt like a bit of a let-down.  Sure – the expected Bang Bang booth was right next to the Enter.Sake booth, but the only other local hot-spots were Napizza and Lola’s Lumpia.  The only other eating options at the festival were expensive food truck fare that ranged from $8 pizza slices to $15 French Fries.

New Experiences To Mix With The Matured

That stated – a few new opportunities worked really well.  Although I personally did not attend the CRSSD Express experience – a chartered three-hour train car “club experience” from Los Angeles to San Diego hosted by Red Bull – word on the street is that it was a great hit for those lucky enough to get the chance to ride down to the festival.

The hosted happy hour by Richie Hawtin for the Enter.Sake brand also was a great success and brought something new to the festival.  Since Bang Bang is a local establishment tied to the brand hosting the festival, it surprised me how long it took to offer the sake at the festival.  It was extremely cool though to see Richie Hawtin pouring drinks for guests and so happy about the brand and styles of sake he’s helped cultivate.  Having tried all three styles offered – Black, Silver, and Sookuu – I’d offer that Silver is the best overall drinking sake, while the other two may be better reserved for specific pallets to accompany certain food dishes.

This was also the first year I partook in the “CRSSD by Day/After Dark” events.  After the craziness of two days of CRSSD, I wound up over at Spin Nightclub for the Solardo back-to-back Latmun, Detlef, and The Drifter after party.  It was neat to see the CRSSD logo lit above the DJ in minimalist fashion, and the sets definitely felt more at home for the artists involved than some did at the festival itself.  Detlef engaged the crowd in an environment that felt more in tune with his style of deep and dark Tech House.  Truthfully, it makes me excited to take a stab at another after party in future installments.

As I stated earlier, there was no single draw that sold me on the initial line.  Despite this concern there were numerous sets I found myself grooving to.  Here are some of the surprising moments I experienced over the weekend:

Stream Chris Lake’s “I Want You” below:

Stream Elohim’s “Hallucinating” which is still ringing in my head today below:

There were a few issues however – the most glaring of which was the vibe transformation from Destructo’s set into Emancipator’s set.  Don’t get me wrong – both acts did an admirable job of living up to the expectations of their crowd, but the rambunctious G-House of Destructo into the mellow beats of Emancipator stood out as a programming nightmare in executed experience.  A little better attention to flow of artists could go a long way to making a more succinct experience. Prok & Fitch also felt a bit out of place for the style of music they went far given the time slot.

CRSSD Has Stability That Now Misses Out On Spontaneity

If there is one thing everyone tends to agree on, it is the magic that gets lost as time marches forward for many festivals.  When CRSSD pushed to a twice a year event, people wondered if that would dilute the experience.  I don’t believe it has.  Has it offered up the same magic as the first two editions of the festival?  I’m not sure.

The venue remains beautiful and executed upon as well as can be expected. Truthfully, part of that lies in the fact that there are so few events that truly take place by the bay or ocean these days.  Has it tied in other brands well? Certainly – seeing that the ENTER. brand and in the past the Dirtybird Crew have offered up enticing lineup per hosted stages, there is no doubt that the brand inclusion helps bring crowds.

Yet, a part of me sits here having experienced CRSSD many times in the past that perhaps the original magic was brought by offering something the rest of the market cast aside – Techno & Tech House.  That certainly isn’t the case with the market these days – with brands like Awakenings and Factory 93 engaged heavily in the music. Likewise, the festival has equally grown more expensive for people to attend – whether via on site expenses or ticket prices.

So, what can the festival do to make that spontaneity come back?

I’m not truthfully sure without an overhaul of the stage crafted experiences.  CRSSD, and its parent FNGRSCRSSD, has a very devoted following to a very distinct sound, which works wonders in a club environment, but may not be sustainable over the coming years as other players continue to emerge to take on its market segment.  Certainly, the festival’s proximity to something like “Dritybird Campout” may have hurt its market appeal as well.  Time will tell, that much is assured.  Until then, I look forward to dancing in the water fountains near the bay about six months from now at the next CRSSD event.