On Saturday, September 23, get ready for a night full of trance with Will Atkinson, Eddie Bitar, & Trance Psyberia at Avalon Hollywood!

Will Atkinson is one of the most dynamic trance artists in the game. Though he’s primarily a trance DJ, his sound encompasses multiple genres. A Will Atkinson set effortlessly infuses tech trance, psytrance, breaks, and progressive for an unreal experience! Music runs deep through his veins as Atkinson has been producing since he was 14. His productions have even been signed to some of the biggest labels in the scene like Armada, FSOE, Subculture, Vandit, and Spinnin Records.

He is responsible for over 100 BBC Radio 1 air plays and numerous Beatport number ones. His discography is full of hit records including “Pat Butcher”, “Victims”, “Numb The Pain”, “Fresh Meat” and most recently his remix of Dogzilla’s “Without You”. Atkinson is also one-seventh of the elite VII collective, a record label that promises to push the boundaries of electronic music. He does all of this along with playing festivals such as EDC Las Vegas, Dreamstate, Luminosity, and many more.

To top it all off, Will has staked claim to many remixes of productions created by none other than the biggest names in trance such as Paul Van Dyk, Ferry Corsten, Aly & Fila, John O’ Callaghan, Giuseppe Ottaviani, Simon Patterson, and Alex M.O.R.P.H.!

Stream Dogzilla – Without You (Will Atkinson Remix)

Eddie Bitar and Trance Psyberia will be supporting WIll Atkinson at Avalon Hollywood that night to round out the lineup.

Eddie Bitar is a rising star in the trance and psytrance world. His ability to blend the former sounds with tech gives him a futuristic and innovative sound. Bitar has garnered support from the likes of Armin van Buuren and John O’Callaghan as well as Vandit Records, and Armada to name a few.

Win a pair of tickets to the show!

Win A Pair of Tickets to Will Atkinson, Eddie Bitar and Trance Psyberia @ Avalon Hollywood 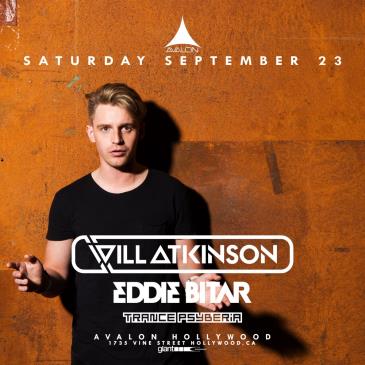