This year was Life in Color Miami’s 10 Year Anniversary, which also happened to be my first experience. Having never attended before, I did my research and looked at the past events to see what I could expect. For me, it has always been exciting to go to an event for the first time and this was no different. I knew I was going to get slimy and covered in paint at Life In Color, so I didn’t wear or bring things I normally would to an event. My phone and personal belongings definitely stayed in my backpack throughout the event, along with most of my friend’s things that they didn’t want to get paint on.

I live about 15 minutes from the venue but knew of a friend who was only walking distance, so my group and I all met up in the Wynwood district. Mind you that it was a beautiful day outside, which was great because in Miami it can be sunny one moment and pouring and cold the next. We left his house around 3pm to head to the venue and explore it for a little bit before I planned on catching Bonnie X Clyde who I was looking forward to seeing. Surprisingly, the line for security was not long at all and super easy to get through. To be honest, security could have been a little more thorough, it felt like it was almost too easy to get into the venue. One thing that immediately drew my attention was hearing ambulance sirens already blaring as I entered. It is always awful when you hear sirens that early, and knowing it was a 16+ event my heart sank a little, knowing it could have been someone that age.

Right when my group and I entered the venue, we headed straight to the bar to get stocked up with a drink or two. The bar was easily accessible, which was nice, and lines were never long, most likely because it wasn’t a 21+ event. Moving from stage to stage seemed to be pretty easy, making it convenient to jump between sets. I also enjoyed that the venue was not overcrowded, leaving more room for me to dance. One of the only negatives that I noticed was that there were not as many activities as I was expecting. They did change the venue this year, so I do give them that, but when looking at previous years and knowing this was Life In Color Miami’s 10th Anniversary, I was expecting to see the Ferris Wheel, zip line, and more return. Activities that were there included a wall where you could sign, kandi making station, and a “wish tree” which I thought was pretty unique too. People would write their wishes and tie them to the tree, which at the end of the night was filled! Of course, they also had paint stations where you could go buy paint bottles for $5 each. While we went to the bathroom, my brother immediately went, bought some, and proceeded to cover us right when we got out.

Covered in lots of paint by the time we went into the crowd, we blended right in with other ravers.

After we explored the venue to see where the two stages were located, my group found our meet up spot, got situated, and then we headed to see Bonnie X Clyde.

Bonnie X Clyde’s set was during the day so it was still nice and sunny outside. They really put on a good show and were very interactive with the crowd. I had never seen them before and they were one of the better sets of the event. I was definitely feeling the vibes! The stage performers at Life In Color Miami were also a hit, I love when events incorporate acrobats into their shows. The stage came out into the middle of the crowd, so the performers from afar looked as if they were just bouncing around on top of the crowd. It was a nice addition so the people far away would be able to get a look at the Cirque Du Soleil-type performances that you normally wouldn’t see unless you were up front or on the screen.

Check out our featured interview with Bonnie X Clyde HERE!

Bonnie X Clyde finished their set and my friends headed to the bar to re-up on our drinks. While they did that, I explored some more and met some cool people along the way. Something that bothered me was that some of the staff and security weren’t very nice or helpful during the event. When I would ask where something was or if I had a question that I needed to ask they didn’t have much to offer in response and almost acted as if I was bothering them with my question. Can’t really do much about that but I would have hoped they would have at least been a bit nicer. After a while, I headed back to my friends to meet up and check out Mija, another DJ I was looking forward to seeing. Just like Bonnie X Clyde earlier, she killed it as well. I was deeper in the crowd for her set and once we got to a good spot the beat dropped. Yet again, I was covered in a fresh coat of paint. She was just as I expected and had the whole crowd going hard with some great beats.

It had just gotten dark at this point and that is usually when everyone starts to get more wild at events too.

Illenium’s set was after Mija, and I caught a bit of that as well. Even though I didn’t stay that long for his set, from what I caught I could tell it was a great one and he had me dancing too. I think that I was expecting more of a visual show from what I had heard from other people’s experiences, but I think the lack of it was partially due to the stage he was playing on. After Illenium was Seven Lions then Marshmello and Diplo to close. Life In Color Miami’s second stage didn’t get much love from me often because everyone I was looking to see was playing on the main stage for the most part. I was bummed I missed out on some dubstep at that stage, though, but time got the best of me and I missed out on the early bass head sets. The cancellation by Young Thug also was sad, as I had listed him in my top acts to catch because I had never seen him live before. Honestly, it was okay though because I still had a great time overall seeing the other artists.

By the end of the night, I was ready to get out of there. I was covered in paint that had dried up, so I was feeling like I needed a shower immediately.

Knowing that UBER and Lyft were going to be a nightmare after the show and I didn’t want to be surrounded by everyone trying to find a way home, I decided to leave a little early to avoid that. As I was leaving I did overhear a few people saying their backpacks got slashed, which was unfortunate. That definitely has been a common occurrence at festivals all over the place but goes back to me saying there was a lack of security when entering. Not that security can totally prevent knives or box cutters from making their way inside, but if they had done a better job perhaps these people wouldn’t have had their bags slashed and items stolen from them.

Overall, my friends and I enjoyed ourselves at Life in Color Miami. It was a fun experience and the music was on point. The crowd was also pretty nice, everyone seemed to be having a great time and enjoying themselves. The event itself definitely had more of a college party vibe to it, which is what I expected and had a blast with. If you haven’t been to a paint party before, I would highly recommend checking out Life In Color here in Miami, or try it out when it hits a city near you!

Connect with Life In Color Miami on Social Media: 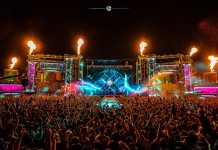 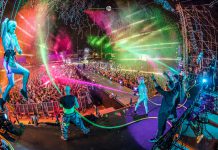 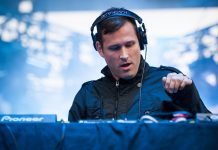