Film director Jimmie Gonzalez and executive producer John Acquaviva present The Red Man: a psychological thriller exploring themes of drug use and mental illness through the eyes of a contemporary DJ.

The Red Man is a gripping exploration of the psyche of Evan Gough, a contemporary DJ facing the demons of his own mental health while simultaneously combating the feelings many entertainers know so well: loneliness, isolation, and a growing disconnect with the scene they are involved in.

After Evan’s family was brutally attacked in a home invasion, the combination of his guilt and the mental illness he acquires from the trauma cause him to continue to have haunting visual and auditory hallucinations of his family members. Gough makes an attempt to fight his demons with prescribed medication, but also self-medicates with ecstasy. Through following his paranoid delusions stemming from his mental illness, Evan discovers that his psychiatrist, Dr. Verde, and his neighbor are involved in a suspicious plot to drug and kill celebrity tenants of his trendy high-rise apartment complex. He then teams up with Eve, his doctor’s equally suspicious intern to discover the truth behind Dr. Verde and his mysterious plot. Although the EDM scene is not the focal point of this story, few filmmakers can accurately portray it to an unfamiliar audience without oversimplifying it or relying on tired stereotypes. This film takes the cake by doing just that, and by providing a raw look at the experience of trauma and PTSD through the eyes of a compelling protagonist. Gough’s skepticism and paranoia towards the pharmaceutical industry, a feeling shared by many in the United States reiterates the fact that this film doesn’t shy away from keeping mental health in the spotlight.

Seamlessly integrating the psychological thriller genre with subject matter that was thought-provoking, this film has accomplished something that has not quite been done before. While drug use is not the primary topic or theme of The Red Man either, in a time where drug use in the dance music world is finally being discussed openly, this film arrives at just the right time. Attention is also directed to topic of mental illness, and the pharmaceutical industry’s role in profiting on something that affects nearly 20 million Americans. The film stays true to the psychological horror/thriller genre with a bone-chilling approach to sound and special effects, and is already making waves through the independent film festival circuit. The film has appeared at Macabre Faire Film Festival, Yellow Fever Independent Film Festival, PDXtreme, Nevada Film Festival, Torremolinos Spain and Blow Up Chicago and will continue to be well received by critics and fans alike.

EDM Identity was fortunate enough to speak with writer-director Jimmie Gonzalez and executive producer John Acquaviva to discuss their creative processes, and personal connections to the universal themes in this film.

Check out the trailer for The Red Man below, available on Video-on-Demand services and on iTunes now!

Jimmie Gonzalez, how did you make Evan Gough relatable to an audience that may not understand dance music culture?

Jimmie Gonzalez: It was very important to me that Evan would connect with the viewer. Whether you know the culture or not the lead protagonist needs to relate as a human being first. In the first act we set up that Evan is solely trying to overcome his personal demons and we feel for him. My earliest outlines of the script had Evan being a rock star such as a drummer or singer of a band. It was the rapid growth in the years to follow of the DJ being the modern rock star that made his profession inevitable by the time I actually starting writing. Whether you know the lifestyle or not, you have heard of the DJ. In the case of this story, even the stereotypes of today’s EDM superstar are found in Evan making the twists and turns work even better than for the traditional every man.

How did you manage to successfully construct this film to appeal to a worldwide audience outside of the EDM scene?

JG: I always felt the story was a universal tale of a man on an inner quest to find his destiny. Everyone in our demographic can relate to that. After researching and finding the works of writer/mythologist Joseph Campbell, I learned a lot about story structure not only with proven formulas but it’s comparisons to spiritual awakening. The dance music world this film lies within was mainly the mask to entertain and appeal to a broader audience. It’s for those willing to look a little deeper that I hope will find much more than on the surface.

Olivier, you constructed the sound design for this film. What did the process of utilizing specific frequencies instead of music notes to create the ambiance entail?

Olivier Giacomotto: Most of the times I used frequencies instead of notes, 19 hertz, for example is a sub frequency that is supposed to created dizziness, un-comfort, fear, and panic, mainly because I make your eye balls vibrate and make you start seeing things that don’t really exist. So that frequency was the cornerstone of the whole Red Man soundtrack, all the highest harmonics of that frequency are inside every piece of music of the movie… that’s why the result is obviously so dark, druggy, and creepy.

When designing the story and characters, did you draw from any personal experiences in the music industry?

John Acquaviva: Ha ha…Jimmie did all the writing and story but I am happy to add in that primarily the is a Faustian tale in DJ clothing. Once the story was done it is more a case of many of us connecting with those career issues and struggles. The great thing about these themes, is that they are timeless and more relatable to a group when it is framed in their world of experience and or awareness.

Was this film meant to shine a light on the mental health issues that popular entertainers often face?

JG: Definitely. Another strong theme of the film is the struggle with fame. I was especially fascinated by the conspiracies in the music industry by artists such as Britney Spears and Amy Winehouse. The connection of drugs, the occult and conspiracy theories can be found all over the Internet. Again are they one in the same? Whether its pure insanity or not you have to admit it’s interesting as hell.

Mental health is something that effects millions of people around the world and is a key theme in this film. How does this film contribute to the conversation, and what is your advice to those who may be in need of help?

JA: We certainly present this on how it can all come unraveled. We tackle the entire film in a very surreal context without giving away too much. However, in answer to your question, when ones world becomes unraveled or off kilter, a person needs to realize they are not alone and should seek help. In the film, there is a struggle with Evan wanting to tackle this on his own and apparently seemed too far gone.

The theme of distrust of the pharmaceutical industry in The Red Man is especially strong. Do you think our society, rightfully or not, is skeptical of big pharma and sees it as an industry that looks out for its own self-interests?

JG: Being that the genre is based maInly in Horror, I brought to it what I call the modern campfire ghost story. As adults I’ve noticed the paranoid thought has shifted from stories of monsters and demons to fears of government and corporations. Are they one in the same? These are themes apparent in The Red Man and meant to tap into what I feel is our ultimate roadblock to enlightenment.. fear. The pharmaceutical industry is just one of them.

The Red Man has made appearances on the independent festival circuit, Macabre Faire Film Festival, Yellow Fever Independent Film Festival, PDXtreme, Nevada Film Festival, Torremolinos Spain and Blow Up Chicago to name a few. What is up next for this film after it’s release?

JA: Being a small independent film we had no illusions that we would have a big roll out in theaters. Rather, releasing it on Video-On-Demand allows us to reach people all over the world! Be it 1 or 1,000 in any location. We took the same approach as our successful experience as an independent record label. Of course once out in the world we will continue to do some showings and events where there are a number of fans. For example, we have done a number of private screenings around some of my DJ and general travels and are happy to continue on this front.

Finally, if “Evan Go” were a real DJ, what kind of set might he play live?

JA: Evan was in the business a long time. He struggled to stay relevant and play new mainstream club culture. He realizes that late in his career he may have compromised or maybe sold his soul for that fame and success.

Since he gets taken off the decks. If he were to play again he would have to play an old school set or just something for his soul as opposed to pandering to the masses and selling out. 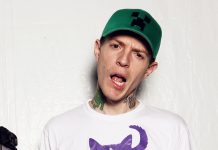 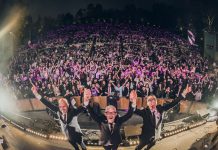