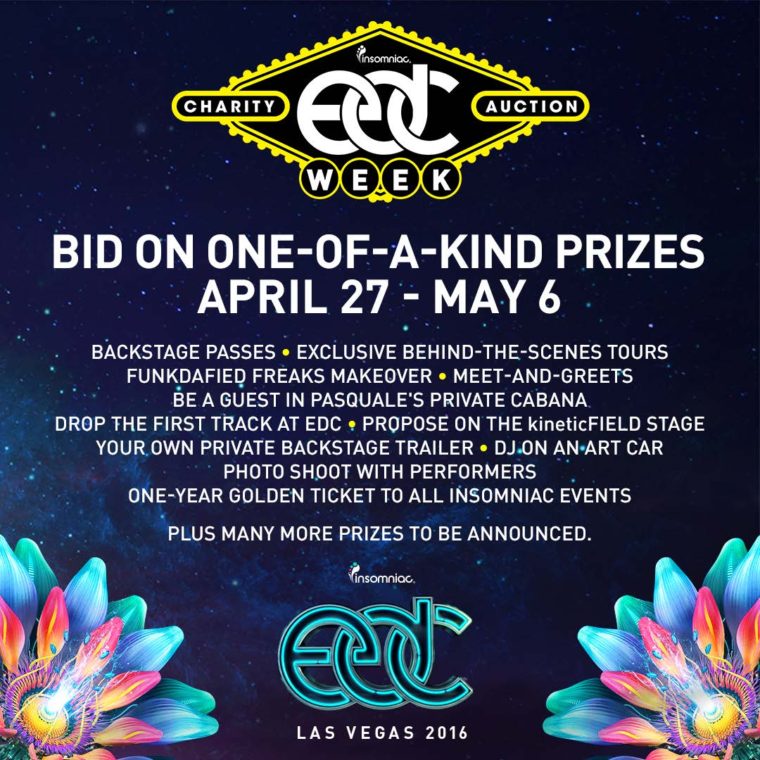 After a successful run last year, the EDC Week Charity Auction has returned once again to bring some exclusive and unique experiences for fans of both Insomniac Events and the Electric Daisy Carnival. The auction is held in with global e-commerce partner eBay For Charity, and has released the first phase of auction items for the second annual “EDC Week Charity Auction.” Beginning today, Wednesday, April 27 at noon (PST), the EDC Week Charity Auction offers fans the chance to bid on once-in-a-lifetime experiences during EDC Las Vegas – all to raise funds for local charity, The Shade Tree. The first phase of items offers enhanced access to EDC Las Vegas. Private backstage artist trailers, behind the scenes tours, backstage passes, intimate meet-and-greets, and more are up for bids now!

The Phase 1 auction will be closing Friday, May 6 at 12 a.m. (PST) so make sure to stay tuned on your bids! The second phase of artist experiences will be released for bidding beginning on Monday, May 2 at noon (PST) through Thursday, May 12 at 12 a.m. (PST).

Find out more information about the EDC Week 2016 Charity Auction below:

About The Shade Tree:

The Shade Tree is a nonprofit organization dedicated to improving the lives of women, children and their pets affected by domestic violence and crisis in the Las Vegas valley. With the money generated from this year’s EDC Week Charity Auction, Insomniac will help innovate and redesign The Shade Tree’s Children’s Activity Center (CAC), an arts and education space designed to inspire and encourage a positive and healthy atmosphere for the youth being served at the shelter.

“Being a recipient of the EDC Week Charity Auction will provide so many new opportunities for The Shade Tree,” said Marlene Richter, Executive Director of The Shade Tree. “We are beyond grateful to have been selected by Insomniac and are excited to have the opportunity to create a Children’s Activity Center that provides a safe, bright and inspiring atmosphere for the children to express themselves.”