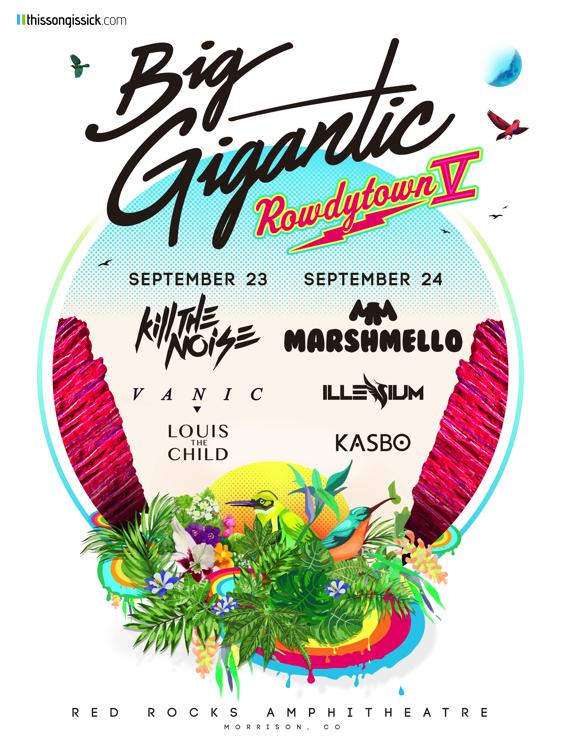 If you are a fan of BIG GIGANTIC, Dominic Lalli (saxophonist/producer) and Jeremy Salken (drummer), this announcement will surely be the best news of your day. Fresh off two sold-out headlining shows at New York City’s Terminal 5 and the release of their new single, ‘The Little Things’, BIG GIGANTIC has officially announced the details for their annual Colorado festival “Rowdytown.” The Boulder-based duo’s hometown show will return to the beautiful Red Rocks Amphitheater for a fifth year for two nights: Friday, September 23, and Saturday, September 24. Tickets for “Rowdytown V” are on sale now, here!

Since the show’s debut in 2012 it has sold out in advance every year and has hosted insane lineups with artists including: Macklemore & Ryan Lewis, Dillon Francis, GRiZ, Adventure Club, Manic Focus, Snails, RL Grime, Jauz, The Motet, and many more! The 2012 show also marked the first time an artist used projection mapping visuals on the red rocks of the amphitheater to provide attendees with a one-of-a-kind experience. The show was even voted ‘#1 EDM Show’ by Denver’s Westword in 2012.

“Big Gigantic used projections to light up the already beautiful rocks and introduced three tiers of LED screens creating a 3-D experience for everyone at Red Rocks. Their visuals blew everyone who played at Red Rocks this summer away…Overall, Rowdytown was one of the best shows put on at Red Rocks this summer. They did what they came to do-put on a great show, have amazing visuals, play good music and express the love they have for the state who made them who they are today.”

This year’s lineup has some of the hottest up and coming Producer/DJs that are sure to light up the stage. On Friday, September 23 BIG GIGANTIC will be joined by American Producer/DJ Kill The Noise, Canadian DJ Vanic, and Chicago-based electronic duo Louis The Child. On September 24 trap producer Marshmello, Denver-based melodic bass producer Illenium, and 19-year-old Swedish producer Kasbo will help close out the event.

BIG GIGANTIC are also headed out on a three-week spring headlining tour throughout the Midwest and east coast and are set to play a number of festivals including: Shaky Beats Festival, Lightning in a Bottle, Forecastle Festival, and Backwoods Festival. Check out the full list of upcoming tour dates below! Tickets for the group’s headlining shows are available at biggigantic.net.

Be sure to check out BIG GIGANTIC’s new song “The Little Things” featuring vocals from singer-songwriter Angela McCluskey. The track premiered on March 2, 2016 on Billboard.com and can be listened to on SoundCloud here! Or, downloaded for free from their website (link above).