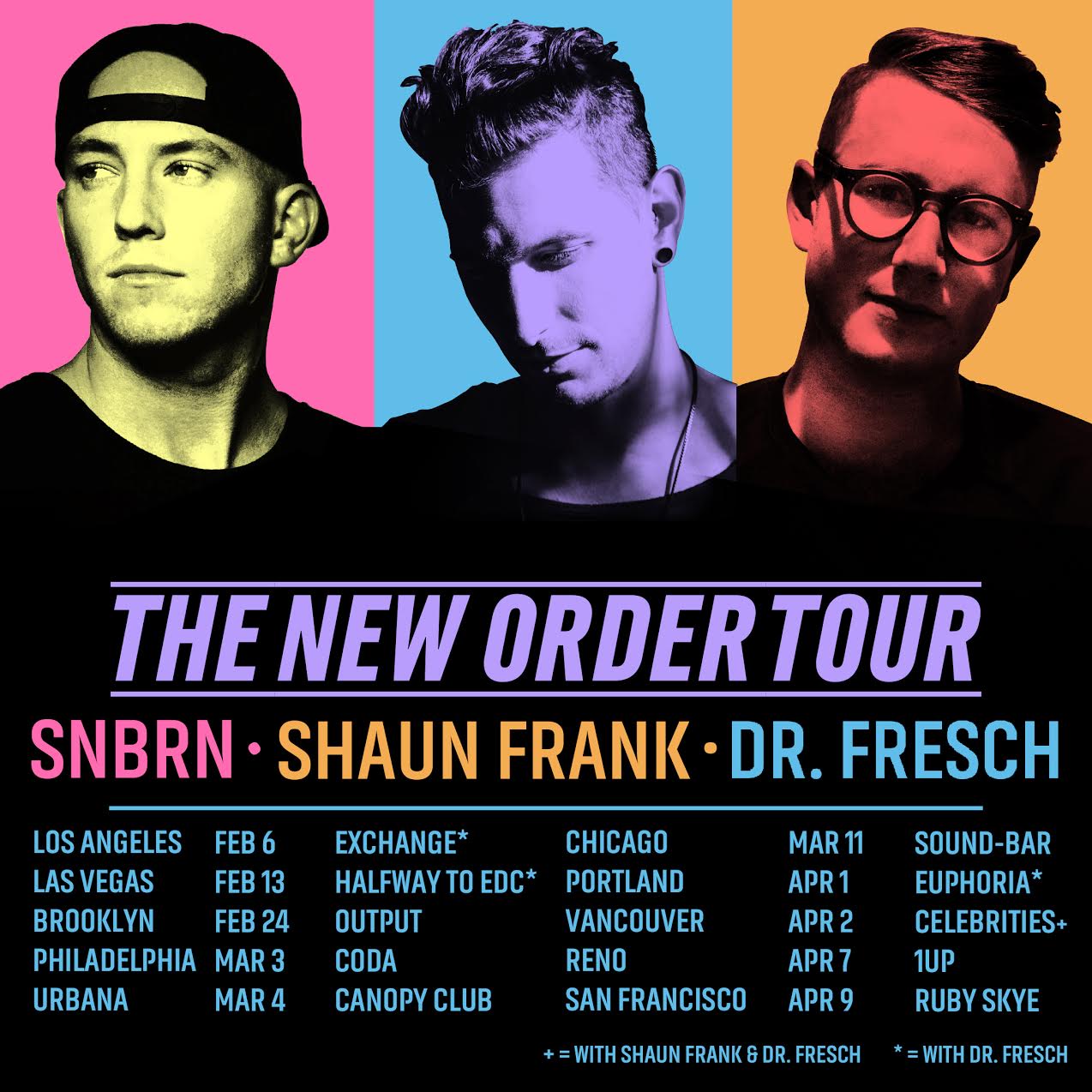 Kicking off this weekend in Los Angeles, SNBRN, Shaun Frank, and Dr. Fresch are working together in a collaborative tour, the “New Order Tour,” which will light up 10 spots in North America. The three of them are coming off of a massive 2015, in all aspects. We had SNBRN and Dr. Fresch grace the Palms stage at last year’s CRSSD. Dr. Fresch even got his podcast, The Prescription, going, which acquired quite a lot of listeners on Soundcloud. Shaun Frank is actually going to be participating in this joint project while he’s on a tour of his own for Winter Spring 2016

The idea for The New Order Tour spawned out of a series of unannounced secret late night after parties that SNBRN, Shaun Frank, and Dr. Fresch found themselves playing together when they crossed paths while on their own tours in places like Miami, Los Angeles, and Toronto. The support from fans and overall vibe of these secret back-to-back sets became unforgettable highlights for each artist in 2015.

With momentum building behind the idea of a tour, a growing fan base, and the spring fast approaching, the idea to collaborate on a track that complimented the three differentiating styles of house into one single started to take shape. It’s a track that reminds me of Jack Beats, and it clearly shares elements from each of the artists. This tour will definitely make a splash, and is going to get the attention of current fans of Night Bass and will even likely appeal to fans of Dirtybird.
You can check out and download the new track, “The New Order” here

The artists also had a few things to say about the new track:

Shaun Frank describes, “Working with Kevin (SNBRN) and Tony (Dr.Fresch) on this track was as fun as our random after party sets. We all just got together in one room and vibe’d off each other like we do when playing B2B. We all bring something different to the table musically, but it collectively comes together for one dope experience.”

SNBRN goes on to add, “It’s an amazing feeling to come together with your two close homies and write a song from scratch. This collaboration was long overdue!”

Dr. Fresch spoke on what can be expected on any one of the stops along the tour, saying, “The New Order is a reflection of all three of our styles within a club environment; a perfect homage to the tour and single.”

The tour kicks off this Friday, February 6th, at Exchange in LA. Other dates include:

Stay up with news on these artists via social: