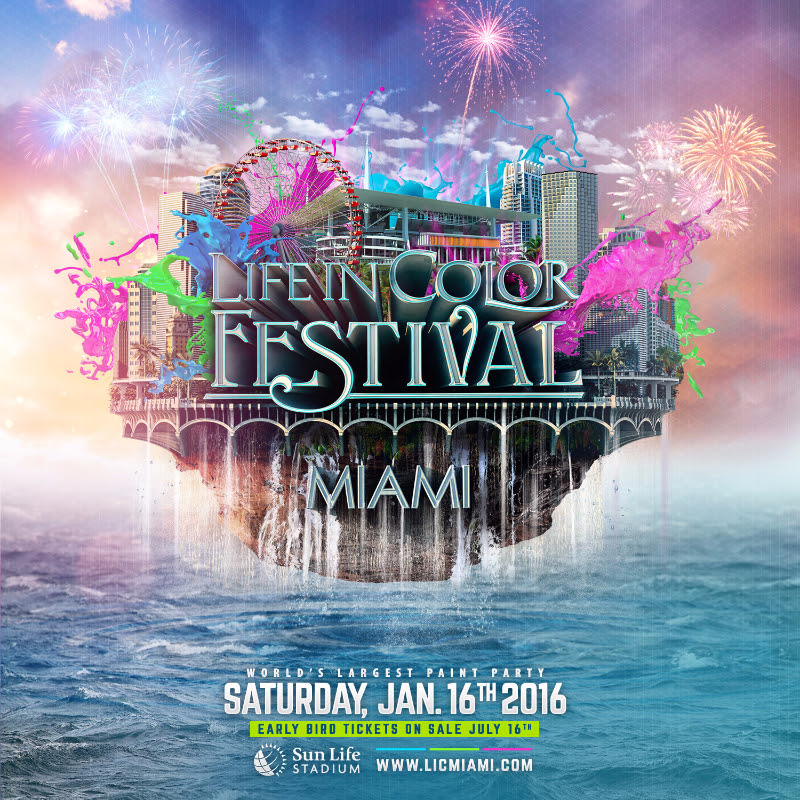 This year for Life in Color Miami, our group started out our experience with some hiccups, but later turned out to be one heck of an experience.  Life in Color Miami outdid itself this year with the layout and adding more things to the overall experience. I’d like to start out by apologizing that I didn’t get many pictures. I mainly kept my phone away in our locker because I didn’t want it to be ruined by the paint, and I didn’t have a bag/fanny pack to keep it in. Our experience first started around 1:30 when my two friends and I arrived at Sunlife Stadium. As we walked towards the entrance, we noticed that the line started to get longer and as 2:00PM came and went, the line would go in spurts.We remained stagnant for a little bit at different points. One of my friends had a panic attack because we were remaining still in the crowd for so long. We then exited the line and went to go sit next to a tree in the shade where we watched people come and go. While we were waiting for the line to calm down, we met an awesome photographer/videographer named Russell, and one of the Acrobats. Both were really awesome guys. While we were waiting, we noticed two Alpha units get called because of people not knowing when to slow down on pre-gaming.  KNOW YOUR LIMITS!!!! Both ended up leaving in an ambulance and they hadn’t even gotten into the venue yet.

Theere was a lot of confusion in regards to totems for LIC Miami.  A lot of poles had been confiscated, when most of them met the guidelines. In the guidelines posted on Facebook/Instagram it stated: “Totems must be made from a lightweight material (Foam/PVC).” The totems we saw met guidelines, but were immediately confiscated. Security denied every PVC pole. A lot of miscommunication was happening and it was very confusing.

While we were outside we also noticed there was an airplane flying around promoting for Ultra Music Festival, and attached to the banner was another banner that read, “We’ll see you when you turn 18.”  I found this freaking awesome and quite ironic since Ultra Music Festival used to be a 16+ event until it changed its policies in 2015 to 18+. One of my friends from @FloridaEDMFam even posted about on their twitter account.

After getting everything situated with my friend who had the panic attack, then meeting up with the rest of their squad, we finally headed into the venue. Once we walked in, I already noticed so many differences from the previous year. Once I got through security (they confiscated all of my glow sticks even though it wasn’t mentioned as a prohibited item), I went to go grab my locker.  A locker was a godsend for this festival. At only $18.00, it wasn’t a bad idea to get one. Plus, I could put all of my valuables away, including a sweatshirt that I would actually need later on. After getting that situated, I was down for whatever until 6:15pm when the first artist I wanted to see went on. One of my other friends arrivedaround 5pm and I met up with her and we just walked around. Exploring the different stages was fun. This year they had 4 stages. Raging Kingdom (MainStage), Underwater Kingdom, Sphere Kingdom, and Spirit Kingdom. Raging Kingdom was amazing. Seeing the lion come to life was beautiful. Actually being able to see it in person, I was able to pick up on the small details. The entire face of the lion was inflatable, which made it even cooler.

While walking around, I ran into so many of my friends I have met at previous gatherings and festivals.  For instance, I ran into one of my friends that I have a strong spiritual attachment to, and this is among the last of the music festivals she will be attending.

Among the others I was able to hang out with, was a spirited group that I met through the couple I was with who are friends with a group of my other friends.  It’s amazing to realize how small of a world the festival community is. I also ran into my friends from Plur Warriors. Another reason why I love this community – so many of us go to the same festivals.  It is really a time for all of us to see each other and it’s amazing. While exploring the festival grounds, one of the coolest things my friend and I came across was the Sphere Kingdom. Inside the Sphere on the ceiling was a fire plate that constantly had fire burning.

The first artist I really wanted to see was Ruby Rose. After hearing about her from a friend, I had to check her out. Before Life in Color, I checked out some of the sets she had posted on Soundcloud, and I wasn’t disappointed. Her style is one that I truly enjoy listening to. Once she came to the stage, she threw down and I really enjoyed listening to her DJ’ing style. She adds her own flare to popular music and it’s freaking awesome. She also played some of her own music as well. She definitely didn’t disappoint, and exceeded the expectations I had for her.

The next artist I had to see was NGHTMRE. I must say that this is one artist that blew me away. I wasn’t originally going to see him. I really didn’t know anything about him until my friends mentioned him. I started doing some research about him and started listening to some of his music beforehand. I will definitely want to see him perform again in the future.

Once NGHTMRE was finished me and my friend Maria walked around.We couldn’t really stay in one place too long. We met up with some of her friends throughout the night, and always constantly ran into random people I knew. It was hilarious finding out how many people I really know through different festivals and social media.

The other artists I had seen that night were Jack U, Keys N Krates, and the beginning of 3lau. I say the beginning of 3lau because then it started to rain… and then it started to pour. At that point, my friend Maria and I decided to go take shelter under the Celebrate Safe tent. While we were trying to get out of the rain, we were basically on the edge of the tent and there was a girl sitting down next to me. After awhile, the celebrate safe folks were trying to get people out of the tent and started to inform festival goers that they needed to seek shelter else where. One woman was even forcefully pushing people out. Once I heard her asking us to leave, I started to move out. I was trying not to step on the the poor girl sitting down next to me when I felt a sudden aggressive push from the Celebrate Safe women. I’m sorry but in no way should you aggressively push someone who is clearly trying to comply peacefully with your directions. With the wrong person, that’s just a fight waiting to happen.

After we left that tent, we went to another tent so that I could text the other two people from our group. At that point we decided to leave. Due to the rain, we were all cold. Plus we had to get dressed and get ready to go to South Beach to see Borgore (check out my review of Borgore at Icon). Believe me, if it wasn’t for the rain we would have stayed.

Overall, Life in Color was fun and it was a great experience, even though we did have some negative experiences. The awesome experiences we had made up for it. I will attend this festival again because of the experiences and the changes they made to the overall event were positive. To those going to the LIC tour in a city near you, your Kingdom awaits!

Did you go to Life in Color? Let us know in the comments!