BLASTERJAXX teams up with ID&T to bring MAXXIMIZE NYC! 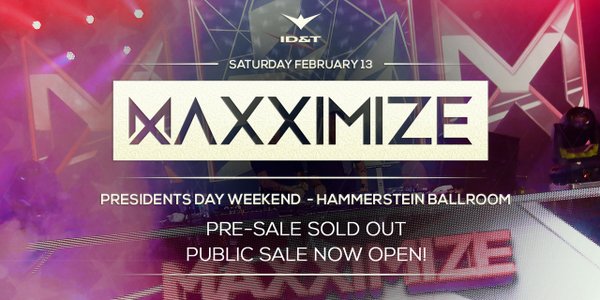 Extended holiday weekends that gives regular 9 to 5’ers a longer break usually means awesome single day or even multi-day events around the US will take place. Now that the winter holidays are over, announcements for 2016’s holiday weekends are popping up, and here on the east coast, things are already in motion. BLASTERJAXX is teaming up with ID&T Events (TomorrowWorld, Mysteryland, Sensation) to throw MAXXIMIZE NYC. The event will be bringing Firebeatz, MOTi, Jewelz & Sparks, Zaxx, and Lestat to New York’s Hammerstein Ballroom.

All of these artists were hard at work last year; Firebeatz dominated Beatport charts and tore up club events around the world, Jewelz & Sparks released several successful tracks on Spinnin’, Musical Freedom and Doorn, and MOTi’s powerful big room sound which needs no introduction. Rising East Coast locals Zaxx and Lestat will bring their own blend of progressive house to round out this lineup with Blasterjaxx headlining as they return to NYC for the first time since selling out Governor’s Island in August of last year. With this insane lineup paired with event producers who rarely bring large scale audio and visual production to club events, at a historic venue like the Hammerstein Ballroom, this party is sure to set itself apart from a typical club event. It’s also worth noting that this event falls under the same weekend as Valentine’s Day and President’s Day, and New York Fashion Week 2016 will be going on at the same time as well. This means that movers and shakers of NYC will be ready to party – and these events are sure to bring many interesting people from all over the world to town.

MAXXIMIZE NYC isn’t until next month, but pre-sale tickets are already sold out!! Purchase tickets today by clicking HERE!