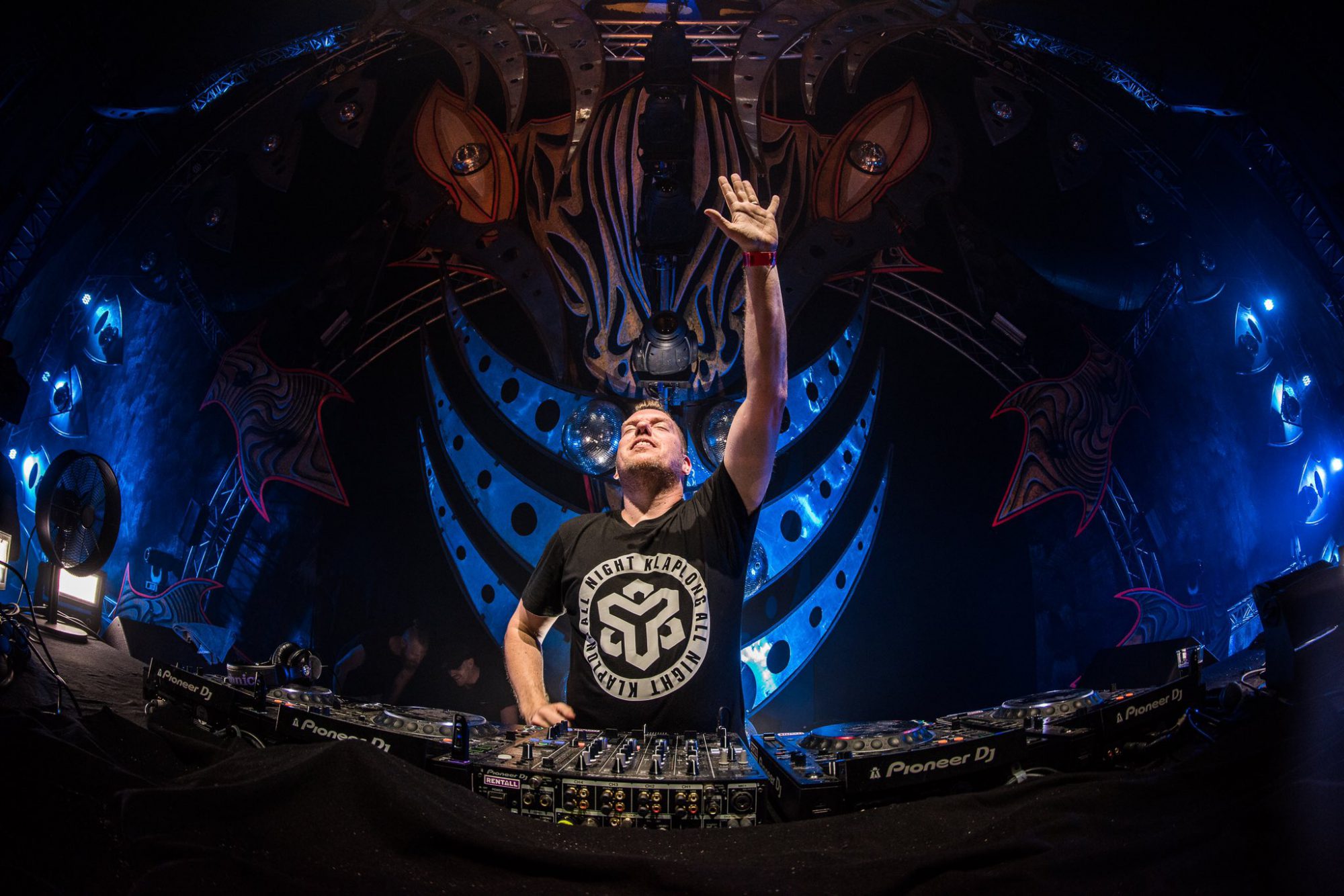 Hard Dance trailblazer DJ Thera shares his journey in the scene, his record label, and his outlook for the future of hard dance music.

Pieter Heijnen, known as DJ Thera, is a godfather in the hard dance music scene. After his split from Brennan & Heart, this Dutch producer began to release tracks independently as DJ Thera under his record label Theracords founded the same year. Not only does this genre-fluid genius spend hours in the studio, but he has also been invited to several global bookings at festivals such as Defqon.1, Decibel Outdoor, Hard Bass, and The Qontinent. In addition, he has many anthems under his belt for events such as Dance Valley, Ground Zero, and Beat the Bridge.

Although known for his highly contagious energy on stage, DJ Thera is also recognized for his two-part albums From The Heart, four independent albums produced, and one record label album. Atop these successful albums, he has over a whopping 200 other releases and remixes since 2000, when he began his music career. Constantly pushing the limits of hard dance, both his record label Theracords and independent releases walk the lines of hard trance, industrial hardcore, raw hardstyle, and more.

With an impressive resume, DJ Thera persistently remolds the DNA of hard dance sound. To share his multi-faceted talents, he plans to stop by Decibel Outdoor, Outdoor Stereo, and Dance Capitolium for the remainder of 2022. Although most of his gigs are in Europe, he has also helped grow the hard dance scene across the US, and we look forward to his return.

Before he embarks on the next leg of the year, we caught up with DJ Thera to chat about his perspective on the US and global hard dance scenes and hard dance genre evolution. Check out his track “By Your Side” with Nova Jae read on for a deeper look into his career and personal outlook.

Stream DJ Thera – “By Your Side” (feat. Nova Jae) on Spotify:

Hi DJ Thera, thanks for taking the time to chat. We look forward to learning more about your music, label, and thoughts on the hard dance scene. Since igniting this project about 15 years ago, the sound of hard dance has shifted dramatically, especially in rawstyle. Can you give us some insight into how these changes have shaped your music and your journey as an artist?

Technically I started my music career in 2000 when the term hardstyle wasn’t even out there yet, so you could say I have witnessed A LOT of shifts, haha! Personally, I don’t like all the different genre names out there. Every time an artist comes up with something unique, people are immediately wanting to name it a new (sub)genre. So I actually never used the term rawstyle myself. For me, hardstyle is a wide genre that explores its boundaries by experimenting with other wide genres.

Sometimes it’s more trance-y, sometimes more hardcore. That’s what I love so much about hardstyle: the versatility. Without this constant evolution, genres would die out. I also feel it’s necessary always to explore and experiment to keep hardstyle fresh and interesting, so that has always been my approach. I go where my inspiration goes, which sometimes has been harder-edged hardstyle, but lately, it has been more toward the trance and techno side of hardstyle.

Having played some of the largest festivals in the hard dance scene, what have been some defining moments in your career that have stuck with you?

This might sound cheesy, but literally, every booking has something special. The chance to show your music to other people is something I never take for granted, and I am always very happy with every opportunity I get. Playing at Hard Bass back in 2013 for a sold-out Gelredome was obviously extremely amazing. But being the very first international hardstyle DJ ever performing in the state of Virginia last month for a small, intimate crowd also was!

I attended your energetic Raw Classics set at the Magenta stage at Defqon.1 earlier this year and had a blast. With firsthand experience in the evolution of rawstyle, what direction do you see the genre going, and what are your plans for influencing it?

Thank you for the compliment! It was cool to play tracks from the 2008-2014 era. Like I mentioned before, I don’t really see it as a genre itself. For me, it’s just a heavier form of hardstyle. There will always be a heavier and a softer side of the genre. Personally, I am not a big fan of tracks that are basically just a kick showcase with different kicks every five seconds. I prefer tracks that have a more musical approach, tracks that are a whole, tell a story, and feel like one track instead of 10 separate ones. So I would like to see that happen a bit more, which is also why I produce tracks like that and not go with the current trend.

Your record label, Theracords, has helped evolve the sound of the scene and constantly push boundaries since 2008. What are your goals for the label as it continues to put out releases and recruit new talent?

I absolutely love that our goals after 14 years are still very similar to when Theracords started, which basically is: giving artists the chance to release unique and original hard dance music. We still get loads of demos every single week, but most of the time I still have to reply that they need to work on getting a more unique and original sound. There is no need to be a copy of an artist that is already out there. Be you, let your own personal music taste inspire you, and bring something new and fresh. That’s always the main goal!

Not only does Theracords push the limits of rawstyle, but your sub-label Therabyte showed us in 2009-2010 that the sky is the limit with the techstyle and hard trance. Will this limitless sub-label be resparked?

As I showed with my releases from the last two years and especially this year, my sound is actually heading more and more into a techno/trance direction. So there is actually quite a big chance a new sub-label will emerge soon (wink wink). It won’t be named Therabyte, though, but I do like the option to have a label out there that explores the region between trance, techno, and hardstyle, slowing down the BPM and just producing music completely free in a different direction. So yeah, more news about this soon 😉

While pushing boundaries in sound, you’ve recently also pushed your own limits in introducing your own vocal talents into your releases. What was the catalyst for doing so? Can you elaborate on how this has elevated your production?

When I was creating my track “Better Now” in 2020, I wanted to have a female vocalist sing the lyrics I wrote. To give an example of how I would want them, I usually sing them myself first, so the vocalist gets an idea of how to sing them. When I did that for “Better Now,” it didn’t sound that bad, so I showed it to a few of my friends and label artists to get some feedback. I didn’t tell them it was me singing to get the most honest feedback possible, and to my surprise, they were all like, “Wow, that’s awesome; who’s the singer?”. That gave me the confidence to actually use my own vocals, which I did again for my track “Wait For You.”

I usually write the lyrics for my tracks myself, but to actually also sing them myself definitely created an extra dimension which I really like. But I also don’t want to overdo it as I also love working with other vocalists. I will definitely sing again when the track feels right for it, though!

DJ Thera, you’ve traveled around the world for bookings each year. Can you give us insight into how hard dance is evolving on a global scale?

The differences globally are extremely big. In some countries, hard dance is fully accepted and has a huge following. But in some countries, it’s very unknown, and it’s very humbling to be able to give people their first hard dance live experience. I do strongly believe hard dance music is the best music to go completely crazy on the dance floor with. So I am definitely not done with traveling around the world and creating new hard dance memories!

With the rise in popularity of hard dance music in the US, what direction do you see the hard dance industry heading here?

Having played in different regions in the USA, there is definitely a difference. I feel the west coast has a bit heavier taste in hard dance music as the music has been around there a bit longer. On the East Coast, I absolutely love that I can bring more diversity, combining hardstyle with more trance and techno influences. I feel that a diverse approach is something that can work very well in the USA as a whole. With more variety, the music will be a bit more accessible for people that have never heard hardstyle before. I am more than happy to be the ambassador of that, hahaha!

Having a US Visa, a hot commodity in the European hard dance industry, what are your plans for future events in the US?

I am very grateful to have my US work visa. I want to share my gratitude by giving a quick shout-out to the awesome team of Forefront Agency who made this possible. As for my plans for the US, it’s actually very simple: I would just love to perform in the US as much as possible. Promoters can, of course, get in touch with Forefront (zach@forefront.vip), and let’s make the hard dance scene in the US bigger and stronger together!