After two long years of waiting, Relentless Beats has officially unveiled the latest edition of Phoenix Lights, but with a twist. Set to take place on April 1-2, the festival is now dubbed PHXLIGHTS: Altered Orbit and will move to the Phoenix Raceway. While further details in regards to the new layout for this venue and more are still to come beyond the news that the superstructure stage will make its reappearance – the lineup for the festival has been revealed and it’s filled to the brim with talented artists.

On Friday, April 1, PHXLIGHTS: Altered Orbit is set to bring the dynamic sounds from GRiZ to the stage along with bass behemoths Liquid Stranger and Rusko. Additional artists joining in on the fun that day include Champagne Drip, Smoakland, and PROPER. who have all been ascending through the ranks of the scene at a rapid pace.

The second day of the festival is set to pack plenty of heat as well with trap god RL Grime headlining the night along with other massive artists in the scene like Zomboy and Flosstradamus. Jantsen, Leotrix, and SAAS are also set to play that day to make this a ride into the bass realm for the ages.

Head over to TIXR to grab your passes for PHXLIGHTS: Altered Orbit and let us know if you plan to attend in the comments. 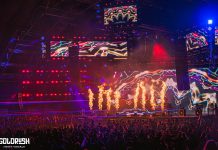