Elohim has teamed up with Chase O’Black and Ingenuity Studios to create an incredible music video for her banger, “Braindead”.

Since the debut of this artistic entity, Elohim has cemented herself as an unabashed voice in the music scene, pointing attention towards the crisply human, relatable struggles surrounding mental health. The newly-released music video for the brightly troubled “Braindead” acts as a megaphone for her cause, outrageously depicting the inner-workings of Elohim’s hyperactive mind.

The title track to her seven-song EP that dropped earlier this year, “Braindead” explores the avoidance tactics deployed by the masses in order to escape their overwhelming realities. Drugs, alcohol, and anxiety litter the verses surrounded by a driving bassline and bouncy production. The song’s thesis, “We’re all braindead/looking for something to numb the pain” leads a more anthemic chorus, as Elohim takes solace in the fact that she’s not alone in her battles.

Produced by Freenjoy, Elohim again called on the directing efforts of Chase O’Black, the visionary behind the striking “Fuck Your Money” visual interpretation. Ingenuity Studios provided rich animation for the video, which is conceptually simple and follows no arc, but is riddled with discorded imagery that smoothly parallels the lyrics. Fluorescent butterflies, fully-bandaged faces, and “happy pills” star alongside many different versions of Elohim on a wild ride through her consciousness.

Make sure to watch the full video below, keep your eye out for more Elohim, and read on for a brief explanation from Elohim herself to the video’s meaning!

Watch the Official Music Video for “Braindead” on YouTube:

“As an artist I’ve been really lucky to work with such brilliant visual creatives that enjoy bringing my wild brain to life. Going through life with an extra active brain can be exhausting resulting in feeling braindead. This video represents that active brain.”

Elohim pledged to donate 100% of the EP’s proceeds in May to a collection of charities centered around outreach and support for those struggling with mental health issues. She has also established a genuine open connection with her fans through social media, encouraging them to reach out and offering therapy sessions to those in need.

Her team is also in the middle of releasing a docu-series offering a very personal look at Elohim’s everyday trials with mental health. You can follow the series on YouTube.

Connect with ELOHIM on Social Media: 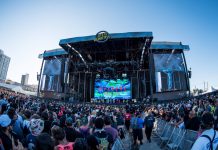