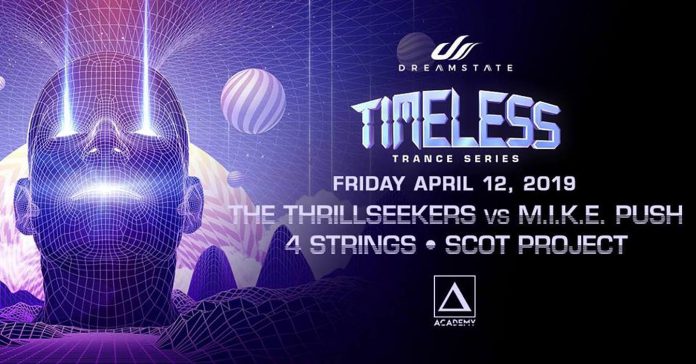 On Friday, April 12, join The Thrillseekers, M.I.K.E., 4 Strings and Scot Project for a night of timeless trance music!

Academy LA absolutely blew us away with their amazing lineup for the Timeless Trance series. This year they’ve already had numerous big names on their main stage but this latest bill is absolutely stacked with talent. Trance fans should definitely make it out to Academy as Dreamstate presents their Timeless Trance Series with The Thrillseekers, M.I.K.E., 4 Strings, and Scot Project!

Classic trance fans will never forgive themselves if they miss the special back-to-back set featuring The Thrillseekers and M.I.K.E. Both are trance legends who drop a fair bit of classic and uplifting trance into their sets. Steve Helstrip aka The Thrillseekers released his enchanting track Synaesthesia back in 1999 and since then he’s released beautiful and melodic sounds ever since.

Dutch artist M.I.K.E. is beloved in the trance community. With his plethora of aliases, he has released some of the biggest and most iconic tracks. His discography boasts beautiful melodies and sounds from the likes of classics such as Strange World and Universal Nation to his most recent and unbelievably stunning album “Together We Rule The World” which spawned one of last year’s most amazing tracks My Brightest Stars.

Rounding out the line-up are two massive acts on two ends of the trance spectrum. 4 Strings are true masters of vocal trance! Best known for their classic hit, “Take Me Away” the duo truly captures the audience and takes them on a beautiful melodic journey. Finally, any hard trance lover needs no introduction to Scot Project. With tracks such as “U” and “O (Overdrive)” Scot Project is single-handedly responsible for some of the best hard trance tracks and inspiring the new generation of hard trance artists in 2019’s hard trance revolution.

Grab your ticket to the event via Eventbrite and enter our contest below for your chance to win a pair!