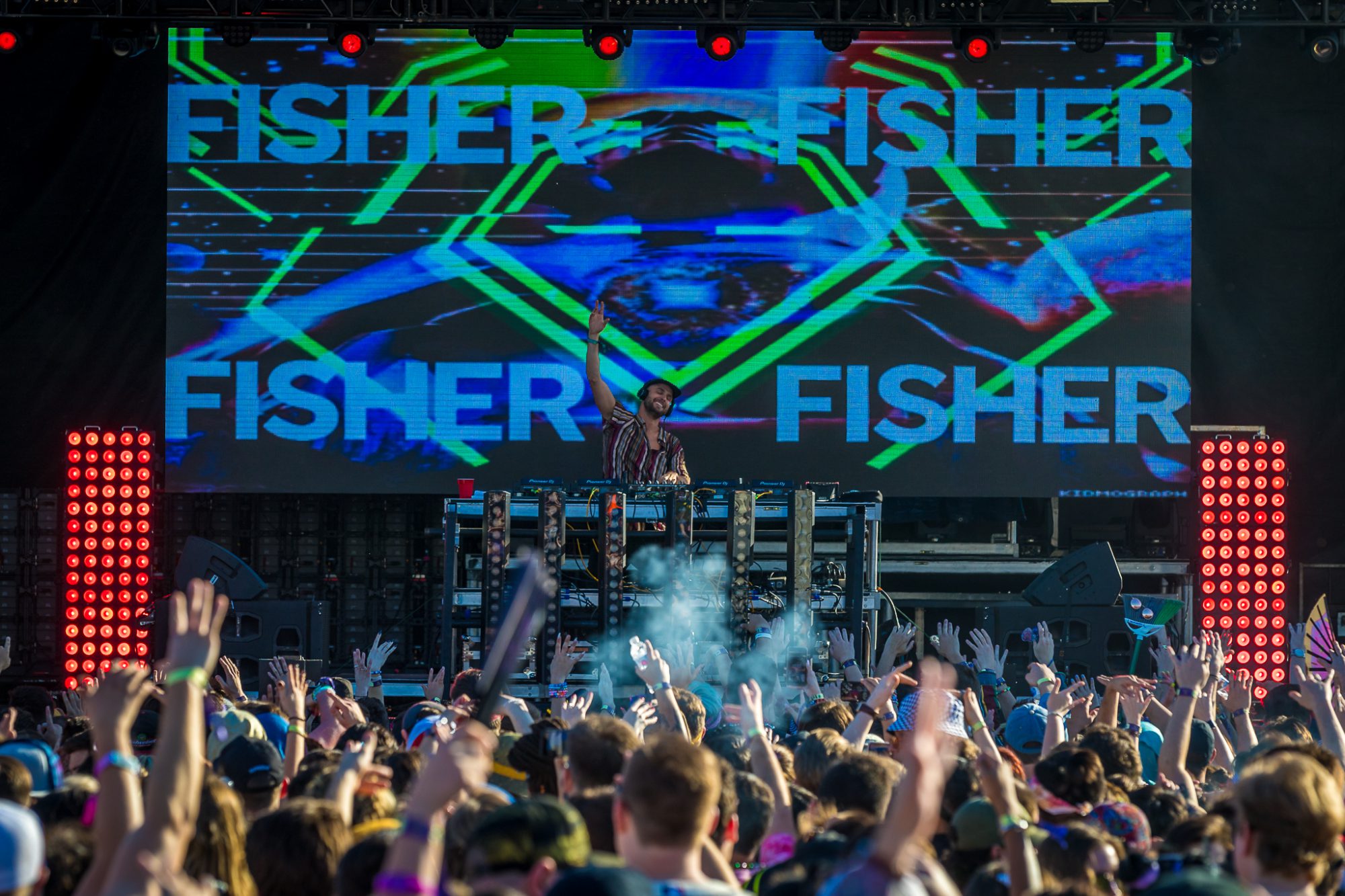 For two days, New Orleans hosted The BUKU Project, an immersive cornucopia of music, art, and a beautifully eccentric blend of people and vibes.

Coming from someone who prefers several day-long camping festivals, two-day city festivals can be a gamble. There seemingly isn’t enough time to be fully immersed in the festival experience, and city festivals (especially ones with multi-genre lineups) attract a mixed crowd. Before venturing on the 12-hour journey to The BUKU Project, I had my doubts about the fest. By the end of the weekend, I felt a deep appreciation not only for the city of New Orleans and its rich culture but the cohesive community and magical moments BUKU birthed.

Our journey began the night before the first day of BUKU. Several bags of chips and countless bass-heavy mixes later, the 12-hour drive finally came to an end as we pulled up to our hotel around 2 am. The rest of our group arrived several hours before the start of the festival, so we got ready to meet them for lunch despite running on a handful of hours of sleep.

After catching a couple of drinks and alligator bites at a bar a few blocks down from the venue, our group walked to the festival with butterflies in our stomachs. I didn’t look up the layout of the festival and had virtually no idea what this place looked like or what to expect. Getting through security barely took any time, and before we knew it, we were inside the festival grounds and making our way to our first set of the day.

Comfort is the name of my game when it comes to festival outfits, so I opted for boho flare pants and a bralette and accessorized with a pair of Kritter Klips and a body chain. From the start, my utility belt proved to be the most useful investment I’ve ever made as it comfortably stored everything I could have possibly needed. 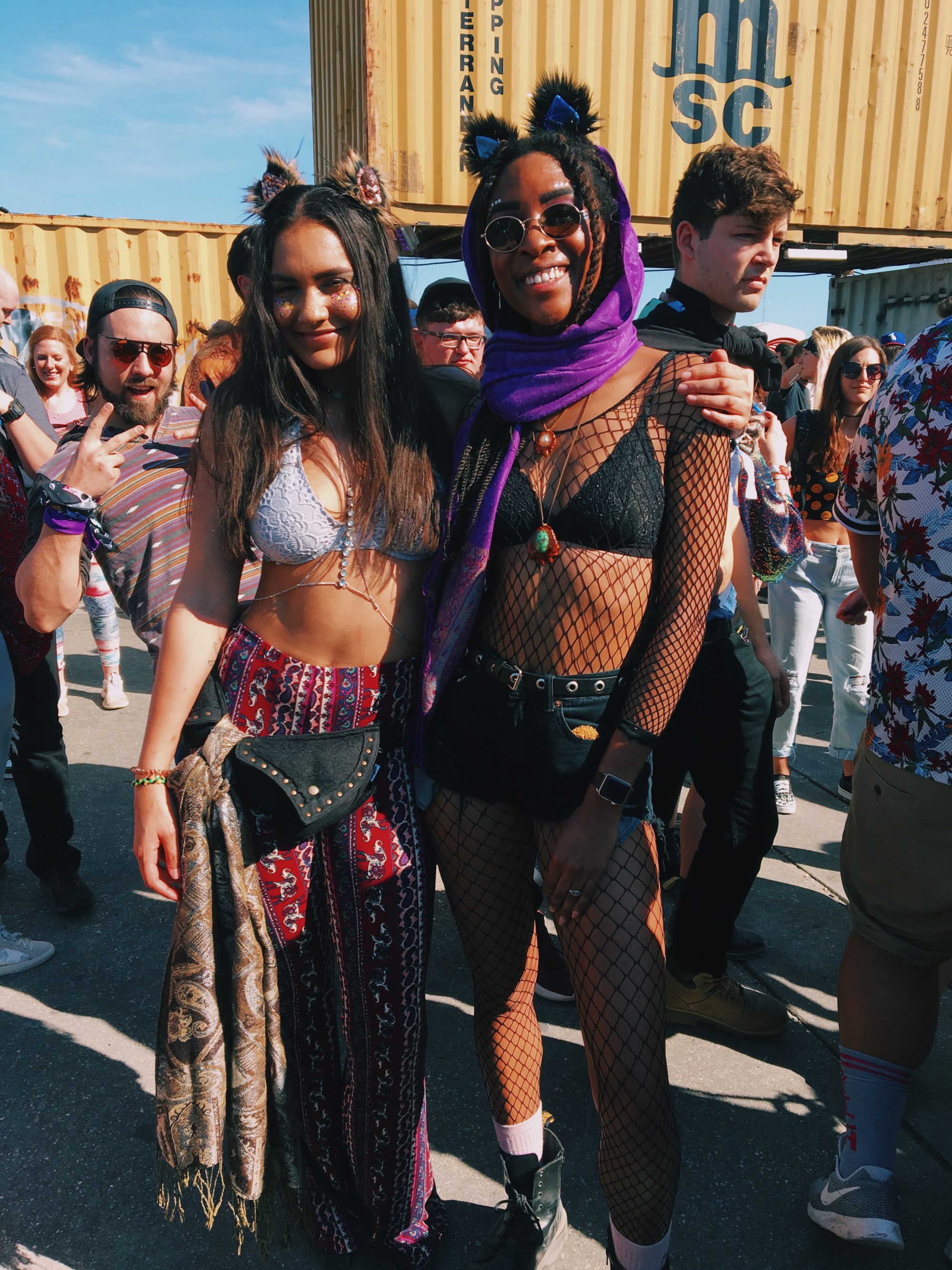 Considering this was a music and arts festival, I have to admit that I wasn’t completely blown away by the art installations and displays.

I was sad to find that there wasn’t much to the “art” aspect as I was expecting. Though I wouldn’t consider them of the same scale, I kept thinking of Electric Forest and the emphasis it places on art, and I felt that BUKU didn’t quite measure up to the same caliber. That being said, the graffiti art and colorful murals made for beautiful photographic backdrops, and I would soon come to find that while visual art displays were lacking, the real art was in the diversity of the crowd and the unmatchable vibes.

We started the day with PEEKABOO, who threw down an amazing set at The Wharf stage and wrapped it up with his highly-anticipated collab with Bassnectar.

Afterward, we grooved and shuffled our feet to FISHER before heading over to the Power Plant stage for Excision. I was apprehensive about witnessing another Excision set after I had just caught him on his APEX tour and had been disappointed to find the set was extremely similar to his Lost Lands 2018 set. Thankfully, Excision squashed any doubts I had and delivered a beautifully heavy and unique set. Including some of my favorite edits such as the mashup of “Headbanga” and Eptic’s “Bloodlust”, this set would end up being one of my top five of the weekend.

For some midtempo vibes, we wandered over to the Float Den for 1788-L, a tunneled stage with insane lightwork and lasers.

I wasn’t overly impressed with this set, but I couldn’t help but twirl in circles and dance around to LSDREAM’s “Hello Human” being dropped. Our group eventually couldn’t deny its craving for dubstep and headed back to The Wharf for what would be my first GUD VIBRATIONS set ever.

Having never seen SLANDER on their own and only having seen NGHTMRE once, I was curious to see how this set would play out. From start to finish, I was blown away by how scarily heavy this set was.

The entire crowd was headbanging and crazily throwing limbs around in unison, and some even managed to climb on top of the stacked cargo containers by the bathrooms and dance above the crowd as we all cheered them on. The set rightfully ended with “Superhuman” before sneakily transitioning into Spag Heddy’s gnarly dubstep remix of the track, ending the set on a high note and making it another one of my favorites.

Up next on the agenda was Lana Del Rey, and my inner teenage self was bursting with excitement. Lana graced the stage with her dark melodic vocals and heavenly crooning, performing classics such as “Blue Jeans”, “Born To Die”, “National Anthem”, and “Off To The Races”. Though we weren’t too intent on catching RL Grime’s entire set because we had just seen him at HiJinx, we caught a couple of feel-good tracks such as “Arcus” and “Shrine” before ending the first night of BUKU.

The night wasn’t completely over for us, though: Our group made it to Orpheum Theater for G Jones b2b Eprom, Barclay Crenshaw, and several others for one of the BUKU Late Night after parties.

Upon entering and snagging seats up in the balcony, I immediately felt the weight of the day’s events consume my body. The second Bawldy started, I knew I wouldn’t be able to last the night and ended up missing out on the remainder of the artists and returning to the hotel early to catch some sleep before the next day.

Day Two started with a bang with Whipped Cream at The Wharf.

With the sun shining and a cool breeze blowing through the crowd, it couldn’t have been a more perfect set. I was happy to hear some of my favorite tracks by her, including “Ignorant”, “You Wanted It”, “Blood”, and her newest release, “Time”. Paired with dark visuals of crawling spiders and bloodied tongue rings, Whipped Cream had one of the best sets of the weekend by far.

Up next was Liquid Stranger, and though I’ve been a fan of the freeform bass god for quite some time, this set easily became my favorite set of all time.

There truly aren’t enough words to fully capture what I experienced during Liquid Stranger’s BUKU set. From start to finish, the entire crowd had an inescapable energy that only increased in strength with each bass drop. As the sun began to set in the background, people gave each other room to bang some heads and throw some elbows as Liquid showed no mercy.

Dropping some of my favorites from INFINITY such as “Jetpacks” and “Run For Cover”, Liquid made sure to throw it back to some old-school dubstep vibes and throw in his VIP edit of “Ripple”, extracting the loudest of shrieks from every single person in the crowd and forcing everyone’s necks and spines to bend to his command. I was happy to receive his unreleased collab with Space Jesus, “Infidelta”, as well as several other heavy-hitters mixed in with splashes of riddim and DnB.

Though it was a wild set, there were moments of utter beauty and nothing less; when “Burn Like Sun” dropped, the sun had set perfectly and cast a soft glow over the entire crowd and stage. It looked like something out of a dream, and for a moment, I truly couldn’t believe what I was experiencing was real. Overall, Liquid’s set reignited a love and appreciation for music I haven’t had in a long time and was undoubtedly the most talked-about set of the weekend. 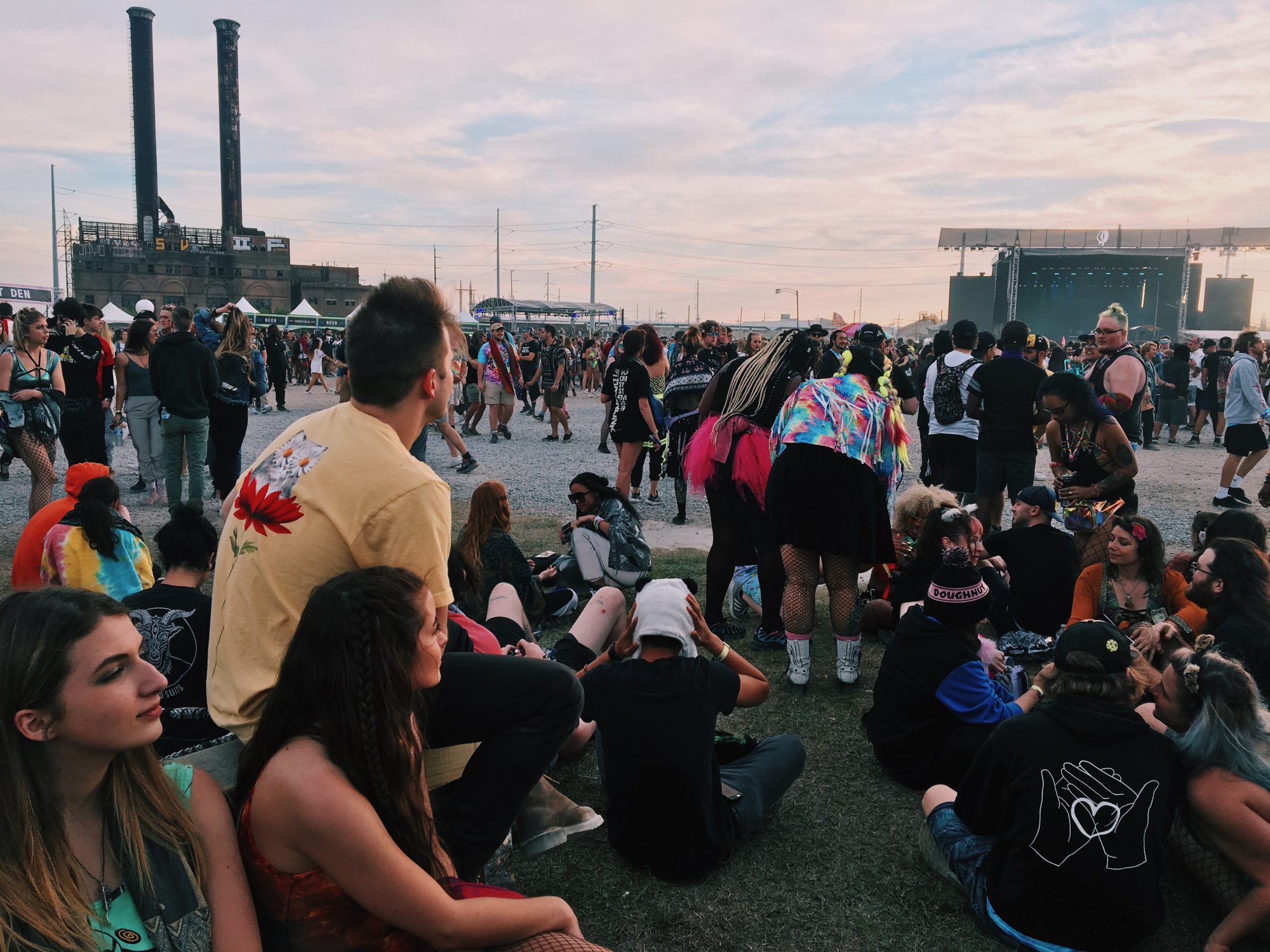 After Liquid’s set, my entire group was in a daze as we headed to GRiZ at the Power Plant.

We stayed in the back during GRiZ’s set and jammed to every saxophone-riddled tune, admiring the view and the crowd the entire time. Several girls were dancing in a circle and kicking their feet in the dust, and my friend and I jumped in and joined hands, laughing and twirling in circles. It was then that it really clicked just how beautiful and carefree this crowd was, and though it was evident we all came from all different walks of life, we all felt soulfully connected and happy to be sharing this experience with one another.

The rest of the night included snippets of Getter’s VISCERAL set, A$AP Rocky, and $UICIDEBOY$. I experienced G Jones’ set on my own, making it my first time seeing him since his tour a year ago. I’ve always had respect for G Jones as an artist and visionary, but seeing his work come to life was truly inspiring and is something I’ll never forget.

Our very last BUKU set was Mersiv, and though he performed at the extremely small Switchyard stage, his stage presence was huge and attracted a large crowd.

In between impeccable mixing and a capellas, Mersiv dropped Liquid Stranger’s and Dion Timmer’s “Spastic Elastic”, as well as Space Laces’ “Phone Tap” and Moody Good’s “SIXTYSIXTY”. The entire set was relentless from start to finish, and for that reason, was one of my top sets of the weekend.

Yet again, our night was not ready to come to a close, and we traversed the streets of New Orleans to Joy Theater for the WAKAAN afterparty.

The night began with G-REX, who slaughtered our eardrums with gruesome dubstep such as “State of Emergency”. Then, we got deep, dark, and dangerous with Shlump, who I’ve been wanting to catch for quite some time. He dropped one of my favorite songs by him, “Alien Technology”, and I couldn’t help but get low to the floor and wriggle my limbs to each extraterrestrial bass wobble. Up next was LSDREAM, whose infectious energy flooded the crowd with each trippy tune.

Finally, Liquid Stranger and LUZCID took the stage for their highly-anticipated b2b.

The entire Liquid Stranger and LUZCID b2b was filled to the brim with bass, including Dion Timmer’s “Dreaming Out Loud”, “Dragonhawks”, and Kai Wachi’s “Bodied” doubled with “Space Boss”. It was fun to see the two artists get hyped off of each other’s energy and bounce around on stage before slapping us with even more unexpected heat. We ended up leaving after Esseks came on but thankfully caught his “Professor Genius” opener before heading out and completing our BUKU journey.

Overall, BUKU 2019 inspired me to fall deeper in love with music, people, and living life to the fullest.

The past few months have been a really weird time for me as I’ve transitioned out of school and into the next stage of my life. Dealing with the lowest of lows hasn’t been easy, but visiting The BUKU Project gave me more strength and a positive outlook than I could’ve hoped for. Though it was only a two-day city festival, BUKU deeply connected me with myself and others, as well as the music that I’m so passionate about. If you’re looking for a festival that will change your life for the better, make your way out to BUKU 2020.

A huge thanks to The BUKU Project for having me, and I hope to see you again next year!