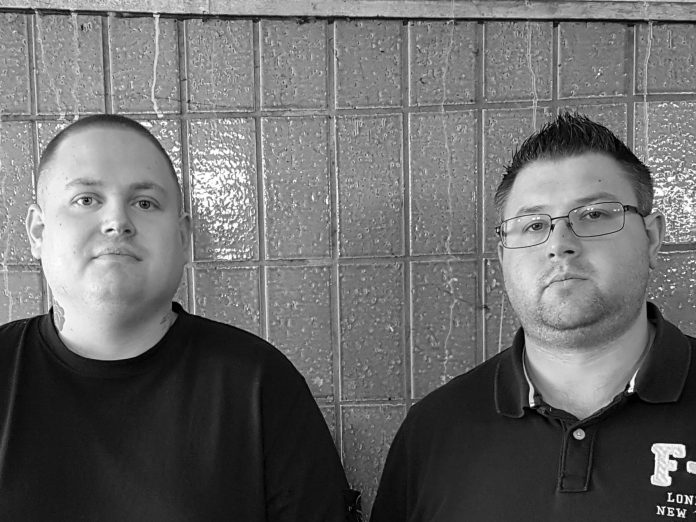 Prolific house music producers Ryuken talk about the state of Bass House, pirate radios, and the best food in London.

Cousins Aaron Doyle and Jeff Cox have been making dance music since the early days of UK garage. Between launching labels, releasing records, and playing clubs, they’ve kept themselves busy. It wasn’t until 2016, however, that they finally joined forces as Ryuken, a duo focused on making great house music in whatever its form.

Now, with the recent release of the Bass House hit “Pimp” and the proliferation of their “Big Pimpin” bootleg, Ryuken is poised to make a big splash in 2019. Read on to learn more about how their unique sound came to be and take a listen to their custom guest mix, with tracks from Kendoll and Wax Motif, below!

Your latest track, “Pimp,” is a modern Bass House jam. How did the song come together?

We wanted to make something a bit more stripped back and less musical, we started by making the beat and building the groove, then added the bass and some arps, then we just needed a vocal to tie it all together.

How do you think the Bass House scene has evolved from the 2015/2016 heyday? How have you evolved with it?

We have found that the scene has still got a good crowd and there is still a big demand for bass house, from going to clubs we’ve noticed the dirtier the bass the more the crowd responded. We think that the genre itself has become more raw and stripped back. This has rubbed off on our sound too, we like to keep evolving and trying new things and this keeps it exciting for us.

A lot of your music straddles the line between Deep House and Bass House, two genres that, on the surface, don’t share a lot of similarities. What draws you to make music on opposite sides of the genre spectrum?

We like all types of house music and we tend to draw influences from everywhere, but we like to have dark & light elements in the same track, we usually go for a musical breakdown and make the drop much darker and heavier as we feel that this can be quite unexpected and make the drop feel even more filthy.

You guys have been in the scene for a long time, starting all the way back in UK Garage scene of the 00’s. What is it about the dance music industry that keeps you coming back?

We are just a couple of bass heads really lol. We were lucky growing up in London as this gave us a lot of exposure to underground music via pirate radio stations, tape packs and independent record shops. We were fascinated with the sounds that were being used – we’d never heard them types of sounds being used in chart and mainstream tracks until the prodigy started to break into the charts, so they had a massive impact and influence on us.

How has that long history of music making influenced your current sound? Do you pay homage to your old sounds, jettison them entirely for new ones, or incorporate a little bit of both?

We try to incorporate our influences in to our tracks as much as possible, we feel it tells a story of who we are and gives us a unique identity.  When you listen to our tracks you’ll hear influences from house, acid house, rave, jungle, UKG, breaks, soul, hip hop, R’n’B, funk, disco and reggae.

With tracks “Master of Illusion” and “Love is a Miracle”, you’ve got an extensive history with vocal cuts. Do you build your songs with vocals in mind, or does the need for vocals grow organically from the beat?

It can happen in different ways really, sometimes we have a vocalist come in and we have a writing session with them, other times we get sent an acapella to work with and other times we start creating a track and find that it could use a vocal, then we like to find the right artist for the track.

We saw that you’ve got a new song coming out soon with Grime artist Laughta. What’s it like collaborating with artists outside of dance music?

It was really cool working with Laughta she’s an amazing artist, considering her background was from hip hop/rap/grime she really understood house and was really open to the vibe and the types of sounds we were using. We also feel working with an artist from a different genre can bring something fresh and unique to the table as they will bring their influences too.

You’ve started your 2019 off strong, with a number of singles coming out at a steady clip. What can we expect from you for the rest of the year?

We’ve got a few releases planned for this year, we have one coming very soon on Diplo’s Good Enuff/Mad Decent label with a fantastic artist called Maddy Carty, as you mentioned the one with Laughta coming out on Champion Records and a few more in the pipeline.

Finally, your Instagram is home to the occasional picture of yummy food. Any restaurant recommendations for fellow Londoners?

[Laughs] We do like our food! Some of our local favourites are Chicken Kitchen in Shepherd’s Bush, Five Guys, and Jerky’s in Fulham.

Connect with Ryuken on Social Media: