Once again the team at Dreamstate curated an amazing lineup for their San Francisco edition of the most prominent trance festival in the US. As highlighted multiple times before, the artists featured came with an array of uplifting, psy and tech trance sounds.

Dreamstate SF 2018 honestly had a lot to live up to. As I attended the first two Bay Area Dreamstate events, I expected nothing but top-notch quality and amazingly positive vibes. Though I don’t think it quite lived up to the inaugural edition, Dreamstate SF 2018 still managed to blow me away!

Still reeling from the amazing trance weekend that was Dreamstate SF 2018? Relieve the experience with these livesets!

The production value of the event was absolutely entrancing!

Every year the Bay Area event raises the bar! In the first year, Dreamstate SF featured a basic setup with beautiful lighting and a long podium with the Dreamstate logo. It was understated and got the job done without taking away from the music. In the second year, fans witnessed the spaceship-type motif. This year the main stage featured numerous panels which projected various scenes and a ridiculously large number of lasers.

Honestly, you would have to see it believe how intense the scene was at the main stage as it truly made me think of the production value found at Transmission events. It could be said that the production took away from the music as it was almost overwhelming at times. However, it was nice to see the Bay Area event step up to truly rival Dreamstate SoCal. Though it’s the smaller of the two California-based Dreamstate festivals, it showed that it’s not to be underestimated! 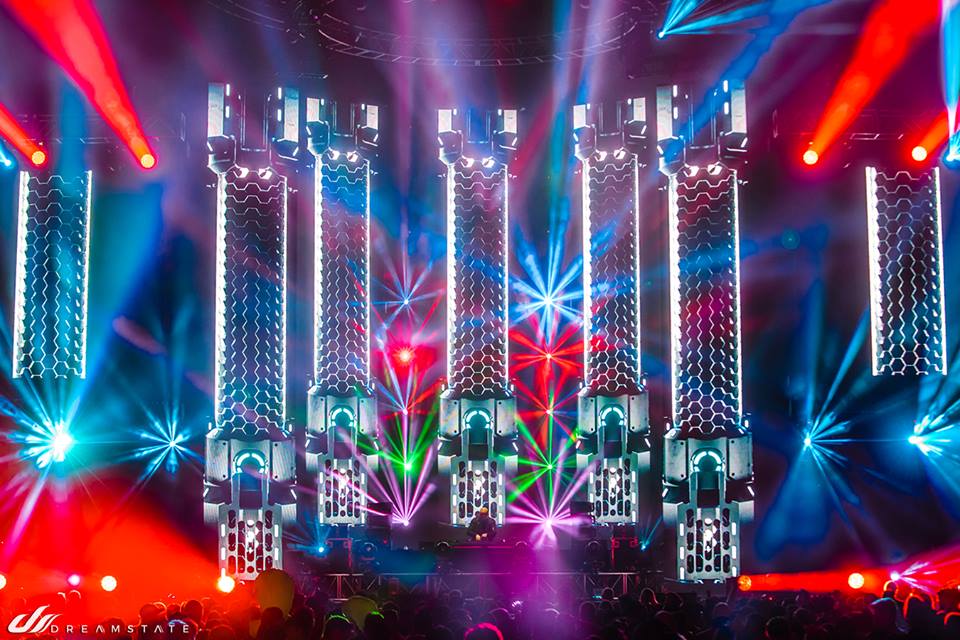 One of the biggest changes was the addition of the second stage.

Located in the Larkin room, the addition of the second stage allowed for more acts to be featured on the lineup. I have to admit, I was unsure how to feel when I heard that there would be a second room. I loved that in the past there were no set conflicts and trance fans shared the same sets yet drew different experiences and interpretations from them. Additionally, I loved that having one stage was reminiscent of the very first Dreamstate SoCal event, which I, unfortunately, could not attend. I did not expect to like the split as much as I did!

On Friday of Dreamstate SF, the Larkin room was dominated by the deep, dark sounds of psytrance. Though I personally do not listen to much psytrance I know fans of the genre greatly appreciated that they could spend the entire night entranced by the beats. I did catch a bit of Captain Hook and Coming Soon!!! and I have to say that the vibes were on point. The way the room was structured allowed for ample space to dance and the psy fans were not holding back with their moves!

Night two brought more of the uplifting feels. With the exception of one or two artists, you could find me in the Larkin room for the entire second night. I was caught in the feels when Monoverse took the deck and was absolutely enraptured when I heard Davey Asprey play for the first time. As he was one of my top five to watch, I was happy that he lived up to my high expectations.

The last three sets by Factor B, Robert Nickson, and the surprising back-to-back by the pair were the absolute best way to end the weekend. I was crushed when I heard that Allen Watts was unable to attend and play Dreamstate SF 2018 but this emotional back-to-back was the best choice to make up for that. Every single trance fanatic that ended with this set was vibing to the same beats and I definitely saw many tears flowing. 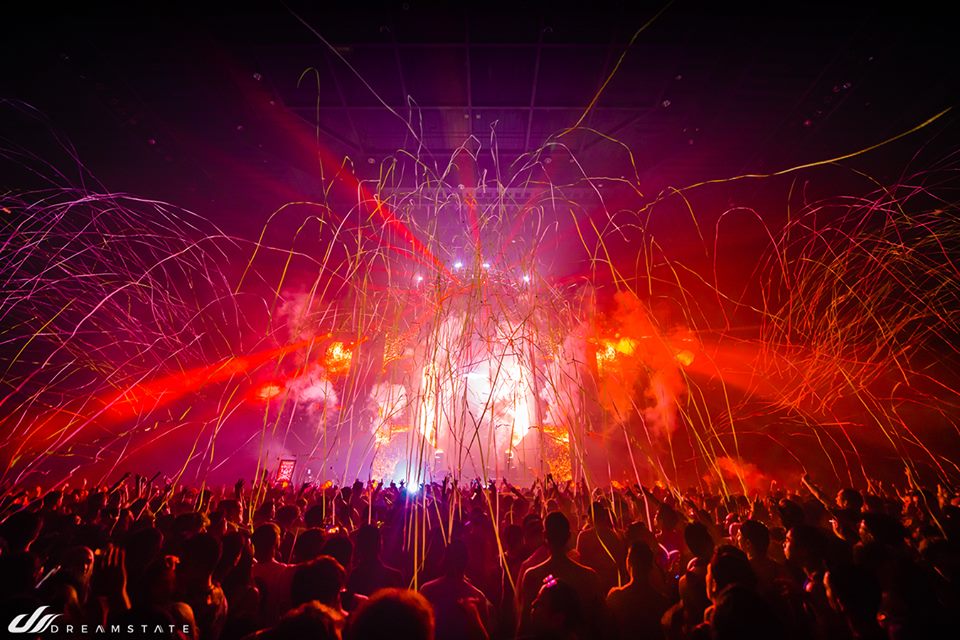 Whereas the Larking stage was bare bones with just a few screens, main stage was all about the high budget productions and big names.

As I said earlier, the number of lasers and the structure of the panels mirrored the production I typically see on the Transmission livestream. In addition to the high-quality stage production, this was the home of multiple big-name artists. However, aside from watching John O’Callaghan, Ferry Corsten, ATB, Giuseppe Ottaviani, and Heatbeat vs. Chris Schweizer, I spent little time at the main stage.

Speaking of mainstage, the act on that stage that blew me away was Heatbeat vs. Chris Schweizer. Like Davey Asprey, I listed them as one of my top five not to miss. I was really craving some harder styles and they brought delicious tech-trance to the main stage and quenched my thirst.

As one of the only tech-trance artists on the lineup, this epic back-to-back was a perfect way to explore their styles, though I do think it would be amazing to hear them both separately someday. Also, I would have loved if their set was later in the night. It felt premature to have the deep, hard-driving style featured before an onslaught of more uplifting and melodic sounds.

One thing that truly blew me away was the Bay Area’s adoration and respect for their local talent.

I loved that the lineup featured multiple Bay Area natives and transplants. If you expand that to encompass US-based artists, then that totaled at least four Bay Area artists and three from other parts of the United States. Though many of them opened, it was nice to see these artists also sprinkled in various parts of the lineup.

It was great to see that Dreamstate SF was all about supporting the rich and varied trance artists in the US, as I often wish to see more support from the massive SoCal event! The addition of so many local acts and the reverence they have for their local scene is one reason I loved this event! 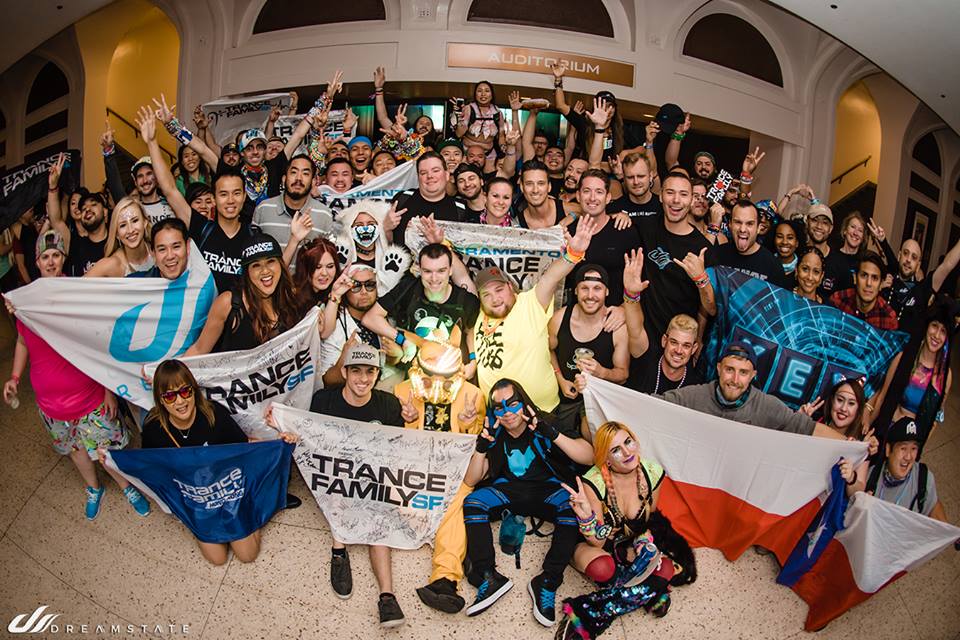 Dreamstate SF continues to hold a special place in my heart and the small changes made a huge difference in my overall satisfaction!

As I’ve mentioned numerous times before, Dreamstate SF 2016 was the first of the Dreamstate events I attended as I missed the inaugural Dreamstate SoCal. For that reason, it will always hold a special place in my heart. When I heard that the third iteration would have numerous changes, including the addition of a second stage, I was unsure of what to think. Thankfully, I went in with an open enough mind and came out loving it!

I’ll continue to recommend that trance fans attend the Bay Area event as the intimate feel that was present in the first edition lives on in Dreamstate SF and the positive trance vibes are constantly overflowing.