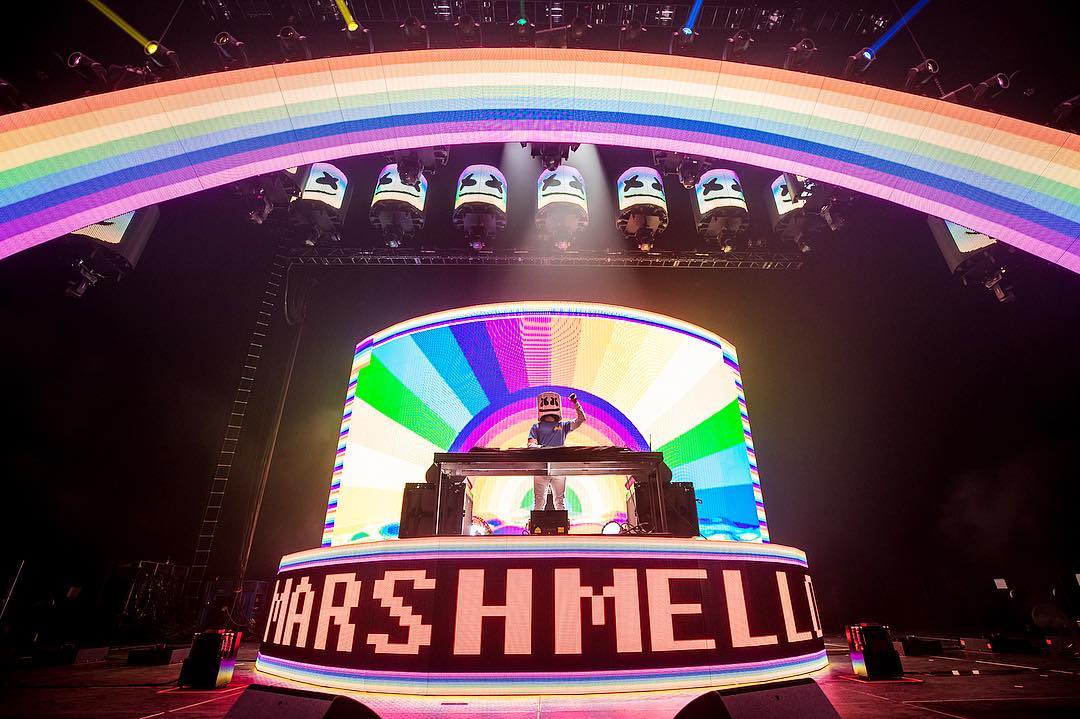 I got to the Los Angeles Convention Center about an hour after doors had opened. They had setup lines outside of the main entrance. The first checkpoint was for tickets and moved fairly quickly. As we crossed the first checkpoint there was an open space for you to wait for your friends and then the line for security.

If you decorate the line with balloons, you can expect people waiting in line to play with them

They had metal detectors and a pat down and the line seemed to be moving as slowly as it possibly could. The staff also checked our ID’s which seemed redundant because the official ID check for 21+ was still inside. The lines had bunches of multiple colored balloons on strings.

They were tied to the barriers between the lines and made for comical entertainment as the attendees pulled them down and shook them around. It reminded me of bunch of colorful grapes filled with helium.

Once we were past security, we entered into the foyer. A giant banner read, “Welcome to Melloville” and the columns down the centered were covered in more multi-colored balloons. They created the perfect photo opportunity as you walked in and many attendees were taking advantage.

As we approached the main room the ID check was to our left and the merchandise to the right. The ID check line was extraordinarily long and barely moving, so we opted to go to the second one inside.

I haven’t seen Adventure Club in a while, so hearing their new album and new sound was a great experience

As we walked past the crowd we noticed that Adventure Club was just getting started. Their set was different than I had heard before. It was less dubstep and heavy bass and a lot more future house and smooth synths.

Granted, this was the first time I’ve seen them since their latest album. Their visuals on the screens were spiraling colors and blended well with their set list. They played most of Red // Blue and it was a beautifully harmonic.

It’s disheartening to see such a nice venue have such bad organization, they couldn’t figure out the beer garden or the ID checks

We got to the ID check inside and would end up spending close to the entire set in lines. Security seemed to be questioning every person’s ID. As we walked away we headed to the beer garden whose line was being released in sections. By the time we actually got in to the nearly empty beer garden, Adventure Club was almost done.

Luckily the lines were short outside so we went to grab a drink, where we were again asked for ID! Needless to say we were annoyed that the staff made it this difficult to simply grab a drink.

As we walked back out toward the stage we got to the edge of the beer garden fence, it was separated from the rest of the dance floor. We had wasted so much time getting into the beer garden we couldn’t leave quite just yet. They had a white picket fence that we got right up against.

Sometimes when you overhear a bad idea, you just have to be the voice of reason

A few guys behind us vocally contemplated jumping the fence, to which we all very quickly told them it was not worth it. They would have had to jump two fences and there was too much empty space for them not to get caught doing it.

As much as it sucked, they needed to walk around. Luckily they took our advice and left the gate jumping for another day.

Everything was so bright and animated, it was fun to watch and even more fun to sing along with everything

The stage got dim and the background music quietly faded as we knew Marshmello was about to begin. He opened with Alone, the perfect song to get the crowd singing and then dropped into a bunch of other fan favorites. He played some Journey, his remix of “Better Off Alone” by Alice DeeJay, and even a remix of “Thief” by Ookay (one of his other openers). The visuals were colorful and cartoon-esque which made the set all the more fun.

From the front to the back, it was the first time I noticed LED shaped marshmallows hanging from the ceiling. They dropped up and down periodically throughout the show displaying the animated version of little Marshmello as well as just the Marshmello face.

Down the center of the room there was a cat walk that also shot sparks up as he grabbed the mic and pumped up the crowd. Lasers and lights shot out over the crowd and rotated in brilliant fashion. The lasers were rainbow colored and fit with the overall decor of of the convention center.

Smoke, lasers, lights, sparks, fire – the production literally had it all!

The production was impressive for the indoor space. By this time we had wandered out of the beer garden and made our way through the crowd, it was packed tight closer to the stage, but people were pretty good about moving out of the way as you passed through.

Halfway through his set he transitioned into some heavy dub, dropping “Scary Yikes Grrz” by FuntCase! The crowd went nuts at his switch up from melodic to headbanger. Finally, toward the end of his set he brought out Logic who live rapped and walked with him down the cat walk.

We watched as the final sparks shot up toward the ceiling and began our walk out of the convention center to beat the crowd. He closed with “Silence” as confetti seemed to explode from all corners of the room. The whole room joined in on the chorus and it seemed like every hand was in the air. It was the perfect grand finale for an epic show. If you have the chance to catch Marshmello at his next event, you most definitely should.