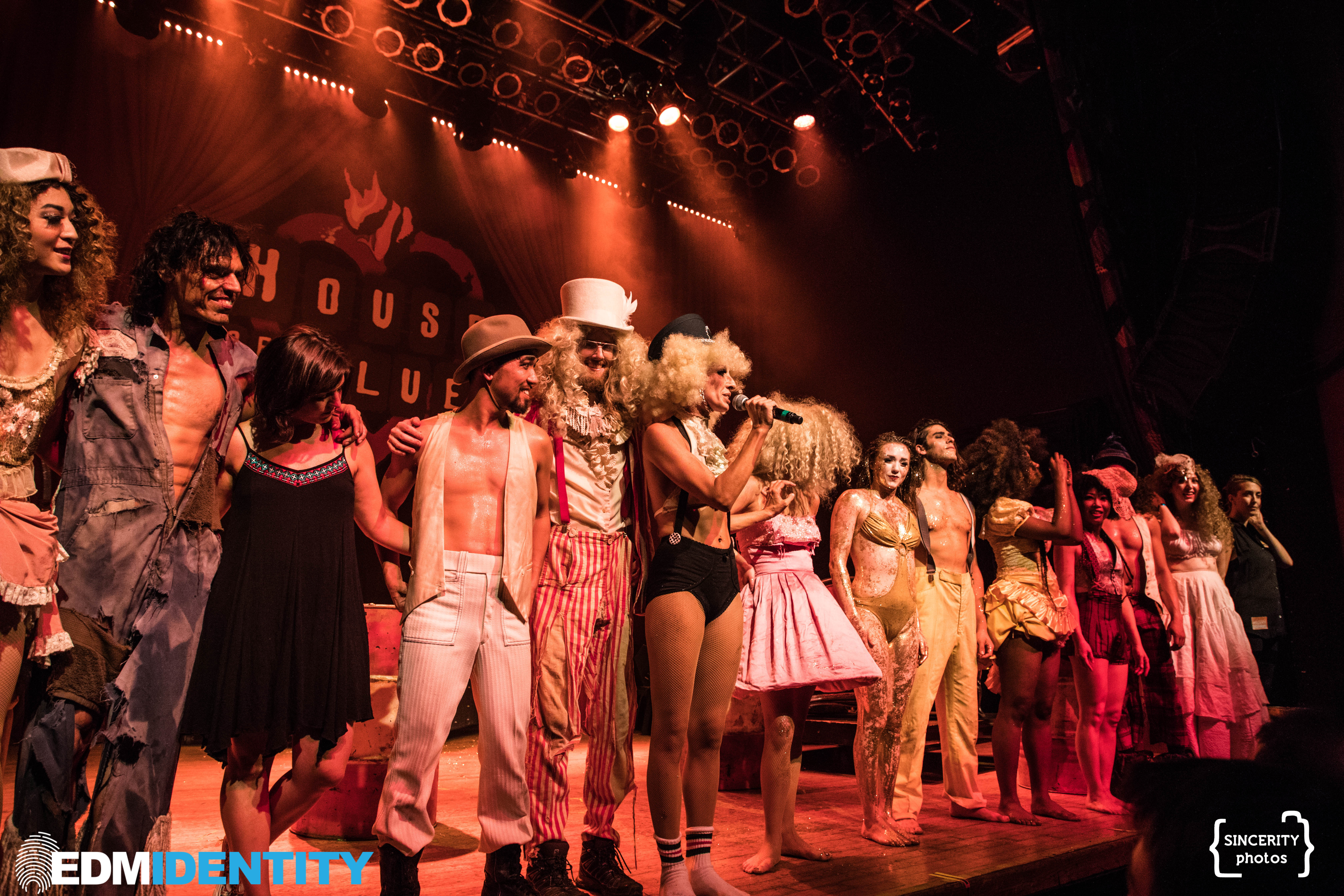 The Lucent Dossier Experience was a world renowned, innovative performance that I knew nothing about but completely surpassed expectations.

I had been to the House of Blues in San Diego a number of times for different concerts, but I had never seen the Lucent Dossier Experience before. As I walked down the stairs and into the main area of the floor, AHEE was mixing and had just started incorporating a live vocalist. His music was a mix across a lot of genres. From dubstep to heavy bass he covered the gamut. I moved closer to the stage as people kept leaving to get drinks to get a better view.

By the time Headphone Activist came on I was situated near the center of the guard rail. His set was very bassy, and he played songs I was not familiar with but I definitely found myself dancing along. Before long, the lights came up and the final preparations were being made to the stage for the Lucent Dossier Experience.

The opening moments of the performance were astonishing.

Electric candles were being turned on as some of the furniture on stage was being re-arranged. Promptly at 11:15 the house lights went down as the DJ took his place behind the laptop. The music started and the whole cast ran out. Their choreographed opening showcased their rhythm, timing, and acrobatics. Watching them jumping around each other to the beats of the music was awe inspiring.

We watched as they danced with each other and one of them performers began singing on the microphone. The room was filled with excitement and cheers erupted every time someone did a flip or dipped another cast member. As they danced, their facial expressions were pronounced and entertaining. The entire time they stayed true to their characters.

The first acrobatic feat came in the form of two girls aerial dancing within a spinning ring.

The girls gripped the steel ring on either side each using their respective straps to balance themselves. Two male performers slowly spun the ring as the girls maneuvered around each other. They bent backward and created shapes that highlighted their flexibility as the audience watched in silence admiring the beauty of it. Eventually, the two guys spinning the ring would join in the act by gripping the outside of the ring and spinning themselves into it, then floating side by side with the girls.

The next scene was surprising as they wheeled out a clear water barrel with a girl sitting inside it.

There was a tube leading out of the barrel that she was using to breathe. The music started and she began to rise. As she pulled herself out it became clear that she was a contortionist of sorts. A male performer joined her and aided in helping her out of the water. She bent completely backward having her feet touch her head as the other performer supported her on his chest. Cheers and hoots came from the audience as she stunned us with her performance.

As the scene ended there was now water all over the stage. One of the stage assistants came out dressed in blue denim, covered in mop-like fringe. He got on the floor and started mopping up the water with his body. Laughter could be heard as we watched him shimmy and shake against the ground trying to dry it up.

The next part of the performance involved one of the performers singing live while another performer, dressed in a long flowing gown danced on top of a platform. Powerful fans blew the ribbons of the gown high into the air as she seemingly danced in an almost interpretive way. It was beautiful and it felt like you were watching a story unfold before your very eyes.

In a few scenes, we would see another interpretation as a performer would walk out with long strings attached to her outfit. She would try to run but the actor holding the strings made it clear that she was her puppet. The dance was true to the feelings of being pulled in multiple directions, not having a say in where you go. It was profound and the audience was completely silent for it.

The last few scenes were well choreographed and involved a variety of props.

There was even a moment when they were trying to move the couch that it got pulled off the platform on which it rested. The leg snapped and the front bottom of the couch completely fell apart. You could tell that it wasn’t a part of the show, but everyone on stage just went with it. They stayed in character as they repositioned the furniture and you could tell they were watching much more intently as the contortionist returned to perform on said couch.

As they began to close out the show it was time for the finale.

The troupe director came out and you could tell she was classically trained in ballet. She wore the signature ballet slippers and stood on the tips in the center of the stage. The whole cast came out as they wrapped up the night. They ended exactly on time and the director had a few words of gratitude to express not just for the performers but to the audience as well as having the stage assistants come out and give a bow as well. One more thank you and then Thriftworks would begin playing as the last set of the night.

When I was first asked to attend the Lucent Dossier Experience, I didn’t know what to expect.

I scoured YouTube and their official website to get a good idea of what I was in for. Once I had done all that research I had this vague idea that it would involve acrobatics and aerial dancing. While the show did have those components it went far beyond that with the incorporation of live mixing, live vocals, and contortionists. It was like watching short stories unfold artistically.

The performance got people to laugh, to cheer, and to watch in silent awe, admiring an art form that I don’t think we see very often anymore. This was much more than just a dancing performance, this was a unique experience that I would highly recommend and would definitely see again.

Be sure to check out the rest of our photos on Facebook!