Ben Nicky is back and ready to throw down at Avalon Hollywood!

On Saturday, August 19, Ben Nicky returns to Avalon Hollywood! It is sure to be a solid one, as Ben will be spinning a special four-hour set to keep the floor moving all night, with Kane Michael playing in support as well. Don’t miss out on your chance to catch these two artists, and check below for your chance to win tickets!

Hailing from Bristol, UK, Ben Nicky, first entered the scene as a label manager and promoter. Now, Ben Nicky is one of the most sought after trance artists out there. His tracks are consistently featured on A State of Trance and Nicky himself has received support from Armin Van Buuren, Paul Oakenfold, Tiesto, John O Callaghan, and Ferry Corsten, to name a few. Ben Nicky is also very well-known for playing mash-ups of popular and illustrious trance tracks, as well as often dropping Porter Robinson remixes and Above and Beyond in most of his sets.

In 2013 Ben Nicky launched his Headf**k brand, taking mash-ups and adding his own flavor of effects, samples, and sounds. With this brand also came a line of merchandise, which features signature tops and tanks that fans can be found wearing at many of his events. Ben Nicky has played at some of the world’s biggest nightclubs and most popular festivals and has branded himself as an amazing producer and DJ. He has created chart topping singles such as ‘Anywhere,’ “The Switch” “Chapel Street” and ‘Hectic’ . Most recently, he dropped a 150 pyc remix of Jauz’s track, “Feel the Volume” which certainly displays his musical range. Ben Nicky’s tracks have been released via major labels such as Armada and VANDIT Records and more with chart topping genre crossing remixes. 2017 has been a great year for him as he’s played a variety of festivals and clubs, from Tomorrowland to A State of Trance, Ministry of Sound London and multiple places in between.

Ben Nicky has true musical range. His tracks can be found a diverse range of styles which lends to his popularity. His styles are typically within the trance genre, but his “Headf**k Xtreme” and “Techf**k” sets also include sounds as varied as techno and harder dance styles.

If you’ve been to Dreamstate events, you’re well familiar with  his name and know that his sets are often at max capacity with fans donning his brand and dancing to his infectious beats. Ben Nicky is a true entrepreneur in the dance music scene and is one of the most unique and versatile DJs in the business. If you’re in the LA are on August 19th, definitely check out his set at Avalon Hollywood. It’s one you won’t want to miss!

Kane Michael was just in Los Angeles last month and played an amazing set during Simon Patterson’s Open Up event! He came into the music world as a punk rocker, but over time turned his focus to a plethora of electronic music genres. You can find him spinning anything from techno, trance, progressive, and drum & bass to create his signature sounds. In addition to music, Kane is a contributing author at Magnetic Magazine and puts together interesting and thought-provoking podcasts called “The Lights/Out Selection” & “In Conversation”. With his genre-breaking sound and multifaceted interests, he is definitely one to watch! 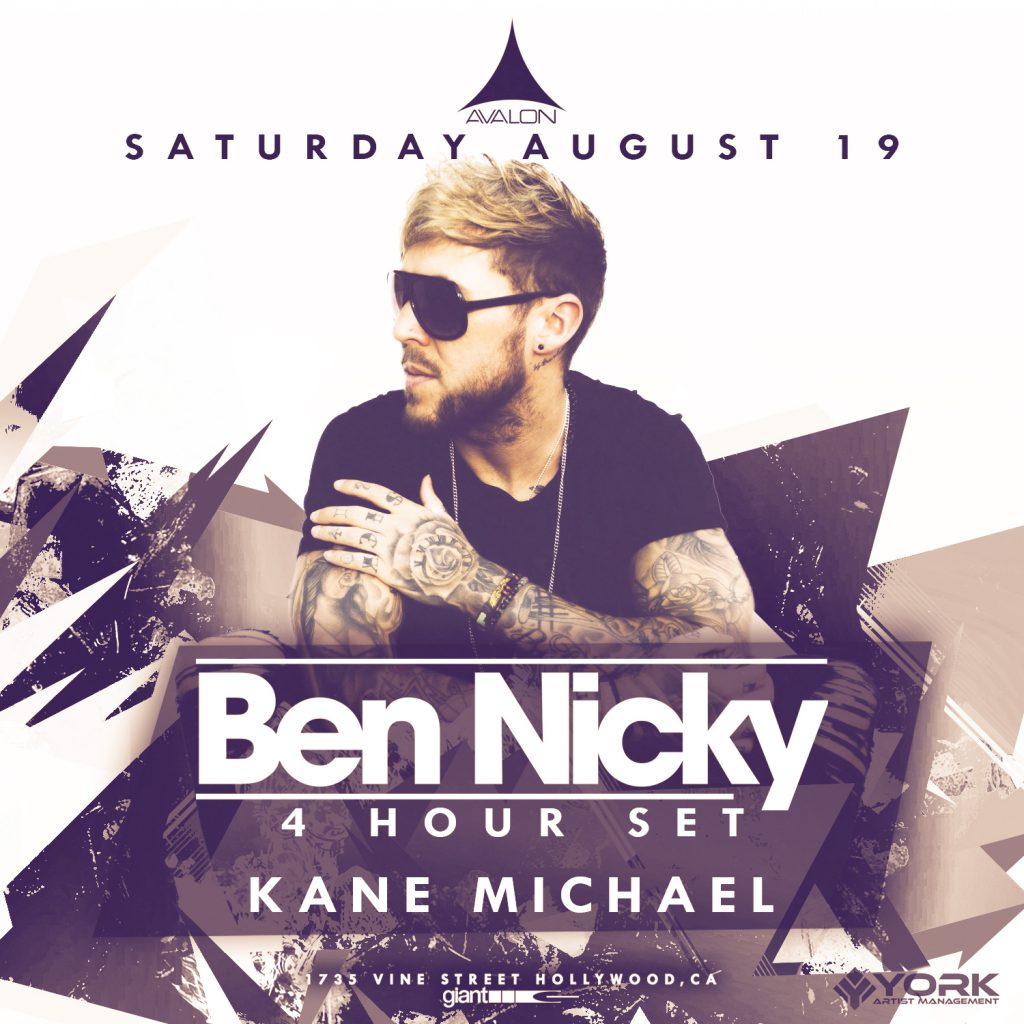