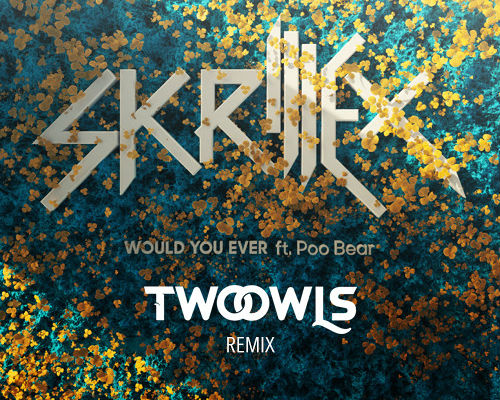 TWO OWLS show their diverse production capabilities as they take a stab at Skrillex’s new hit, “Would Ü Ever”.

TWO OWLS is a house duo that has been tearing it up lately, and they have now tried their hand at remixing Skrillex’s “Would Ü Ever”. Their remix resulted in a very impressive take that actually goes above what you would expect from these guys. The track is sped up from the original but still incredibly melodic. It builds up into an absolutely killer drop that takes its influence from the future bass genre. This song really hits you right in the feels from start to finish. My only regret is that I wish it was longer!

Skrillex can do no wrong as an artist. A few years back he was at the top of the dubstep game in America and was a pivotal part in dance music making its transition in the States. Since then he has moved away from dubstep and transitioned to managing his own record label, touring all over the world as Jack Ü, and really just doing whatever he pleases. Further, he has infected radio waves with his production on hits like ‘Where Are U Now’ with Justin Bieber and ‘Purple Lamborghini’ with Rick Ross. The man knows how to make catchy production and is very good at what he does.

Thus, it is no surprise his newest hit “Would Ü Ever” has already begun its climb on the charts. However, as such a popular song, there are very few remixes out by other producers. The reason behind this? It’s really hard to rework a track that already sounds so good to begin with.

Did TWO OWLS impress with their remix of this massive Skrillex tune? You be the judge – check it out below!

Stream Skrillex – “Would Ü Ever” (TWO OWLS Remix) via SoundCloud:

TWO OWLS have been around for a year and two and have had some very noticeable releases on Buygore, DIM MAK, and several other reputable labels, but they recently decided a change was necessary for their careers to flourish in the way that they envisioned. They released a few tunes under the name NIGHTOWLS, but the bigger they got, the more people began confusing them with Insomniac’s NightOwl radio. Thus, they underwent a heavy rebranding and emerged as TWO OWLS. The result was not only a brand new name, but a brand new logo, and a new sense of identity for these two young producers.