The EDC Week Charity Auction just released more items to get you up close and personal with your favorite artists!

Insomniac Events has partnered with eBay for Charity to bring headliners the EDC Week Charity Auction this year. Entering its third year, the highlighted beneficiary is the Boys & Girls Clubs of Southern Nevada. After a successful round of bidding for items not artist related, now the focus is on the DJs who will be spinning throughout the weekend! Insomniac Events has partnered with many of the artists who will be playing this year at the Las Vegas Motor Speedway to bring some insane experiences for some lucky fans. Notable auction items include a Helicopter Entry to EDC Las Vegas with Above & Beyond, a chance to hang out with Hardwell at Hakkasan, Race with Excision on the fastest racetrack in Las Vegas, and more! Look below for the complete list, and start bidding today!

“In my neighborhood growing up, the local community center always provided a place for myself and other kids to feel safe and connected to one another and the community. It feels great to give back to an organization that has brought wonderful programs and happiness to thousands of deserving children,” said Pasquale Rotella, Founder and CEO of Insomniac. “With the support of our incredible Headliners, this year’s EDC Week Charity Auction will fund a brand new art program for all 14 Boys & Girls Club locations in Southern Nevada.”

All auction items are available HERE, where 100 percent of the funds raised will go to the Boys & Girls Clubs of Southern Nevada. Check the full listing of items below, you have until May 11 to bid! 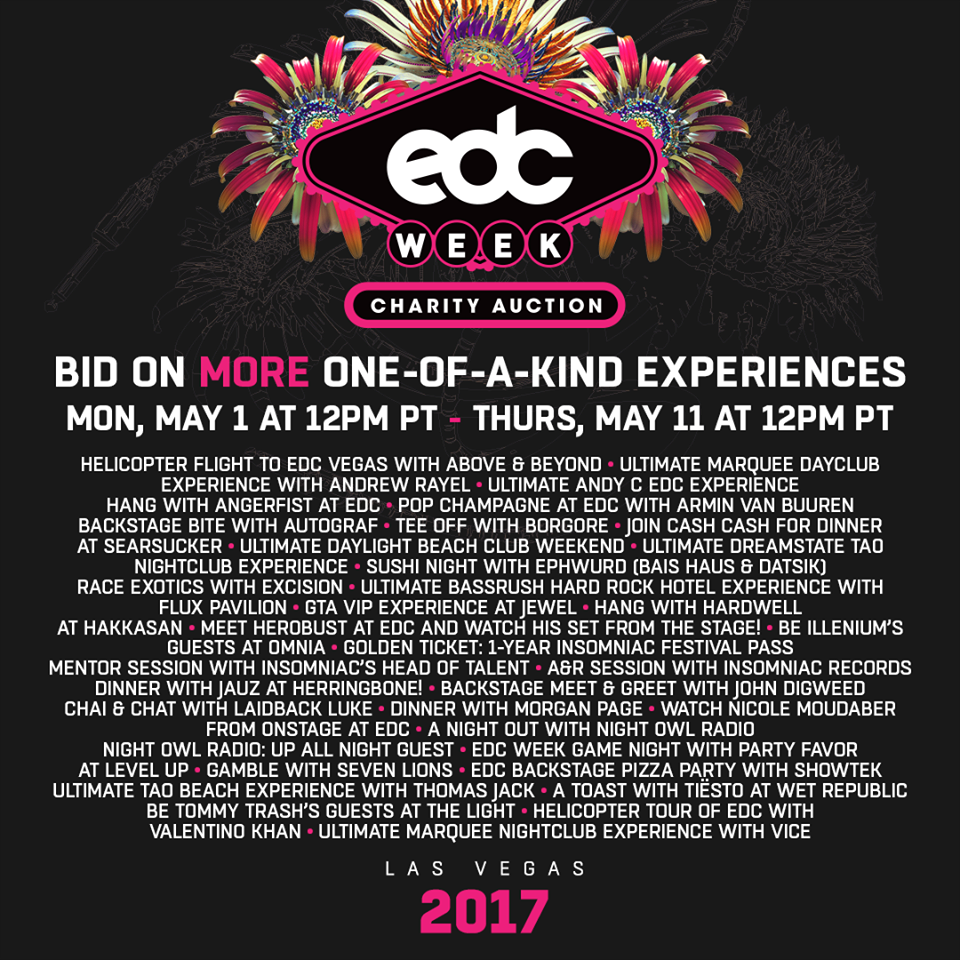 A complete list of packages, including ones with Flux Pavilion, Seven Lions, and more can be found HERE!

The Boys & Girls Clubs of Southern Nevada is a nonprofit organization that operates 14 facilities in Southern Nevada, and serves more than 20,000 youth in Las Vegas, North Las Vegas, Henderson, Southern Highlands and Summerlin.  These Clubhouses offer children ages K-12th grade a variety of daily creative, fun and educational programs.  Boys & Girls Clubs of Southern Nevada mission is to enable all young people, especially those who need us most, to reach their full potential as productive, caring, responsible citizens.  Keep up with BGC events and news on Facebook, Twitter and Instagram. For more information visit www.bgcsnv.org or call 702-367-2582.