On Saturday, April 22, Avalon Hollywood is bringing the psytrance beats with Berg and Trance Psyberia!

Israel-based trance artist Shlomi Berg, known in the music world as Berg, has been in the music scene for years. Though he first began producing music at 15 years old but began making waves in 2002. It was in that year that he dropped his first EP, Wizard which cemented hi progressive and psytrance sound. Since then he has played festivals all over the world from Mexico to Israel. Berg played at Dreamstate SoCal this past year and received an overabundance of positive responses. He also recently released his latest album Aurora and is certainly an artist who will appear to any psytrance lover’s senses. Check out the 500k Mix below for a look at his sound and what he’ll be bringing to his set at Avalon Hollywood!

Support for the evening will be provided by Trance Psyberia. The origin of the group is a bit of a mystery. However, their socials state that “The main purpose of Trance Psyberia is to show people how different psytrance can be.” Get to know their sound by checking out the video below!

Love trance and want to attend? Enter to win tickets to Berg and Trance Psyberia at Avalon Hollywood!

Win a Pair of Tickets to Berg & Trance Psyberia

Connect with Berg on Social Media: 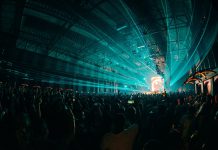