For the third year in a row, Audiotistic will bring us the most banging trap and bass beats to the cosmicMEADOW stage at EDC Las Vegas 2017!

The cosmicMEADOW stage has consistently been my favorite stage at EDC Las Vegas, bringing in some of the biggest names in trap, hip-hop, and electronic music. Once again, Audiotistic will be hosting the stage, and if past years are any sign, they are about to put together jaw-dropping stage production and an unreal lineup. They consistently bring the best artists in bass and trap house, whether they be on the rise or already widely recognized talents. I can’t wait to see what’s in store for 2017! The sweeping cosmicMEADOW stage is the first thing headliners see when entering through the grandstands, and it puts out the first booming beats they hear as they dance their way into the festival. This year it will once again be a sight to see, with over 600 LED panels and almost 500 light fixtures throughout the stage. One the best parts of the cosmicMEADOW stage is the huge grassy area surrounding it. It allows attendees to either get up and dance or take some time to sit down and chill while watching a set. It’s surrounded by art installations, food stands, art cars, and neon paths leading to the seven other stages. Everywhere you look there’s something new and exciting! In past years, I’ve seen artists such as Flume, Bassnectar, Alison Wonderland, Marshmello, Slander, and Flosstradamus absolutely kill it at the cosmicMEADOW stage. The energy is overwhelming!

Watch the trailer for Audiotistic presents cosmicMEADOW Stage at EDC Las Vegas 2017 below:

EDC Las Vegas returns to the desert once again for three days on Friday June 16th until Sunday June 18th. From dusk until dawn, some of the most legendary names in dance music will be playing in this land of roaming Art Cars, exciting carnival rides, and a positive community filled with love and unity. Will you be there? Tickets are still available to purchase, HERE!

Aside from hosting the cosmicMEADOW stage at EDC Las Vegas, Audiotistic has also put on hugely successful events in the Southern California area, featuring artists such as A-Trak, Diplo, Datsik, Kid Cudi. Their forward-thinking styles of music unite electronic, drum and bass, hip-hop, turntablism, and more. 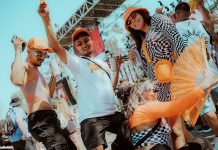