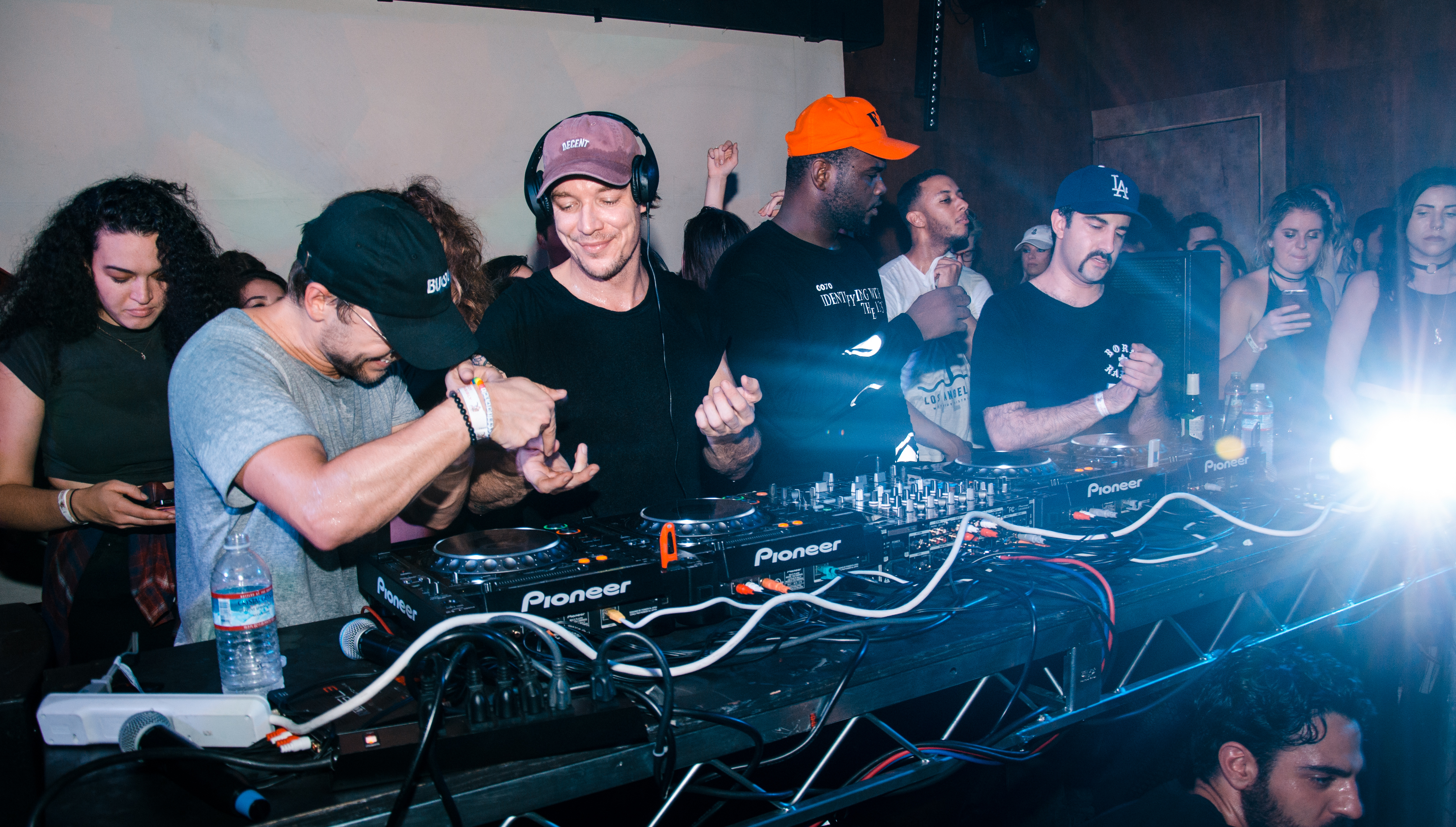 LA Gives Back was the perfect event for those looking to spread some holiday cheer and raise funds for the homeless in Los Angeles.

As I circled the neighborhood looking for parking, little water droplets began to bead up on my windshield, and I could tell it was definitely going to rain. I circled the area a few times before settling in on a spot a few blocks away. My friend Cameron had just arrived as well and was en route to my position as I gathered my things and donned a hoodie in a desperate effort to remain dry. We walked the few blocks to Union Nightclub and saw two lines forming in front. By now the spackling of water had become a steady stream and my hoodie was taking the brunt of it. I didn’t feel wet, but my hoodie was definitely getting heavier. It wasn’t too long before our IDs were checked and we walking into the first holding area of the club. Tickets were getting scanned, guest lists were being checked and then everyone was free to walk into the outdoor courtyard, also known as the smoking patio. The floor was covered in water, so we gingerly stepped into what looked to be the shallowest parts and made our way to the stairwell.

Union Night Club was huge and featured six full rooms of amazing music. I could tell this was already shaping up to be an amazing night.

Free Grilled Cheese was being taken literally during the evening.

Up the stairs we ventured, noticing an Artist Lounge about midway up our path. At the top of the stairwell was the entrance for what we would consider the main stage for the evening. It featured the largest dance floor and stage compared to the other rooms and BROWNIES & LEMONADE x HAM ON EVERYTHING was flashing on the screen. We knew we would be back multiple times but it was time to wander and explore the venue first. One of the back rooms was long with a large island bar in the center of the room; we noticed the Free Grilled Cheese signs behind the DJ booth and on the doorway. As we walked toward the back there was a chalkboard listing out ingredients and a table featuring none other than free grilled cheese sandwiches. Next to the sandwich area were two large screen TVs with video game systems attached. We were in awe.

Each sponsor or crew was well represented in their respective spaces inside the venue.

The next room had the merchandise table along with a self-run photo booth. Tucked away in the corner was another DJ booth with Late Night Laggers posters lining the walls. Being able to count 3 booths on the main floor without much noise interference was pretty awesome in and of itself but we had to know what else there was. We walked down the stairwell that featured its own disco ball and came upon the first downstairs room. All of the rooms and booths had simple setups. There was no huge divider or security between artists and audience. You could crowd up on the booth close enough to not only touch the decks but the artists as well.

By now we realized that there were no lineups to look at and so far we hadn’t seen anyone playing that we recognized, however, it was still very early in the night. We walked around to the other side of the basement, taking note of the Space Yacht posters. This DJ booth was lifted and we could tell the room was dedicated to house music. As we delved deeper into the corner we found a sunken room where the final room of music was. The signs and music playing immediately told us we had stepped into the Emo Nites sponsored area. There were suds everywhere!

Finding out who was playing and artists we would see walking around was a fun surprise!

We would just rotate between rooms, periodically watching twitter and slowly piecing together when each artist was going to play. As we walked back into the main room in the basement, Ephwurd had just jumped on stage. They were actually just hanging out in the Artist Lounge that was lofted in the same room. Right as they began to throw down, we walked up into the loft where we found Valentino Khan and Boombox Cartel chilling with a bird’s eye view of the crowd! They would both make appearances periodically throughout the night both on stage and just hanging around the venue too.

My friend and I danced the night away to some great b2b sets too.

We walked upstairs to watch Kittens in the main room, and from the side of the stage we watched as Mr. Carmack did live vocal support on the mic as Kittens threw down. It wasn’t long before we noticed Ekali standing next to us, talk about getting up close and personal with the acts. He was next up and as he got on stage we just followed because we knew his set would be epic. I’ve seen him perform at Tramps Like Us and caught his set at Bang Bang in San Diego so I was excited to see him perform once again, this time only a few feet in front of us. He was full of energy, jumping around the stage genuinely playing the crowd, the stage and the room was beginning to swell with body heat. Ekali literally jumped into the crowd off the front of the stage and helped back up by security. The whole night felt unreal at this point.

Ekali finished his set, and we walked back down to get air from the smoking patio where we would run into him too! After catching our breaths, we walked back to the basement where we found Party Favor b2b Valentino Khan. The room was crowded as everyone was getting as close as they good. All the trap and bass you could imagine were being thrown down and everyone was loving it. Suddenly the room started to get a little thinner which we knew was the signal that Diplo was about to start in the main room.

LA Gives Back was definitely an unreal experience, one that I hope to experience again in the future.

The air was now a thick mess of humidity and warmth. There were security guards keeping people out of the main room once we got up the stairs but we just had to walk through to the other room to get around them. We carefully pushed our way back to the side of the stage. The rage fest continued as Diplo threw down with Swizzymack. Then as if this night couldn’t become more unreal, Party Favor and Valentino Khan walked up onto the stage for the ultimate b2b – a true Diplo and Friends set! The energy in the room was explosive, sweat was dripping off of everyone. As Diplo played the last couple of songs, the stage erupted into a fairly controlled chaos. The front row was now on stage and security was quickly forming a barrier between them and the decks. The DJs thanked the crowd and quickly exited out the side door. We were being escorted back toward the basement and out the door.

This Christmas present came early for me, and I was amped about the entire experience.

We were all on fire from the night. There are few times that the lines between artists and audience members are so entwined, and the venue was the perfect setup for it. The cool night air was refreshing as we walked down the sidewalk and even noticed Party Favor walking back to his car across the street. Sometimes we forget that these artists are just like us, and nights like this really blurred the line between artist and attendee. The whole night was exhilarating and even more so because we knew all the proceeds were going to help the homeless. For as large as LA is, it’s good to know that there are so many artists willing to help give back this time of year.

This is an initiative from the Monday Night Mission, an organization operating on Skid Row´s streets feeding the homeless from Monday through Friday, all 52 weeks of the year. In a partnership between Monday Night Mission and the San Fernando Valley Rescue Mission, our goal is to operate a mobile shower throughout Los Angeles. We will be collaborating with homeless outreach teams within the city and county of Los Angeles, the Veterans Affairs Administration, and other non-profits who offer homeless case management. This will not only offer the dignity of a shower, but also give direct referrals to housing, mental healthcare and veterans benefits as a means to a path out of homelessness. Join us and be part of an initiative that will build the capacity to better serve our community in a homeless condition.

Get more info on You Caring HERE!

In collaboration with the leading social services providers and educational institutions in the region as well as over 400 volunteers, we offer a free and comprehensive continuum of care that combines emergency necessities with therapeutic, health, employment and education assistance, and creative arts services which all assist and inspire homeless youth to build self-sufficient lives.

Get more info on My Friend’s Place HERE!

The Casa Libre/Freedom Home is a project of the Center for Human Rights and Constitutional Law, Inc. It is a licensed emergency and long-term 14-bed shelter for minors under the age of 18 without homes, including unaccompanied immigrant and refugee children.

Connect with the Organizers via Social Media: