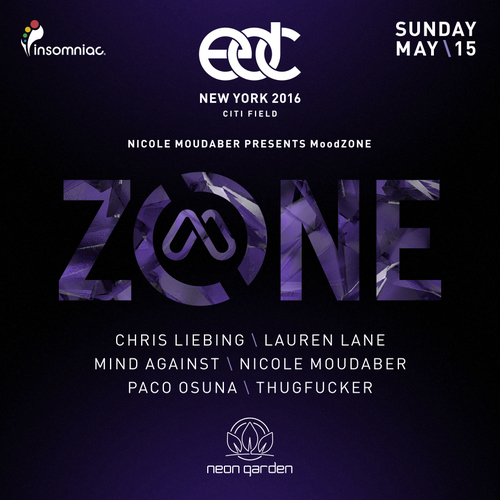 Nicole Moudaber will keep you dancing all night at EDC New York 2016 at the MoodZONE Stage!

As if the amazing lineup with dance music across the spectrum, spectacular food options, and VIP perks weren’t awesome enough, it’s just been announced that techno legend Nicole Moudaber will be hosting her very own stage dubbed MoodZONE at EDC New York on the second day of the event, Sunday, May 15th. Splitting her time as an event promoter, record label owner, radio host and a world-renowned DJ, Moudaber knows exactly what to bring for techno fans to enjoy EDC NY.

Moudaber hosts a weekly radio show titled “InTheMOOD” and the latest episode, a B2B set with Dubfire in Palm Springs gave a teaser of what’s to come for MoodZONE at EDC New York. Thugfucker, German techno pioneer Chris Liebing, Spanish artist Paco Osuna and many other artists will be joining her at the MoodZONE stage this year, bringing something a little different, yet something that is sure to be enjoyed by techno and all EDM fans alike.

In addition to all the fantastic artists on other stages, will you be checking out MoodZONE for some classic techno at EDC NY? Check out my top five acts that aren’t to be missed at EDC NY!