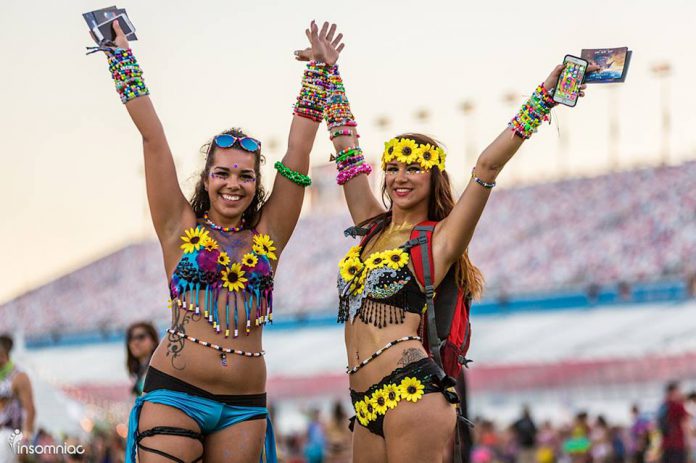 In celebration of #EDC20, let’s take a look at the evolution of EDC fashion over the years starting from its humble beginnings in 1997 to the present.

Why fit in when you were born to stand out. – Dr. Seuss

During these years, the majority of attendees rocked wide leg pants, also known as UFO/Phat pants, paired with other bright apparel. If you’re not familiar with UFO/Phat pants they come in a variety of colors and have a plethora of pockets, imagine super flared pants that you could fit 5 of your legs in. Accessory wise, many wore plush character backpacks and kandi was prevalent. Ball-pit balls, pacifiers, spiked hair, and visors were also items you could find ravers sporting during the earlier years. Essentially they wore articles of clothing that were both comfortable and unique, but since there wasn’t a ton of options people ended up just wearing what they could piece together.

As the Electric Daisy Carnival progressed, fashion also followed suit. UFO/Phat pants became a thing of the past and outfits became more heavily decorated. Gone were the days of people wearing heavy amounts of clothing, that’s for sure. When EDC moved to Las Vegas in 2011, clothing for both men and women began to disappear to cope with the heat of Sin City. Girls began to look at go-go dancers for costume ideas, leading to a plethora of fluffies, boots, and side-ties. Bras and corsets that are decked out in fake daises and rhinestones are fairly common outfits for girls as well. Costumes in general began to rise up in popularity, and you can find more people who are comfortable dressing up as their favorite super hero or villain now more than ever. As a girl preparing for EDC, expect to either pay a small fortune ordering an outfit or to burn yourself multiple times trying to glue gun rhinestones onto your bra. In addition to decorated bras, many choose to wear pasties, revealing cut out bottoms, and crop tops. Although fashion has changed dramatically since the beginning of the festival, one thing that has remained consistent through the years is kandi.

What are your favorite pieces of fashion? What outfit are you wearing to EDC Las Vegas 2016? Let us know in the comments! 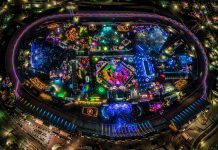