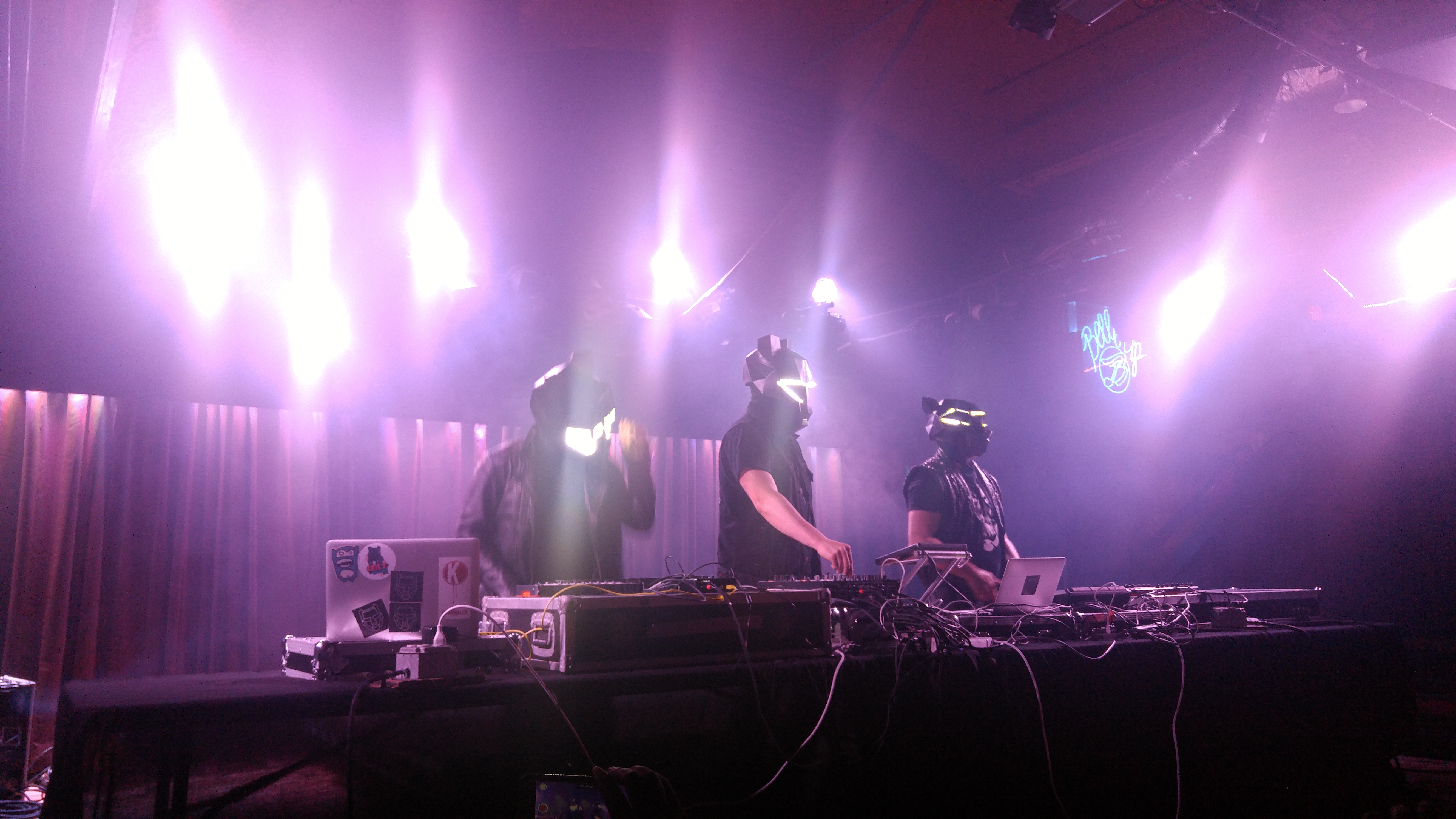 I had never been to Solana Beach or Belly up. When we arrived and parked at the venue the street was mostly empty and everything else seemed to be closed, then again it was a Wednesday night. When walking up to the entrance it looked like an old school movie theater. Black letters against a lighted backdrop listed upcoming events above our heads. The door man opened the door and we were immediately greeted by neon letters announcing we were in the right place for Black Tiger Sex Machine. As we walked down the hallway we noticed that the place was mostly made of wood with a wood bar top and wooden benches surrounding a wood dance floor. Above the bar hung a giant shark with red glowing eyes. It was equally intimidating as it was fascinating to look at. We had arrived in plenty of time to see the the first opener – Dabin. The dance floor was mostly empty which let us get pretty up close and personal with him. His set was so much better than his SoundCloud could give you a preview of. Smooth transitions from remixed pop songs to trap style to bass and drums were riveting – so much so that we tweeted to him that he should have been recording the set (he replied later saying he wished he had). As his set was coming to an end the bar was beginning to become more filled. People entering immediately got a drink and began filling in the spaces on the dance floor. Dabin walked off stage and out the back to get some air. Apashe who had been discretely setting up his equipment toward the end of Dabin’s set, grabbed the microphone to pump up the crowd. His set brought all the bass and beat. From the very front row we could feel the air from the subwoofers as he really got the party started. By now the dance floor was full and Apashe was really starting to get people moving. During the set we noticed that Dabin was actually standing right behind us, what better time than right then to grab a quick picture with him and tell him how much we enjoyed his set. He was very laid back and thanked us for coming. For the rest of Apashe’s set Dabin was front row raging with the rest of us. As Apashe closed the set, the lights got dim and he told us to get ready to go to church! All was dark, like the quiet before a storm. The dim lights had now faded to black and even from the front row you had to squint toward the side curtain to see if they were coming out. A low bass hum began, the excitement was building and suddenly as if they had appeared out of nowhere we saw them: Black Tiger Sex Machine (BTSM). Wearing their iconic black, geometric, tiger helmets, the trio were also sporting leather jackets/vests, dark shirts, and jeans. The opening introduction (The Virus) was overarching and felt very cathedral-esque as the underlying bass slowly filled the room and seemed to expand upward and then slowly faded into the darkness. Lights flashed from their helmets and the stage light show began as they moved into the bulk of their set. The rhythmic beats and synth sounds felt like they involuntarily moved your body. All around us the crowd was bouncing back and forth in time. A guy standing against the stage floor turned around and whips out two fans, one he starts fanning the crowd with while the other he passes down for someone else to help circulate air. The couple in front of us hold their sign higher, it reads, “The Struggle” with a picture of an outlet on it. Overall our time there is over too quickly. The Outro begins and we realize it’s coming to an end. The lights begin to dim and as quickly as they had appeared BTSM was gone from sight (really just crouching under the table). A few minutes go by but it’s apparent that the crowd is not going to dissipate. You hear a low rumble again as the obligatory encore begins. As they rise though, they have removed their helmets and are ready to rage with us. The last couple of songs were the perfect end to a random Wednesday evening. When the lights finally came up, the trio of BTSM literally walked off the front of the stage to shake our hands, take pictures, and sign posters like the pastors of a church coming out to greet the congregation. They were friendly and down to earth, they thanked everyone who walked up them and hugged freely. I have only seen BTSM one other time and they did a sunrise set at Dancefestopia in Kansas City. They were amazing then and equally so that night. We had just experienced The Church Tour in all it’s glory and in such an intimate setting you couldn’t help but feel revitalized for the rest of the week.