After meeting some people from Revolution Radio at Okeechobee Music & Arts Festival, I found out that they are Miami’s only electronic dance music radio station. While I lived in Miami, all I heard over the radio was the same thing, Top 40 commercial mainstream music. It was endless and infected every single channel. Unfortunately for me, it wasn’t till after I left Miami that Revolution Radio was created. This radio station plays nearly every genre of electronic music ranging from the latest techno and trance, to dubstep, deep house and more! Revolution Radio also has some big name supporters from the industry as well. Some of these names include Axwell, Paul Van Dyk, Nicole Moudaber, Bob Sinclar, Don Diablo and Markus Schulz.

You can tune in to this radio station at 93.5FM in Miami-Dade County, 104.7FM in Ft. Lauderdale and 100.7 HD2 on Hi-Def Radio. If you’re not located in South Florida like myself, you can check out their app with a 24/7 live stream, all you have to do is search “Revolution Radio Miami” in both the Google Play store or the Apple app store. 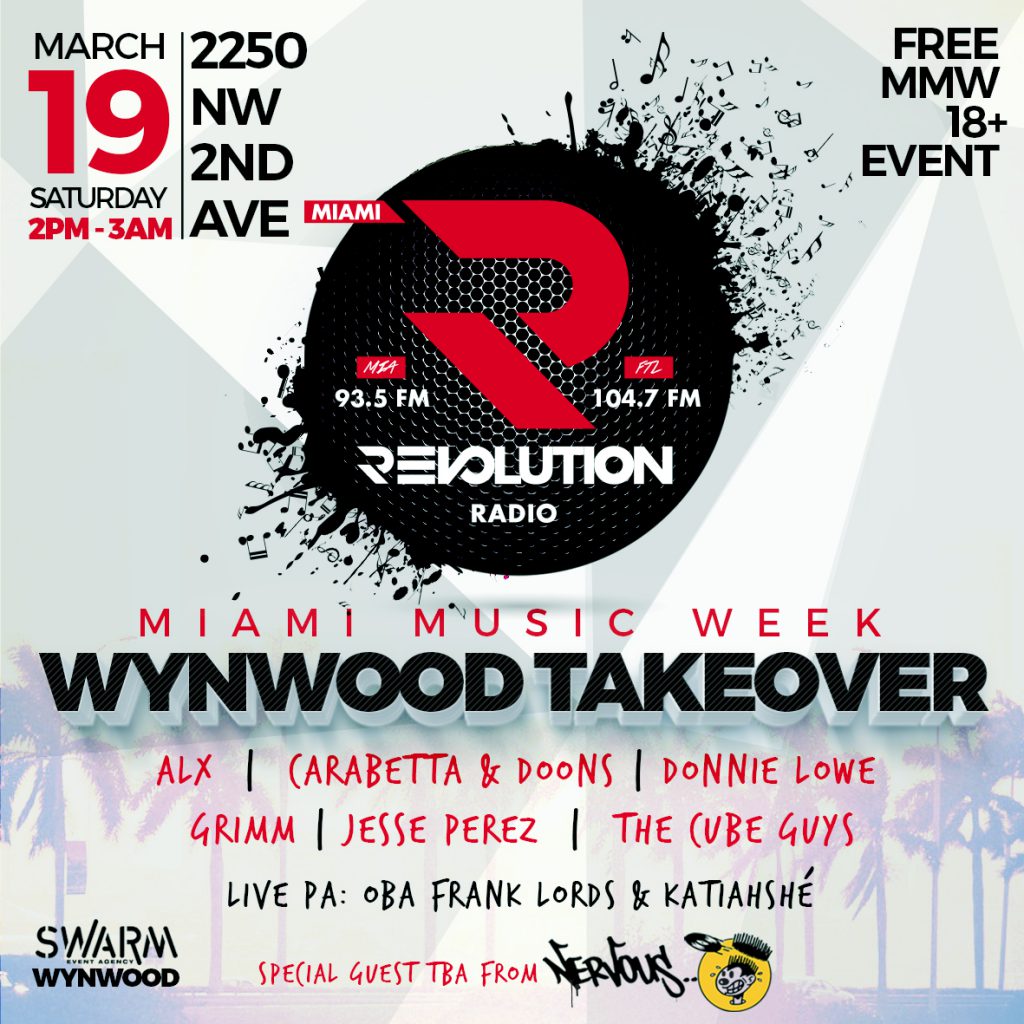 In celebration of Miami Music Week, and to thank all of their listeners, Revolution Radio will be hosting their inaugural takeover event at the heart of Miami in the Wynwood District on March 19th. The event will include to the public free admission into the event to anyone 18 years or older. Apart from the location, the lineup will also be including some of today’s hottest names along with Miami’s dark, neck and groovy sound. Some artists include ALX, Carabetta & Doons, Donnie Lowe, Jesse Perez, The Cube Guys and Revolution Radio’s very own Dark Sessions resident and Madhouse in the Morning host DJ Grimm. The party will be raging from 2PM until 3AM. Apart from the plethora of artists joining in this takeover of Wynwood, there will be a very special guest joining the mix, the NYC based label, Nervous Records, along with live performances from Oba Frank Lords and Katiahshé. This Wynwood Takeover will be taking place in the SWARM Event Agency tent, next to the Mana Wynwood located at 2250 NW 2nd Avenue.

Now apart from the sick beats Revolution Radio will be laying down, guest can take part in exclusive giveaways, food trucks, live art installations and so much more! Expect only the best during this Wynwood Takeover by Revolution Radio.

Be sure to RSVP on the Facebook event page.