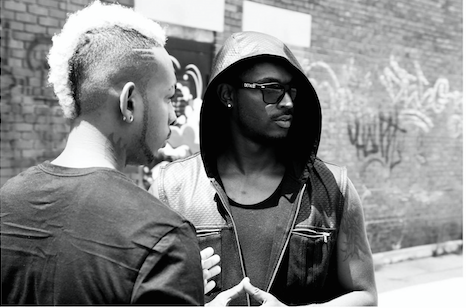 The Saunderson Brothers (Dantiez and DaMarii Saunderson) have teamed up with Italian DJ/Producer Nihil Young (Frequenza) and got experimental in the studio to create a trippy 2-piece progressive techno EP titled “Clear”. This is The Saunderson Brothers’ debut on the new refused. label. Keep an ear out for these guys. You’ll be hearing this guys more and more soon.

In case these are new names to you, dearest reader: Nihil is a bit more established since starting in 2008, and his music is generally within the genres of House, Minimal and tech House. His biggest blip on the radar so far was for his contributions to the song “Good Time” [link to sample HERE], which reached top 5 for Beatport in 2011 and nominated for best Techno track for that year. The Saunderson Brothers are two of the sons to techno legend Kevin Saunderson and very new to the scene. Don’t let this fool you, their talent is already here. They recently performed at the Detroit Movement Festival, and found at least some of their set so you can see some of their energies.

“Clear” has a combination of strong, pronounced kicks and a low rumbling bassline.  This song is consistent with its energy yet constantly developing new elements. When I first heard this song, I immediately remembered a bit more upbeat version of older tracks by Sam Paganini.There is an subtle sinister-ness to the track, a la Doom II levels or other old first person shooters.

“Golden Teacher” starts off with a simple, clean kick and clap, but builds nice momentum throughout. It has a space-y mellow groove, with a variety of snare drums, effects, sizzling percussion and a droning vocal sample. What I like most about this song is just how much is going on without it being overly distracting or erratic. It has many different effects, but the originality of it all definitely intrigues me.