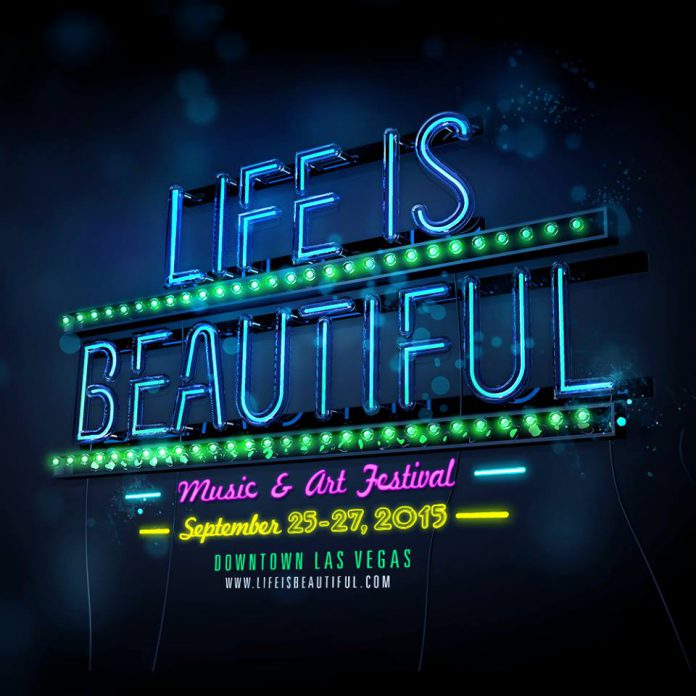 Life is Beautiful is more than a music festival: it is a combination of extremely talented musical artists, world renowned chefs, inspirational speakers, and Vegas vibes. These reasons make this fest one of the best in the west. I have been to many festivals prior to this one, but 2014 was my first year attending Life is Beautiful. From day one of my 2014 experience I was already planning how I would get back to Downtown Las Vegas for the 2015 festival.

There are many aspects that make Life is Beautiful the festival to attend, but one of the main reasons for me was its location. Taking place at the end of the Fremont Street Experience, Nevada law permits you to have an open alcoholic beverage inside or outside the festival for patrons of legal drinking age. This means that you can enjoy a cold frosty beer as you adventure around Fremont Street to check out the fluorescent lights and Vegas culture. Another perk of being over 21 in Downtown Las Vegas is that you are surrounded by many well-known and classic casinos like Binions Gambling Hall, the Golden Nugget, and the D. You can test your luck in anything from a low stakes Black Jack game to a high stakes game of Roulette. If the cards are right and Lady Luck is on your side you might even be able to leave the weekend up on some extra cash. There are also some things you can only get in Downtown Las Vegas; for example, the Heart Attack Grill. This burger joint is located on the corner of Las Vegas Boulevard and Fremont Street and is known for its delicious hamburgers and staff dressed in hospital gowns. The burgers are the perfect remedy for your hangover. Just be sure to finish all the food you ordered or you may be in for a surprise! Another aspect that makes Life is Beautiful so amazing is the unique urban setting. The festival is located right in the middle of Downtown Las Vegas and everything is strategically placed within the grounds. Winding through the blocks of the festival you can find the different stages, custom artwork, gourmet food and beverages, a variety of attractions, and entertainment. My group booked our hotel room at the El Cortez not knowing that it would be one of the most prime locations to stay for Life is Beautiful. The El Cortez is located on the corner of 6th and Fremont Street. We came to find out that the festival entrance was located right outside the El Cortez’s main casino doors. This was a huge advantage because we did not have to worry about leaving early to take a taxi (which saved us time and money), we were able to freely move in and out of the festival to recharge and relax, and we were able to utilize our beer supply that stayed frosty in our hotel room. Going in and out of the festival was never a hardship because the security line never took us longer than 5 minutes to regain entry. Lastly, if you missed an important set that you wanted to see there were Life is Beautiful artists playing local venues after the conclusion of each day. This means that if you planned accordingly you could see almost every artist you wanted to see regardless of the conflicts in set times at the festival.

Between Life is Beautiful’s line up, location, and culture this event has proven to be more than just a music festival. Although this is only the event’s third year running it continues to improve and become better each year. I will definitely be planning next year’s trip early and I highly recommend grabbing a 3 day pass for this year before they sellout! Life is Beautiful Festival 2014 had 5 stages: the Downtown Stage (Main Stage), the Ambassador Stage (Secondary Stage), The Western Stage (musical artists and the Learning Stage), the Huntridge Stage (Side Stage) and the Container Park (Chef’s Stage). Every stage had a great lineup and brought its own personality to the festival.

The Downtown Stage hosted a diverse group of headlining acts over the weekend including the Foo Fighters, Kanye West, Outkast, the Weekend, and the Arctic Monkeys. This main stage was a bit smaller than the Coachella main stage, but had no shortcomings when it came to sound and production. My favorite sets of the weekend from this stage were the Foo Fighters and the Beatles Love performance. At one point on Sunday you could hear the Pretender being rocked by the Foo Fighters throughout the blocks of downtown Las Vegas. The Ambassador Stage was the second biggest stage and had a number of artists that could give the Downtown Stage a run for its money. Artists included Panic! At The Disco, the Flaming Lips, Alt-J, Tycho, and Skrillex. If you got to the stage even 5 minutes early for the set you wanted to see you were able to get a good spot in the crowd. Even during the headlining sets like Panic! At The Disco and Skrillex there was enough dancing room in a good spot without getting in anyone’s personal bubble. The Queen cover of Bohemian Rhapsody by Las Vegas natives Panic! At The Disco was the highlight of the weekend for me from the Ambassador Stage.

The Western Stage was a great supporting stage and hosted musical artists such as Jenny Lewis, Matt and Kim, Kimbra, MS MR, and Kacey Musgraves. Matt and Kim and MS MR each brought so much energy to their sets. Kim got the crowd even more pumped when she came into the middle of the audience for a small portion of the set. The Learning Series also took place at the Western Stage. Presenters included social innovators, business leaders, activist, technologists, and artists. Notable speakers throughout the weekend were festival founder Rehan Choudhry, Pussy Riot, Oscar Goodman, Ricki Lake, and Amelia Rose Earhart. The Huntridge Stage was a great side stage that hosted big name artists such as RAC, Galantis, St. Lucia, DJ Mustard, and Ryan Hemsworth. With this being one of the smaller stages it was never too hard to get to the very front for most sets. Also, the main stages drew the bigger crowds away so sets on the Huntridge were much more intimate. This was also the only music stage with grass which provided a soft cushion to give your feet a rest while listening to some amazing sets.

The Container Park was home to the chef’s stage. Celebrity chefs over the weekend included Cat Cora, Sam Marvin, Jose Andres, Marc Forgione, and Scott Conant. Most of the demonstrations occurred during the day and were very interactive, educational, and entertaining. It was extremely cool to see the world renowned chefs doing what they do best. Making the best tasting and smelling dishes!

Overall I think the set up for each stage was great. The sound on each one was on point and there was no sound overlap because each stage was far enough apart from one another. Also, each stage had a great lineup so no matter where you ended up you were bound to see an amazing artist. One of the only opportunities for improvement was the 7th and Ogden bottleneck. If you were in route from the Downtown stage to the Ambassador stage, or vice versa, you had to trek through the bottleneck along with everyone else who had the same idea.