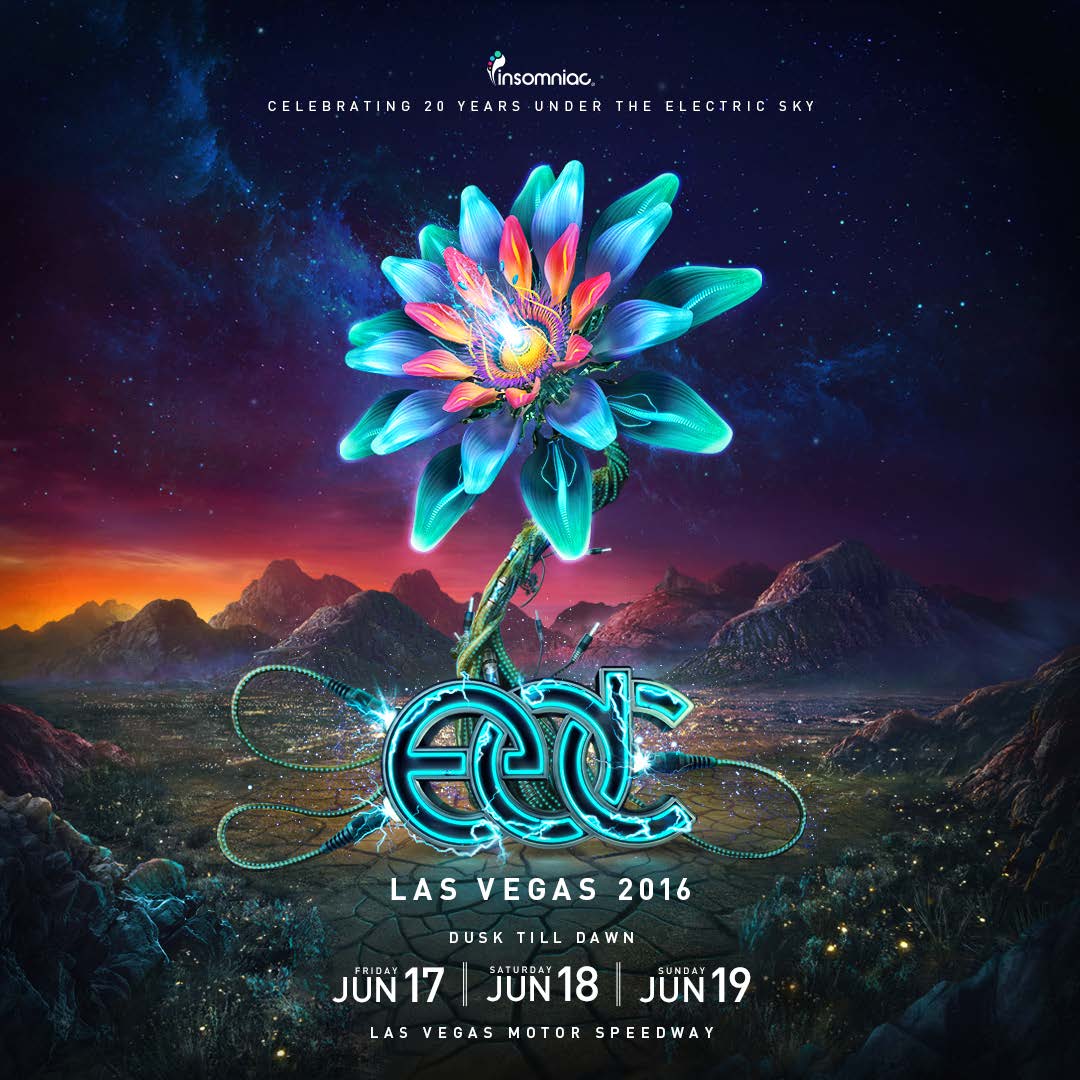 Its definitely a bit early for EDC Las Vegas news, but due to the tax hike that will occur in October, Pasquale and the Insomniac Team is announcing EDC earlier than ever before to help save you some dough. Here is the 411 on this year’s event so far!

Insomniac announced the world famous Electric Daisy Carnival (EDC), Las Vegas will return to the Las Vegas Motor Speedway, June 17, 18 and 19, 2016 for an incredible gathering of music, art and individuality. Celebrating 20 years of dancing Under The Electric Sky, Insomniac will bring to life its most creative and immersive experience to date.

“Seeing the growth of EDC over the last 20 years has been an amazing experience, one I am truly grateful for,” said Pasquale Rotella, Founder and CEO of Insomniac. “To commemorate two decades of incredible memories, I want to give dance music fans the journey of a lifetime. Without their passion and support, EDC would not be what it is today. I can’t wait for everyone to see what we have in store for 2016!”

This past June, EDC Las Vegas brought together a sold-out crowd of more than 400,000 people from around the world, ready to experience this global phenomenon. General admission tickets for the event sold out in record time once again, before the release of the festival’s impressive lineup.

Insomniac transformed the 1,000-acre speedway into a fully immersive neon-lit playground, where Headliners were treated to performances from over 200 of the world’s top dance music artists across eight newly designed stages. Fans explored more than 20 immersive art installations, witnessed 72 wedding ceremonies, feasted on local and organic food truck fare, and made new friends while riding full-sized carnival rides, including EDC’s iconic Ferris wheels. More fans than ever witnessed the magic of the festivities with the EDC Las Vegas live stream, reaching millions of viewers around the world.

Last year, Insomniac partnered with eBay to host its first ever “EDC Week Charity Auction,” allowing fans to bid on once-in-a-lifetime experiences such as behind the scenes tours, helicopter rides and passes to all of Insomniac’s events for an entire year. Generous bidders came together to raise approximately $70,000 for Culture Shock Las Vegas, a nonprofit organization dedicated to empowering youth through performance art and dance, while steering them away from substance abuse, violence and hatred.

Tickets for EDC Las Vegas 2016 go on sale Monday, September 21 at Noon PT, months sooner than in past years to ensure fans have the lowest admission price possible. Starting on October 1, 2015 all passes purchased will be subject to a 9 percent tax due to the passage of the amended Live Entertainment Tax (LET) in the city of Las Vegas. Fans are encouraged to purchase tickets early to avoid the tax pricing and ensure their passes to this year’s event.

Single day tickets will not be available for this three-day experience. Layaway pricing options will be available for all ticket types. Further on-sale details and shuttle information are now available at LasVegas.ElectricDaisyCarnival.com.

Exclusive hotel deals, the return of EDC Week and the fifth annual EDMbiz Conference will be announced in the coming months.

For the most updated details regarding EDC Las Vegas, head to