I dont know if I ever ‘started’ with the electronic scene, I always felt as if if was a part me, a new chapter to discover with each moment as I got older, hopefully a little wiser. I remember being a kid and growing up, not having many friends, being bullied for never having the cool clothes, not liking whatever pop star hollywood had spawned out for the month, never understanding kids my age. I understood pixels, bright colors and 8 bit sounds pulsating from my Nintendo 64, those were my friends. I did not have much else, just those pixels bouncing around on screen. I gained friends and notoriety with the anime and gaming scene, and that was my first encounter which  would end up being the rest of my life. The game was called DDR or Dance Dance Revolution. It was an imported Japanese dance game took over my life, and was the introduction to shaping who I would become in the rave scene, 2004. I remember countless Friday nights, the arcade would be packed and there we were, geeks without a home. The colors, the upbeat fast paced tempo of happy hardcore or UK hardcore, the camaraderie with like minded friends, the phat pants, the glow sticks the sleepless nights. We were the small rave culture brewing in southern California. At the time we didn’t have much just the sound of the underground. We turned that arcade into the rave. All practicing our moves on the dance pad, making a home where we weren’t wanted. We were always the stigma, we were always a pariah. No one wanted our business, no one accepted our kind, our bright colored hair and dark cyber goth clothes. We grew up knowing we would always be the unwelcome kind, the ones no one wanted to keep, but soon enough wanted to be.

In High School my tastes grew and though my first loves will always be happy hardcore, hardstyle, drum and bass, psytrance and trance, other genres began to be popular. We grew to understand the new genre emerging which at the time was dubstep. During the “Skrillex” era of EDM we began to see an emerging trend with our new music, hearing it on the radio being familiar with similar sounds from our time. As I got older my taste in music grew, yet my mentality always maintained an understanding that this is the home for those who never quite found it anywhere else. I started adopting those who shared the same mentality and who needed somewhere to belong. Before I knew it I was graduating from high school early just to go to the raves with my friends at the age of 16. (remember when raves were all ages?) ohh I do. We would all pack our little bodies in a tiny Honda Civic and drive out to the desert or the middle of downtown LA to pack our bodies in these hot abandoned warehouses just to get a taste of sanity, our sanity. Pretty soon raves became our trips to Disneyland, I would coordinate everything. Kandi sessions, ride situations,
scheduling artists times, and places for my family to crash. The next thing I knew my name became “Mama Bear”.
Mama bear of the good vibe tower tribe. We stood tall no matter where we went and always enforced the code
of ravers. Peace with humanity. Love among everyone, Unity with our culture, Respect with each other. We were the ones who would make sure the girl in the corner was okay, that anyone who looked slightly thirsty got to drink cold water and any one who needed a hug or a smile, we were those people that gave that to them.

I live in a fantasy world, a place in which I never want to grow up, when I’m listening to my music I lose myself in a world where all my problems dissipate. All my adult worries, bills, school, relationship problems melt away the minute that BPM hits me in the chest. I live in Neverland acting like Peter Pan by whisking kids away from the cruel reality of this world. We have one moment and one chance, it never dawned on me until I look back on my life and say….yeah, I guess I’ve always been that ‘raver kid’ whether I wore it on my sleeve or not. I so desperately looked for a that rabbit hole to fall into and immerse me into a whole world where who I am is perfectly okay. The hard work for my festival tickets to spend time with my family is always worth it. The network of strangers I’ve meet have become an extension of my rave family, and yet no scene is perfect a lot of people are quick to judge the fad or ‘plur’ is dead. It still exists but it only exists if you allow it to. Give it the love and nurturing any culture needs to bud and you will see the results you want. Give it time, give yourself time. We are all such beautiful children of the universe no one is allowed to tell
whats right and whats wrong. We live for the moments. And me? You can find me almost anywhere with BPM flooding the air, dancing among the lights with a big smile on my face, blue hair and a family waiting for you to call home.

My favorite artists include: Darren Styles, Porter Robinson, Above & Beyond, Technoboy, Seven Lions, Astrix, and Angerfist 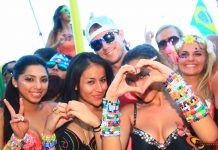