Want to keep the party rolling after the beats finish at CRSSD Festival Spring? Check out their After Dark parties to get your fix!

The house and techno family unites to kick the festival season off on the West Coast yet again thanks to the immense lineup of CRSSD Festival Spring. After revealing the full lineup, even greater excitement can be found for those heading to San Diego for the festivities as FNGRS CRSSD dropped the details for their After Dark parties this year.

These events invade the nightclubs of San Diego and sometimes jump into other experiences. They call on the brightest stars – both established and rising – to curate a sonic experience for those who attend and those who want to cut a rug but not at the festival. This edition is no different and sees Walker & Royce take the reins for the masses at Spin on Friday night to get everyone in a groove ahead of the festival weekend.

A sunny Saturday will begin with Justin Jay on the Hornblower. That night will see fans descend into the dark vibes of nightclubs like Music Box with SG Lewis and Miane and roll on with Solardo, ABSOLUTE., and Kudeki at Rich’s. Further, two of the biggest shows will see Gorgon City, Kyle Watson, and PAX dominate the Hard Rock while Nina Kraviz, Helena Hauff, Ilario Alicante, and Sara Landry tear it up at SPIN.

Sunday is packing some serious heat as well with Hammer and Harrison BDP kicking off the festivities on their own boat party. After the end of the festival that evening, Adam Beyer, Ben Klock, Rebuke, Eli Brown, and Batu will head to Spin, while Joris Voorn and Cristoph embark on a Hornblower voyage and Ben UFO and Joy Orbison play at Revel Revel.

Convinced you are ready for more house and techno to storm through the festival season’s kickoff? Check out the full list of shows and grab tickets for CRSSD After Dark parties will be available via their website. 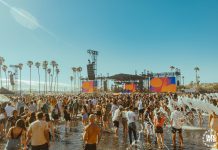