Although the lineup for the upcoming edition of EDC Las Vegas is yet to be revealed, we now know that legendary artist Sven Väth will be playing the festival!

There’s no doubt that the hype surrounding the upcoming edition of EDC Las Vegas has continued to build ever since the festival sold out in record time last year. Headliners from all over the world continue to patiently wait for Pasquale Rotella and the Insomniac crew to unveil the full lineup, but now another artist who has been on the wishlist of many has confirmed his appearance this year: Sven Väth.

There are few artists in the dance music scene who have a history that’s as legendary as Sven Väth. First taking up the decks at the age of 17 after falling in love with the genre after a trip to Ibiza in 1980, he got his first residency in 1982 and hasn’t looked back since. Over the past four decades, he has seemingly done everything in the scene from owning nightclubs to running labels, all while making music and touring the world.

In 2000 he founded Cocoon Recordings that has since gone on the be the home for many artists in the techno scene including Tim Green, Alan Fitzpatrick, and wAFF. Last year also saw Cocoon reach their 20th Anniversary milestone and Sven Väth spun the 2-CD mix album The Sound of the 20th Season that featured artists like Adam Port, Pig&Dan, and Josh Wink.

Today, Sven Väth took to Instagram to announce a bevy of dates for his 2020 World Tour that features stops at festivals like EDC Mexico, Time Warp, and you guessed it, EDC Las Vegas. We’re excited to see this news surface and can’t wait to catch this iconic artist take us to a state of techno bliss under the electric sky in May.

Stay tuned for more details as we await the full lineup reveal for the 10th Anniversary of EDC Las Vegas and send us a DM if you’ve received confirmation about an artist playing! 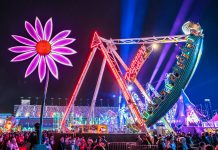