Dirtybird BBQ Los Angeles was the perfect way to enjoy the nice weather and build up hype for the upcoming edition of Dirtybird Campout.

The excitement had been building all week for Dirtybird BBQ LA and we couldn’t wait to get down to the sounds from some of our favorite members of the flock. Making our way up from San Diego, we parked our car shortly after 2:30pm and trekked around the LA Coliseum to the venue in Exposition Park. Hosted at one of the outer parks surrounding the massive stadium, you could already hear the beats as we approached the gates to the event.

That was when we were met with a line that stretched beyond the sidewalk, and since we arrived early it only took us around thirty minutes to get into the venue itself. Those who showed up later were met with much longer wait times that reached close to an hour with no clear reason why it was taking so long to get people into the festival.

Once inside, it was nice to see that the whole space was covered in grass with some large trees closer to the stage providing some much-needed shade. The edges of the venue were lined with food trucks, the BBQ (which was delicious by the way), merch, and plenty of vendors selling drinks. Adding to the fun this year was the Sizzle Stage which had a variety of skits and demonstrations for members of the flock to check out as well.

The biggest drag of the entire event had to have been the bathroom situation. Sure, there were lines to get food and drinks, but the lines for the porta-potties were incredibly long and full of very unhappy people who were pushing, shoving, and getting into fights with each other. It left many of us wondering why that logistical nightmare existed, but its something that could be fixed in the future.

Bad vibes at the bathrooms aside, the music was what really carried this whole event and for us, it started with a massive set from Justin Jay.

Having attended college right next door at USC, we were excited to see what Justin Jay would bring to the table at Dirtybird BBQ LA and he totally left us impressed. Playing everything and anything he wanted, there were plenty of house and techno grooves with some remixes too. It was different, fun, and that made it all the more special.

As Sacha Robotti took the stage, we would quickly learn that this would be the theme of the day. He also dropped some solid techno beats and played one of our favorite sets of the entire event.

By now the sun was slowly beginning to set and we ran into our friends Jason and Noemy.

Their excitement was both visible and palpable as I approached. They quickly told me that they had not been planning on attending Dirtybird Campout West this October which was a bummer. However, that had all changed with they entered the balloon toss. After a few close calls, their balloon buddy had held on all the way to the end and they were victorious. Winning passes to the festival this fall made for some exciting news and a fun memory from the event as well.

Just as Walker & Royce took the stage, another pair of friends surprised us as Jasmine and Deanne had appeared out of nowhere. While they originally weren’t supposed to be attending, they explained how they discovered the silver egg poster during the Dirtybird Scavenger hunt to win a pair of tickets to the BBQ!

Walker & Royce played a set full of some epic tunes and really kept the crowd grooving the entire time. We couldn’t have been happier for them to be the surprise guests for the show, and they even dropped a few unreleased gems that we can’t wait to grab in the future like the infectious tune “Bury Me At The Club”.

Closing out the show were Justin Martin and Claude VonStroke who both dropped some fire tracks.

Their sets were full of energy and some of the bangers they dropped have been stuck in our heads all week long. Catching Justin Martin masterfully mix a house set is always a good time, and he guided the crowd from start to finish. Claude also threw down an awesome set that was a rollercoaster ride full of house beats and even a touch of Drum N Bass as well just before the end of his set.

Closing things out well, he got on the mic to wish everyone a happy Cinco de Mayo and to remind them that Campout is coming up quick. The Dirtybird Crew was even selling presale tickets fee-free at the event, which was a nice touch for those who were looking to save some cash!

Summer is starting soon and Dirtybird BBQ LA was the perfect kick-off to the season and halfway mark to Dirtybird Campout West. The BBQ was great, the vibes were on point, and if the sets from this show are any indicator then we are all in for a treat this October!

Be sure to check out our full photo gallery on Facebook!

Are you planning on attending Dirtybird Campout West? Let us know in the comments! 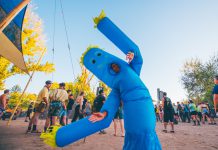