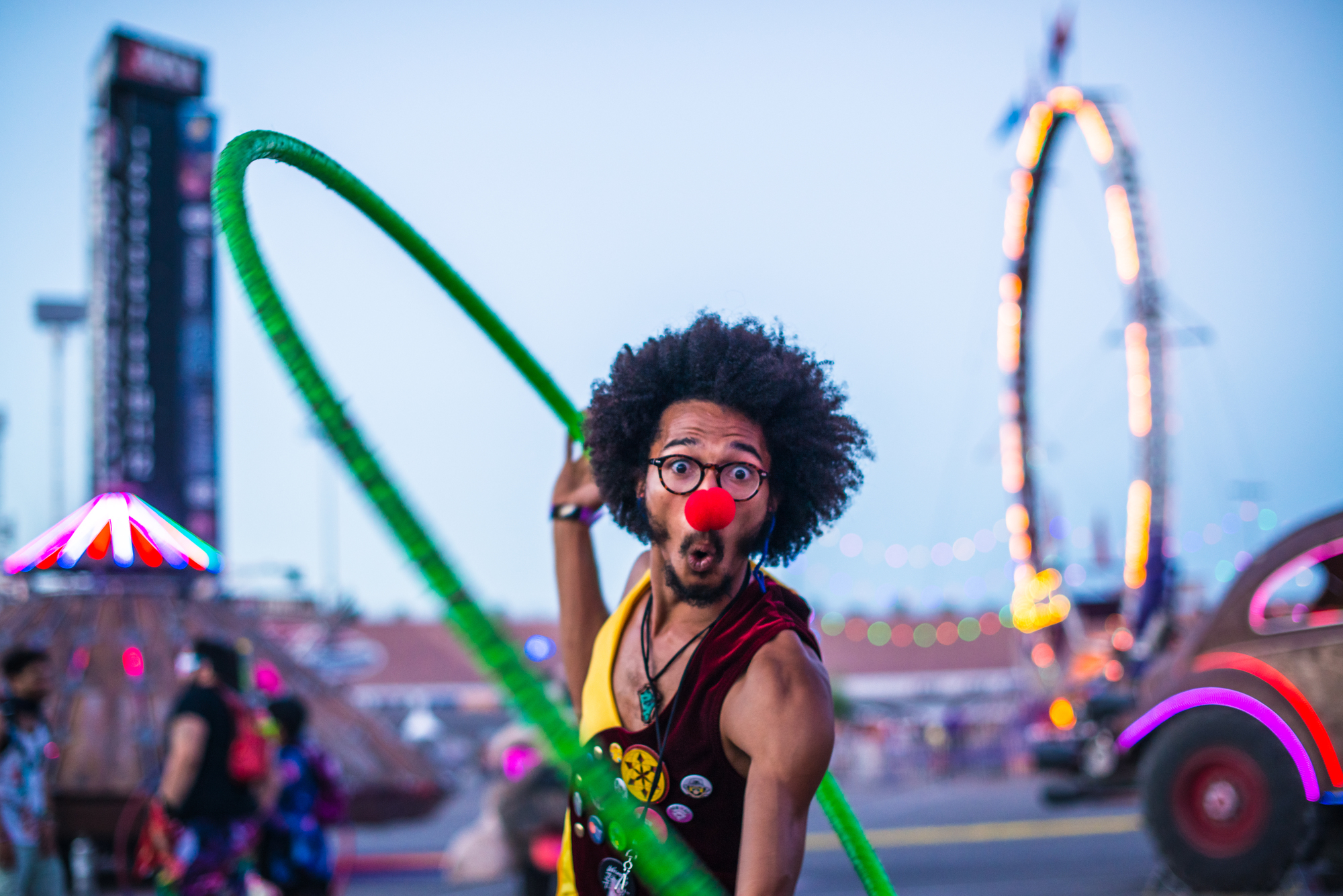 Photo Credit: Get Tiny for Insomniac

Raving solo doesn’t have to be a nightmare. Check out these five tips to help get ready for your first solo rave!

My first festival was everything you want from your first rave experience. Nocturnal Wonderland 2016: meeting new people, seeing cool things, and lots and lots of dancing. Two friends who had been in the rave scene a long time shepherded me around the festival, introducing me to key concepts like trading kandi, staying hydrated, and why holding a good spot at the mainstage was so important. It was a perfect night.

But my second festival was a little less… utopian. The friend who’d taken me to Nocturnal was in the hospital, and knowing no one else in the scene, I decided to press on to Escape undeterred. It was going to be my first solo rave, and I devised a brilliant plan: I would drive up from San Diego earlier in the day, spend the whole night at the festival, probably meet some people, hopefully crash at their place and, if not, drive all the way back home after it was done. What could possibly go wrong?

As it turned out, absolutely everything.

I thought I knew what raving solo would be like. All the fun of Nocturnal, just without the friends, right? But I was wrong. I ended up chasing the feelings I had raving with my group, feelings I couldn’t quite recreate while solo, and it led me a dangerous place. Negative emotions and intoxicating substances don’t mix, and what I devised was a true recipe for disaster. I came out of Escape a little shook, unsure if raving solo was something for me.

But instead of becoming obsessed with the bad, I focused on the good. I met some really cool people, experienced some amazing things, and connected with the music like never before. I had simply approached it with too many expectations, and I realized that if I could narrow down what I wanted, I could still have a good time. And since my SD friends weren’t going to any festivals in the future, it looked like it’d be all solo for me from there on out. So I learned how to adapt, and soon I was attending most of my raves by myself, but it wasn’t easy. Here are a few tips I wish I’d known when I first started.

Looking for what to do when you lose your friends at a festival? Check out our helpful guide!

First of all, know what you’re getting in to.

Raving solo is a different beast than going with a group. It’s more focused on the music than the community and finding moments of meaning and bliss within each set. Instead of coming together with your friends to have an incredible communal experience, it’s about finding a place within yourself to let go and enjoy the night, to have a great time and dance your ass off, to rage and to reflect. If that’s something that still interests you, then raving solo is for you.

That’s not to say there’s no communal aspect to it. You’re probably going to meet new people, make new friends, and do a lot of the same stuff you would with a group. But an important part of raving solo is that you’re comfortable being, well, solo. You’re probably going to spend long stretches alone, dancing or chilling or waiting in line, and being comfortable with yourself is the most important first step which, of course, is easier said than done.

To rave solo, you really need to get to a place where you don’t care what other people think of you, and that you’re there for yourself and no one else. In order to have a good time, you truly have to leave the baggage of your life behind and go in blind. It’s liberating and is a great way to become more comfortable with who you are as a person, but it’s definitely intimidating at first.

Next, make sure you know why you’re there.

This next tip is actually a warning. Before you buy that ticket to your first solo rave, think about why you’re going. What are your expectations for the event? How attainable are they, realistically? One thing that I thought would happen at my first solo event was that I was going to find the perfect rave group and that we would all bond and be inseparable. That didn’t happen, and it crushed my first night of Escape, leading to some questionable choices throughout the weekend.

With no one to pick you up when you fall, things can go south fast. So make sure that you reconfigure your expectations to a different level than you would with your friends. Are you going to meet a ton of amazing people? Yeah, maybe, but don’t bet on it. Are you going to have a great time dancing to amazing music? Absolutely, yes. And that, by itself, can be enough.

If you want to connect with people, you might have to do a little more work.

Still, meeting people at a rave is important, and I’ve found its much harder to do if you’re solo. For my first few solo festivals, I would sulk, confused and annoyed that no one was coming up and talking to me. The reason is simple: if you don’t give people a reason to interact with you, no one will.  If you’re sports-model beautiful with the confidence of a minor god in the Greek pantheon, then you’ll probably be fine. But if you’re like me, and you’re not, I’d recommend investing in (and getting good at) a Flow Toy.

You’ve probably seen the most popular Flow Toy by now: the Glove, used for “gloving” or giving “shows” where people move their hands in front of you while your eyes roll back into your head and your mind is blown. Each Flow Toy, however, serves the same dual function, allowing you to connect with the music while also giving “shows” for people at the same time. Since each Flow Toy is decked out in LEDs, ravers gravitate towards them like moths to flame. Give someone a show, talk, exchange kandi, hang out with them for a bit, move on, repeat… this is a cycle I’ve found has worked pretty well for me at events.

As for the toys themselves, I would recommend getting a Pixel Whip. Gloves are banned from a lot of events, so I would go with an alternative. Whips are pretty easy to use without too much practice and are more “interactive” than the other toys, allowing you to wrap them around yourself and your audience.

Check out the Space Whips from GloFX and start practicing for your next event!

Don’t forget to find your flow.

Since you’re solo, festivals become all about you and the music. One of the greatest things you can focus on is strengthening that connection by finding your flow. What’s flow? Flow is a trance state that you’ve probably felt before — it’s when you get “in the zone.” Wikipedia lists a bunch of different definitions, but in terms of dance music, it’s basically this: empty your mind, focus completely on the music, and never stop dancing. This opens up your brain to new experiences in a way that is hard to achieve in a normal setting. In the most reductive possible way, it’s high without being high. Give it a try.

Here’s where those Flow Toys come in handy once again. They help you get into your, well, flow, merging light with sound to get your mind and body fully invested in the music. When I whip, I frequently get into states where my movements are so in sync with the music that everything else melts away and intense euphoria washes over me (and I’m sober, no less!). Once you’re there, you can I’m not sure what it is, but seeing LED lights ripple out in front of you is like a hug to your brain.

I know this might sound like some real hippy-dippy shit, but trust me, it works! It’s your best bet for getting the most out of your rave experience while solo.

When I’m not attending raves, I’m working during them as Ground Control for Insomniac. Along with being an amazing work experience, it’s also taught me a lot of good tips for raving solo. We have a few one-hour breaks throughout the night, and during those breaks, we can roam the festival and see whoever we like. The problem, of course, is that we can’t choose when those breaks are, and so missing the artists we want to see is extremely common.

At first, this was heartbreaking and demoralizing — I wanted to catch that Porter Robinson set, dammit! — but after a while, it’s given me a certain type of zen. It allows me to let go of putting all my stock in specific DJs to make my night and instead focus on the joy of the music and the dancing. Every time I’ve done this, I’ve always stumbled on some artist I’ve never heard before that blows my mind and still had a great time. It’s given me the faith to trust festivals to provide an amazing experience even when I’m missing the very people I was dying to see.

So how would you achieve your festival zen? I would start by listing out your musts. Who are the DJs you absolutely have to go to? Then ask yourself what would happen if something else good got in the way. What if on the way over there you pass by a smaller stage with an unknown DJ who is killing it? That’s fine — stay, listen, enjoy the moment. You’re no longer tethered to who your friends want to see, or the expectations you’ve set for yourself. Just be there, now, in the moment, and flow from that moment to the next, and so on. By doing this you’ll find pockets of bliss where you never expected them. I practically guarantee it.

Bonus Tip: Going solo means you can also leave whenever you want! Having a bad time? Too tired from a long day at work? Head home! You set your own schedules now.

Do you have any tips for raving solo? Make sure to share them in the comments!