The Lost Lands Music Festival organizers have taken to social media to make an official statement regarding the passing of two attendees this weekend.

Update, September 18: Excision has released a statement surrounding the passing of two attendees at Lost Lands. We’ll keep you posted with any further updates.

As the rumors and speculation continue to fly around social media surrounding deaths at Lost Lands Music Festival, very little information has surfaced to confirm what has been stated online. In our efforts to validate sources and provide accurate information, we refrained from publishing anything until official statements had been made to confirm or deny any rumors.

Just an hour ago, the Lost Lands team made an official statement on their Facebook Page to address the death of two festival attendees. While the actual cause of death is still unknown, our hearts go out to the families and friends of those who passed away.

We will continue to update this post as more information continues to surface. The official statement can be found below.

“Today we send our deepest thoughts and condolences to the loved ones of two male attendees who passed away after being transported to local hospitals this weekend. While the causes of these tragedies are still unknown, our hearts are with their families and friends at this time.

Our medical facilities are available twenty-four hours a day, free of charge, with the best emergency room doctors, EMTs and roaming paramedics in the country. A full staff of security and police are also available, and we encourage everyone to approach any of our 2000+ team members to ask for help if needed.”

One of the two attendees that passed has been identified as Mario Symborski.

Based off a post on Facebook by his wife, one of the males who passed away was Mario Symborski, an attendee from Michigan. If you’d like to donate to help with the cost of the funeral and other expenses, please head to the GoFundMe page that was set up for more information. 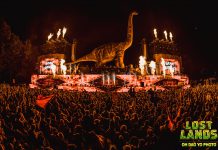