One year after ULTRA made it’s way to China, the festival brand is expanding to include one more Chinese city on their tour. With the success of last year’s event, this expansion should come as no surprise. Previously ULTRA China took place in the city of Shanghai but this year they will be adding the capital city of Beijing to the list of festivities. That’s not to say the festival has moved to Beijing but with the addition of ULTRA China Beijing now ULTRA will have back to back weekend celebrations!

Hosted on September 15-16 at the NHC Base in Beijing, this iteration of ULTRA China is certainly bringing in some heavy-hitters for the debut of the festival. Additionally, the festival will feature two of their famous stages, Main Stage and RESISTANCE, as well as the Ultra Park Stage, which features local talent.

Some big names will be on deck as Beijing will see the likes of Armin van Buuren, Tchami, Afrojack, Steve Angello, and Axwell /\ Ingrosso headlining the Main Stage! Artists on the techno and house dominated RESISTANCE stage include the enigmatic John Digweed and the Dark Queen, Nicole Moudaber. If this isn’t enough, there are three names blurred out on the lineup so more acts will be announced in the coming days! Information about the local talent playing has yet to be released.

Check out the full lineup below and let us know which artists you’re most excited to catch this year! Tickets for ULTRA China Beijing 2018 are on sale now. Grab yours today! 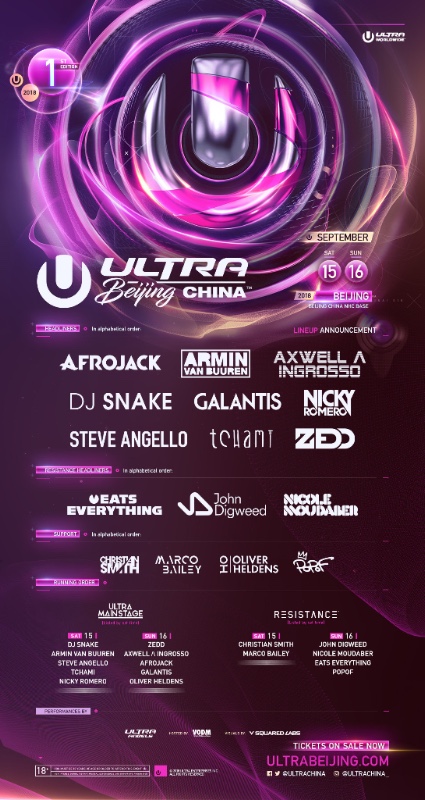