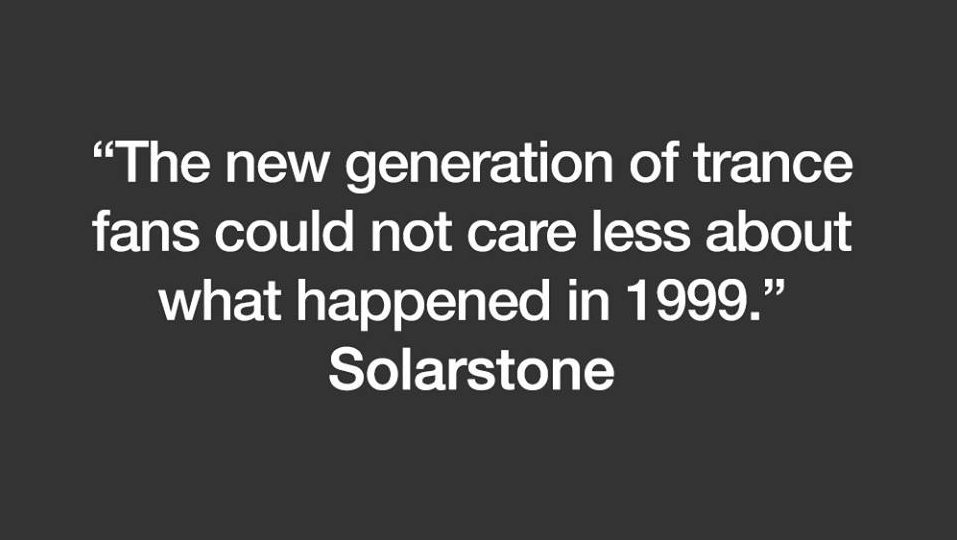 Thanks to the Pure Trance Team, a recent post on Facebook has the collective Trance Family going crazy debating the context.

Today, the Pure Trance Team, headed under the direction of Solarstone, posted a simple image to Facebook and opened the floor to debate.

Heated comments have flown around the internet in relation to this post – both in favor of the new and the classic.  As a bonafide fan of the genre, and after reading the comments flowing around, I decided that it might be good to lay some context and to gather my personal thoughts on the matter.

Want to know more about the recent Solarstone?  We interviewed him just a few months back!

First, let’s set this straight – Solarstone is not denying the history and respect of the genre.

In regards to history, it is extremely hard to say that Rich doesn’t have respect for the classic styles of Trance.  Heck, he helped write a number of songs considered by many to be classic tracks of the genre.  Take the track “Seven Cities” as a prime example of just that.

“Seven Cities” was released in 1999, ripe in the era he discusses in the post above.  It is perhaps a zenith track to epitomize the summertime mood and moving melodies of what Trance is.  He does not deny how important these tracks are, nor does he lack respect for his own work.

Having been in Ibiza and on a boat party with him in 2015, I heard him drop this track as the sun set on the Mediterranean Sea.  He loves this track and what it means to his fans.  With that in mind though, remember he has continued to produce tracks year after year to continue moving the genre forward.

If a quick look back into the discography of the labels Solarstone has attached his name to doesn’t show this, I admittedly don’t know what does.  We could take a stance and look at Pure Trance and Pure Trance Progressive only…but let’s dig a bit deeper into the history books.

From the Solaris-era you’ll find talents like Alucard, Mike Shiver, Mark Eteson, Mark Pledger, Bot Cipryan, Matt Cerf, Majera, LTN, and Forerunners.  This doesn’t even bend the page to see who was selected to create remixes under these artists, but I’m picking out two samples below for you to peruse.

Then there is Matt Cerf’s “Let Me Breathe” which features his wife Jaren on vocals, remixed by Noel Sanger and Shawn Mitiska:

From there we can rewind further and look into the era of Deepblue Records.

FKN released “Why” with vocals by Jahala — that was touched by Aly & Fila for remix duties!

Then there was the original release of Bobina’s “Lazy World” in 2004.

The examples from both the Solaris and Deepblue eras above help shed light on his perspective on the #PureTranceDebate.

It is clear to see the foundation Solarstone comes from when developing his thoughts and releasing the statement he made on Facebook.

With the above all in mind, I offer this response in the debate in favor of Rich’s statement:

For the fans, it sounds strange but it’s about context. The comment is about supporting the new wave of up and coming talent – say a Forerunners or Sneijder three to four years ago. It focuses on where the genre is heading, rather than the legends of yesteryear. In some ways, he means breaking away from old-school talent like Ferry Corsten and Paul Oakenfold (who chase trends over sticking to the genre) and giving new people a shot. Rich doesn’t mean that the music they make today isn’t good, or that it isn’t Trance right now. He just wants to see support for the new at something like Dreamstate or the rebirth of Trance Energy.

Don’t get me wrong, I love a ton of old-school Trance guys, and would love to see Johan Gielen get a set here. I’m stoked to see Marco V play at Dreamstate and throw-down Trance. Yet, Marco V left the genre years ago and lacks any major accomplishment for the modern Trance community. That’s the context of the comment. He wants us younger guys in the scene, who’ve been working hard for years to get any recognition in our local or break into the national/international scene. He’s excited for people like Niko and Triceradrops to break through the ceiling and take the mantle forward.  He wants talent like Magnus to grow and take over what makes the genre great!

Rich is tired of seeing events (and maybe it is a regional thing) that revolve around Trance of old, or bringing back talents that may have been popular around the turn of the century. I for one would rather see Forerunners over a Tiesto set at this point. I’d rather see Shugz over Dash Berlin/Alice Deejay. That’s the point he’s trying to make. In fact, a part of me really wanted to hear what Neptune Project would have done with a “open-to-close” set down in San Diego without the classics moniker.

Here’s the magic — there is no reason a DJ can’t play classic tunes! If you want to strictly play a set of them, sure, label it as a “classics” set. When you have the table before you, open to take people on a journey, why not give them something vivid and new, instead of relying on memories of sounds gone past? As a DJ personally, I’m not afraid to weave in Arksun’s “Arisen” with modern tunes in a set. I’ll take Marco V’s “Godd” and slam it into two FSOE Excelsior tunes… or whatever.

I understand the counterargument for why Ferry/Paul/Dash are on lineups over the rising talent. That is not what he is discussing from the conversations we’ve had (the true cash flow issue of festival production and maximizing the base that comes through the door). He’s talking about why people like Alex Ryan or Ally Brown can’t get a gig but people keep booking someone like Armin hoping for that magical classics set that blows all of our old-school minds. Why don’t we stop wishing for the past to be the present, and focus on the present and future of the genre being great?

So given the context above, what are your thoughts on this #PureTranceDebate?

Should we worry about what mattered in 1999 or should we focus on new territory for the genre?

Tell us your thoughts in the comments and join in the debate in our Facebook Group!