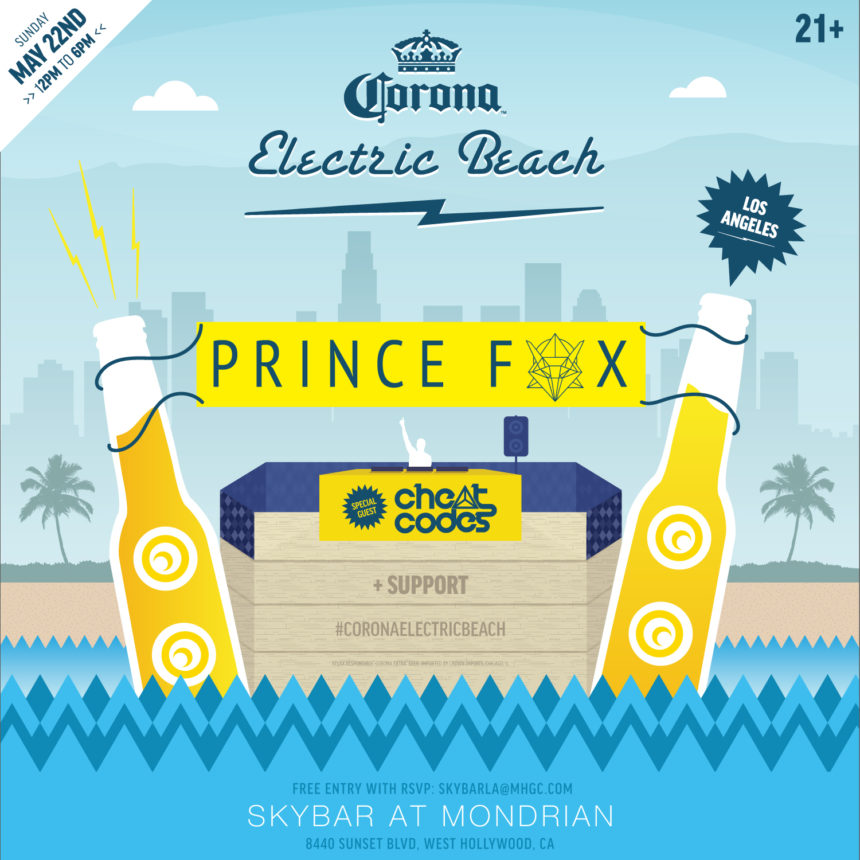 Corona Electric Beach is an event series that has expanded across the nation to give attendees from all over the country the sounds of EDM in the context of a beach party. In its first event of the year in Los Angeles on Sunday, May 22nd the party starting crew will be taking over Skybar at Mondrian for an afternoon day-party from 12pm – 6pm. The event will be headlined by quickly risen DJ/producer Prince Fox, with supporting acts by LA native trio Cheat Codes and more TBA. This Corona Electric Beach event is a 21 + summer kick off that is free with RSVP here.

Get To Know Prince Fox:

Rising New York City producer Sam Lassner, better known as Prince Fox, is quickly climbing up the ranks of success in the electronic music scene. He’s a senior at New York University where he studies music technology who uses his spare time to work hard at refining his craft and developing new sounds from his production. Prince Fox strives to maintain his versatility as a producer, and surprise his fans with something new with every record and show. He plans to release his debut EP this year that highlights his signature sound, along with his impressive range as a producer. He’s remixed Sam Smith, SNBRN, Atlas Bound, Lemaitre, Kanye West and even more with an innovative and future flair.

About Skybar at Mondrian:

Boasting one of the most beautiful views of Los Angeles, Skybar is an open air ivy-covered pavilion perched above the Pool at Mondrian Los Angeles. Ever since opening, the Skybar’s newly re-imagined design brings a fresh approach to this iconic space. A chic poolside lounge by day, Skybar provides an oasis to take in the sun while moving to the music. When the sun sets, the pulse of Skybar continues to beat louder.