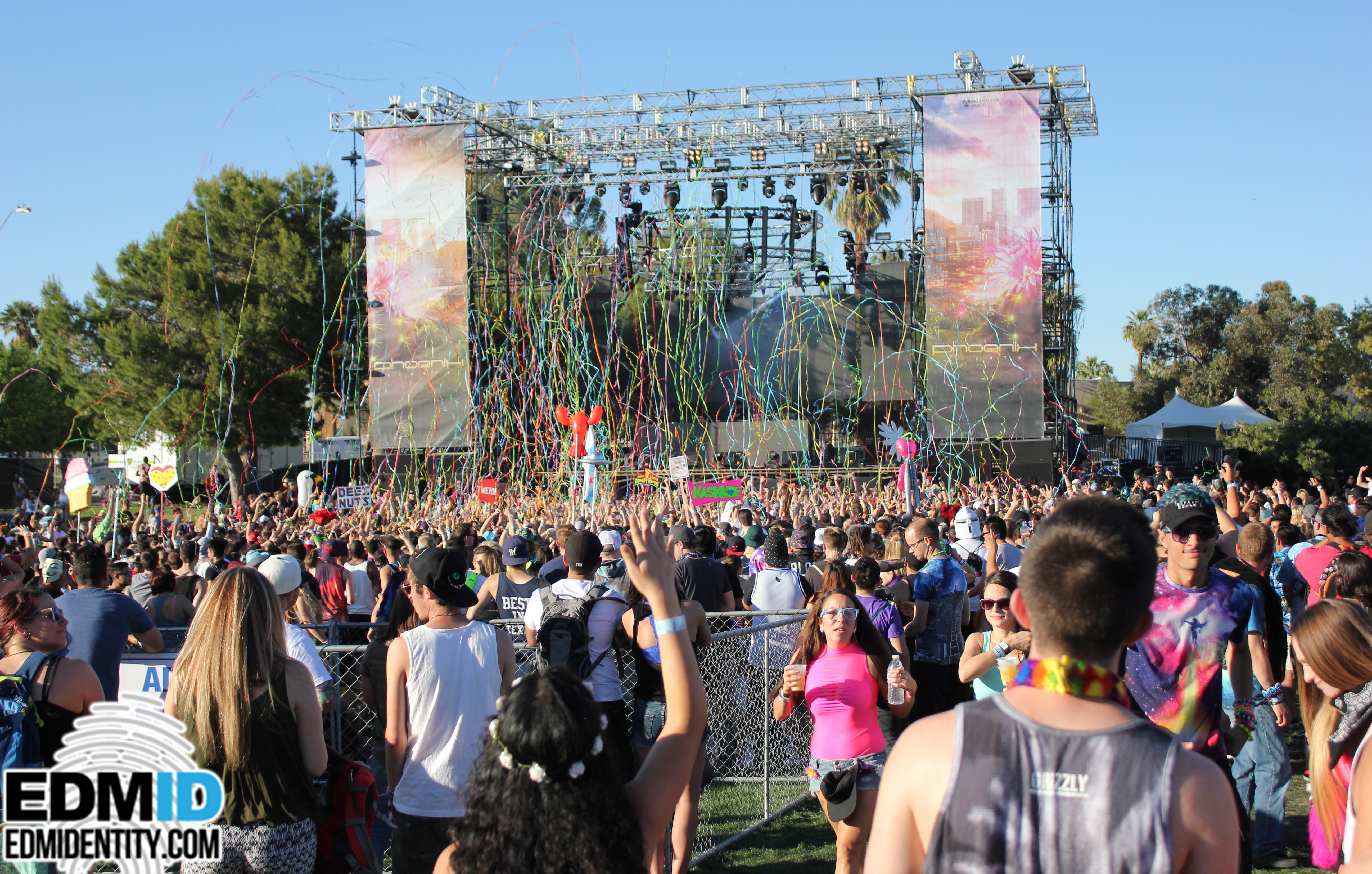 Phoenix Lights Festival was a single-day festival last year with a main stage and a local stage. Due to its success, the festival vowed to double down and become bigger, which is exactly what they did. We got there shortly after gates opened. My friends and I had to go to will call to obtain our passes. The line for will call was fast and extremely organized. We had our tickets and in line for entry in a matter of minutes. Security was thorough but not over the top; they did their job but weren’t aggressive about it, and always told us to have fun once we passed through. We came in facing the Invasion stage. The DJ booth was surrounded by a box of panel screens where teeth would occasionally appear. From the box stretched yellow tentacle arms and above were two more panels to give you the visual effect of an octopus-like alien seemingly ready to consume the crowd. Placed around the grounds were inflatable pink polyps to continue the alien theme. In the back of the Invasion stage off to the side, there were a grove of trees offering up shade in the mild heat. The trees were also used to hold hammocks — a completely unexpected, but welcomed sight. As we walked toward the main stage, we passed by a wide variety of vendors. There were booths selling diffraction glasses and masks, kandi necklaces, and other merchandise. Halfway between the stages, there was a silent disco next to a shaded tent where you could find an artist painting pictures that were available for purchase. Relentless Rangers could be found walking the grounds with spray bottles of water offering a cool down for passers by,  and they could also be found manning the water station ensuring the grass didn’t become a mud pit — which commonly happens at festivals that have self-serve water. The main stage was called the Mothership and looked like one too. To the far left of the main stage was the VIP area which was equal parts grass and vendors with an elevated stage for a view almost parallel to the DJ deck. Opposite the VIP area were more trees providing shade. This tree line was a common place to find your glovers, poi users, and hoopers. The space was open and covered in grass that invited you sit anywhere. We positioned our group toward in the shade of the art tent just as Illenium got started. It was my first time seeing him and I was very excited. His set started out with his classic melodic bass style and got to the point where he wanted to play something “harder” for us. The next drop had my friends asking, “can you believe he made this?!” proving that Illenium isn’t bound by a single genre. The next sets by BTSM and Yellow Claw were exactly what the crowded needed as the sun began to fall below the horizon and you could feel the night start to come alive. Almost everything across the grounds lit up in some way with a phenomenal panel of screens on the main stage for Eric Prydz to really stimulate us. We split time to see some of Jai Wolf’s set and ended the night with Kaskade’s set — a great preview for our next adventure at the official Phoenix Lights after party, a Redux set! During the next day, the check-in process and entry was just as smooth as the day before. This day was a little warmer so sitting in the shade seemed to be a strong option for a couple of the sets we started with: Cut Snake and Drezo. This day was a day that would be split between both stages multiple times so we were thankful for the size of the venue. Also, attendance was full but not overwhelming so the walk between stages was never a struggle. From the photography pit, I was able to meet some of the regulars against the barricade. One of them, Judah, told me that they had been there the night before and getting this close wasn’t very hard due to the niceness of the crowd. Their smiles were infectious and after trading kandi and helping them get some pictures we parted ways. After gathering some last minute supplies (food and water) from the vendors, I met a group from Phoenix that had attended the event last year. We bonded over the bandannas we had both purchased during the flash sale on iHeartRaves. My friend said it was good but that this event was even better — they definitely planned to return next year. We talked about the variety of events that come to Arizona and this was one of the larger ones. They would rank Phoenix Lights for price and lineup to be one of the top festivals for Arizona. We exchanged Instagram information and I prepared myself for Tritonal’s set (a personal favorite of mine). The set had us raging into the night and I was able to meet one more friend, Grant. He seemed to be by himself, so offering him a piece of gum was a quick ice breaker. I learned he had separated from his group to make sure he got a spot for Excision. This was only his fourth festival and his favorite phrase of the night was that this “exceeded expectations.” The group I was with met up one last time before DJ Snake – the last set of the night. A rush of energy flooded the crowd as he appeared on stage. We walked deeper into the crowd to get a better view. The audience was malleable and it was easy to get in. Midway through the set, streamers exploded from the stage covering everyone in multi colored paper. Frequent fireworks would occur synchronous to the drop and the crowd would start jumping. Each night the festival ended at 11PM, giving us plenty of time to make our journey back to San Diego on the last night. As we walked past the glowing art pieces towards the exit gate, we watched one more round of fireworks touch the sky. The farther we got into the park towards our car the dimmer the lights in the distance became. There may not be very many festivals in Phoenix, but this is definitely one I would like to see #TheLightsReturn next year. I didn’t know very much going into the event as I didn’t attend the first year. The size of the festival and the venue actually reminded me a lot of the experience I had at Dancefestopia. What I found most interesting was the people. They were all extremely approachable, but I think by virtue of the amount of festivals, many of them hadn’t experienced the open community that runs rampant at other events. Every group that I approached was very excited to talk to me, but I basically always had to start the conversation. This event is a pivotal step in the growth of the EDM community in Arizona, and I can’t wait to see how they continue to evolve!