Moogfest – the synthesis of music, art, and technology – announced their tenth, and most experiential, lineup yet. Headlining performances include Gary Numan playing a three night residency of his early albums, a two-night residency by GZA, ODESZA, Laurie Anderson, Oneohtrix Point Never, Suzanne Ciani, Blood Orange, and Sun Ra Arkestra; with keynote presentations by trans-humanist activist Dr. Martine Rothblatt, and computer scientist Jaron Lanier, a pioneer in the field of virtual reality. More than one hundred other acts are already confirmed to perform, while the conference program continues to develop in partnership with a range of esteemed universities, innovative businesses, and art/technology organizations. Program partners include MIT Media Lab, Google, Duke University, Georgia Institute of Technology, The New Museum’s New Inc., IDEO, Gray Area, and the EyeO Festival.

During the day, Moogfest explores the future of technology and creativity with a mind-expanding conference featuring panels, workshops and installations. At night, Moogfest celebrates the future of sound with performances by early pioneers in electronic music, alongside pop and avant garde experimentalists. Notably, this announcement features many creative thinkers–like polymath artist Laurie Anderson, and GZA of the Wu-Tang Clan–who will participate in multiple parts of the diverse program.

For the first time ever, Moogfest will take place in Durham, NC. Moogfest activates seventeen venues, throughout the downtown core, from intimate galleries to grand theaters, including a free outdoor stage with participatory, all-ages programming. Durham promises to be an ideal setting for Moogfest: a city who uniquely blends diversity, authenticity, world class innovation, and culture, with a long history of great music. 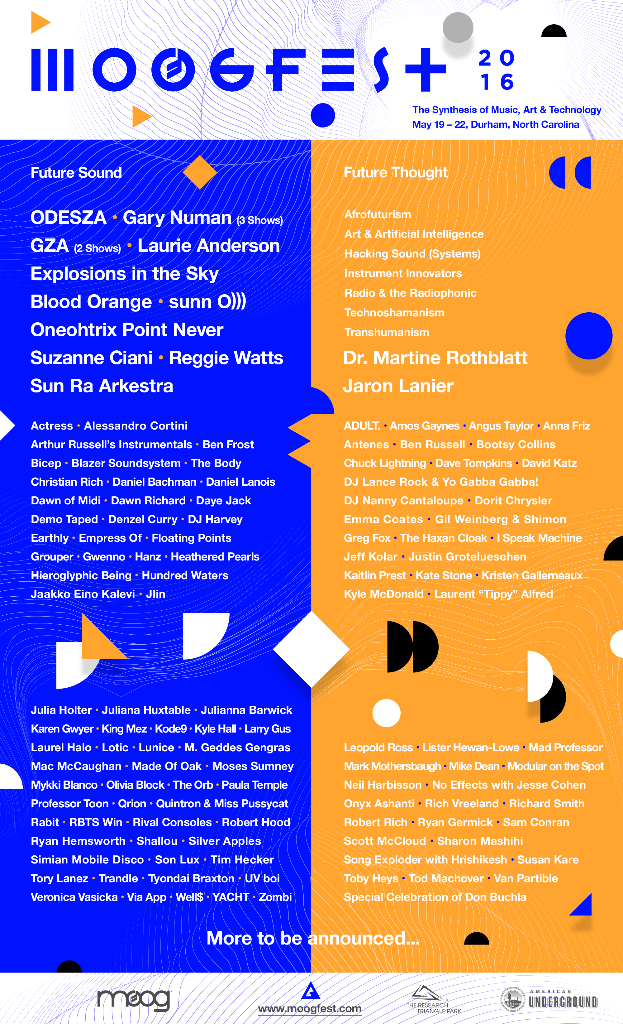 Purchase Here
■     General Admission for the duration of the event, May 19-22. Access to all festival venues for performances and conference programming: conversations, workshops, and installations.

Purchase Here
■     VIP access for the duration of the event, May 19-22. *Priority access to all festival venues for performances and conference programming: conversations, workshops, and installations. Access to exclusive VIP viewing areas and VIP/artist events. Gift bag. Complimentary food and drink in select locations. Passes available for pick-up at your hotel. Special merch deals. More perks to be announced.*Subject to capacity and based on first come first served

Purchase Here
■    This two-day synth-building workshop, led by Moog engineers, invites a select group of enthusiasts to build their very own unreleased Moog analog synthesizer and sequencer. The hands-on workshop is conducted in two, three-hour sessions within a pop-up Moog production facility. No experience necessary, but basic soldering knowledge is recommended. Participants in the Engineering workshop also have VIP access for the duration of the event, May 19-22.  *Priority access to all festival venues for performances and conference programming: conversations, workshops, and installations. Access to exclusive VIP viewing areas and VIP/artist events. Gift bag. Complimentary food and drink in select locations. Passes available for pick-up at your hotel. Special merch deals. More perks to be announced. *Subject to capacity and based on first come first served.

Moogfest is the synthesis of music, art and technology.

By day, Moogfest is a platform for conversation and experimentation. This mind-expanding conference attracts creative and technology enthusiasts for three days of participatory programming in Durham, North Carolina. By night, Moogfest presents cutting-edge music in venues throughout the city. Performing artists include early pioneers in electronic music, alongside pop and avant garde experimentalists of today.

Moogfest is a tribute to Dr. Robert Moog and the profound influence his inventions have had on how we hear the world. Over the last sixty years, Bob Moog and Moog Music have pioneered the analog synthesizer and other technology tools for artists. This exchange between engineer and musician is celebrated with a unique festival format where the creative process is understood as a collaboration among many people, across time and space, in commerce and culture. For more information on Moogfest visit their website here.