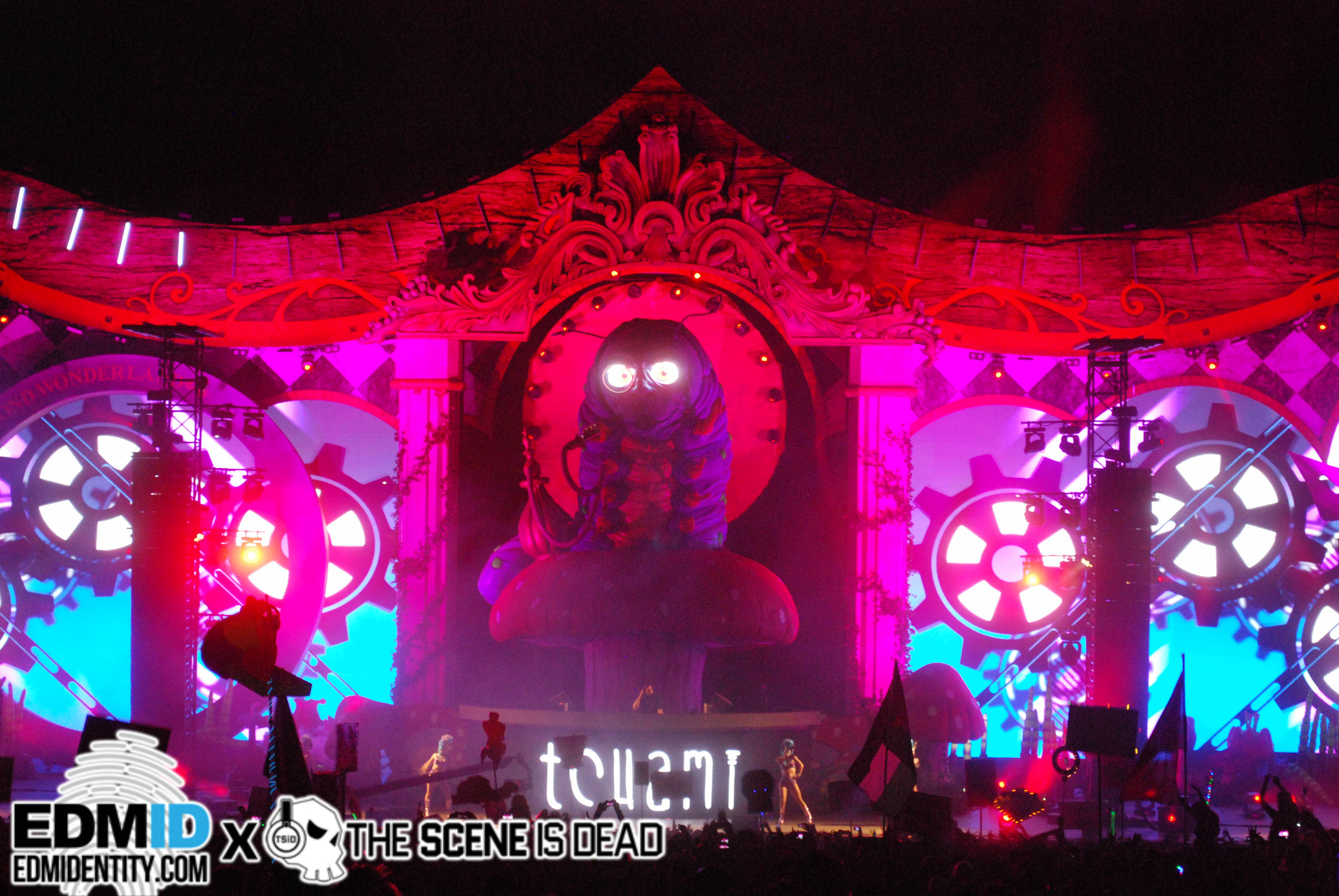 Event review can also be found over at The Scene Is Dead by clicking HERE!

As we drove from San Diego to San Bernardino, the excitement for the return of Beyond Wonderland was definitely in the air. I stopped by the media check in hotel and then quickly departed to the hotel that my rave family and I would be staying at for the weekend to get ready. The girls finished getting ready, fixing their hair and costumes and everyone was making sure that they had all of their batteries charged and tickets in hand as we left for the venue. The traffic to get to San Manuel Amphitheater on the first day was not that bad, arriving to the venue and parking in about an hour  of traffic. Rushing over to the EDC Reddit meetup was the next step on our journey through the night. Kidnap Kid was playing at the main stage, the Queen’s Domain, as my group began to form nearby at the Cafe which boasted of food trucks and unique eats. After some photos and decision making we headed down the mountain towards the Mad Hatter’s Castle to catch some serious psytrance with Simon Patterson. The visuals playing behind Psymon during the set were colorful and completely eye-catching as he led everyone deeper down the rabbit’s hole. The sun was beginning to set so we headed over to the Cheshire Woods to check up on Green Velvet, whose set was bringing us back to an era when Detroit was pumping out the best in techno sounds. Having seen Green Velvet many times, I decided to head over to an artist that I had never seen live before, Tchami who was going to begin playing at the main stage. My group arrived in time to see his set from beginning to end, I was actually pretty impressed at how much fun I had and Tchami’s set was definitely one of the highlights of my weekend. After Tchami, I opted to head back down to the Mad Hatter’s Castle to catch Astrix. The energy down there was unreal as he unleashed a set that was a great blend of old meets new. If you didn’t know, Astrix has been churning out some amazing hits since 1995 and his sets completely represent a breath of fresh air in a time in which many DJs continue to play the same few songs on rotation over and over. If you have never seen Astrix before I highly recommend seeing him. Not wanting to miss Dillon Francis, the Queen’s Domain was calling us once again. This go-around I spent some time in the VIP section, which was not only seriously upgraded since the last event that was at San Manuel but also included a ball pit to jump into! During his set there was a slight power mishap, but it did not change the fact that he brought the house down with some high energy tunes. My group decided to end our night with the trance family, so we caught Andrew Rayel and Aly & Fila before heading back to the hotel. I woke up on Day 2 with a serious cough from all the dust I had consumed on the first day. Getting ready was a breeze and we headed off to the venue, which half of my group endured the enormous amount of traffic that was on the 215. The complaints about the traffic have been driven home by many posts on both social media as well as other event reviews, and I have no clue how the police who should have made this easier than anything screwed this up so bad. Many people didn’t even get into the venue, and the other car that was with my group was in traffic for nearly three hours. The second day was definitely colder than the first, evident by the sell out of jackets at any of the merchandise booths throughout the venue. Beginning our night with Art Department at the main stage, we listened to a bit of Insomniac regular Umek before heading over to the Bassrush Stage(Mad Hatter’s Castle) for Delta Heavy. I separated from the crowd for a bit to check out Nicole Moudaber’s set at the Cheshire Woods, the energy in that tent was unreal and you if you told me it was electric I would believe you due to Nicole’s crazy hair-do. Slander has become a group to not miss so I ventured back over to see them play a high energy set for the third festival in a row. They brought the house down with their remixes and lead perfectly into Brillz. I was getting a bit hungry so I left Brillz set for a bit to go taste some of the different food options that Insomniac brought with them for the event. Sad that the instant ice cream people had disappeared after the first day, I ended up grabbing some carne asada fries that were not that bad! Back to the Mad Hatter’s Castle I went for Sub Focus, who’s MC killed it, and the beginning of Andy C before heading back up the mountain to end my night. Even though I was not in the crowd for Showtek, you could basically see the energy steaming off those who were there to dance away the last hours of the event. After ending their set in homage to their hardstyle roots with “FTS”, Knife Party took the stage to close out the festival. While I’m sad that I did not get a chance to catch D-Block & S-Tef-An’s set over at the Mad Hatter’s Castle, I had an absolute blast listening to Knife Party. Hearing some of their latest tracks alongside “Antidote” and their remix of “Save The World” brought me back to when I first started getting heavy into the electronic music scene. The food options were abundant, and I wish that many of the vendors had stuck around for the second day as I missed out on some of the fun items like instant ice cream. As always, Ground Control were rock stars and every single person that I encountered brought positive vibes the entire time, more than making up for the security woes. While I didn’t mention the Funk House much, I did spend a considerable amount of time chilling out there in between sets and while I was walking between the main stage and the lower stages. VIP was beefed up quite a bit compared to the last event that was there, which was a great added bonus. Overall I had an absolute blast at the event. Outside of the issues with traffic and dust there really was not that much that Insomniac could have done better this time around. Security was really hit or miss, and there have always been issues with them at this venue. I’m not exactly sure how to fix that issue but even I was told(while wearing my media badge) that I could not bring my DSLR in. When you have three different security companies running and no one knows what is actually going on there seems to be a huge flaw in that. The people who worked for Insomniac at the front were able to clear up issues but many people were left with a sour taste in their mouth during the entrance to the event.