The Highs and Lows of ARC Music Festival 2022 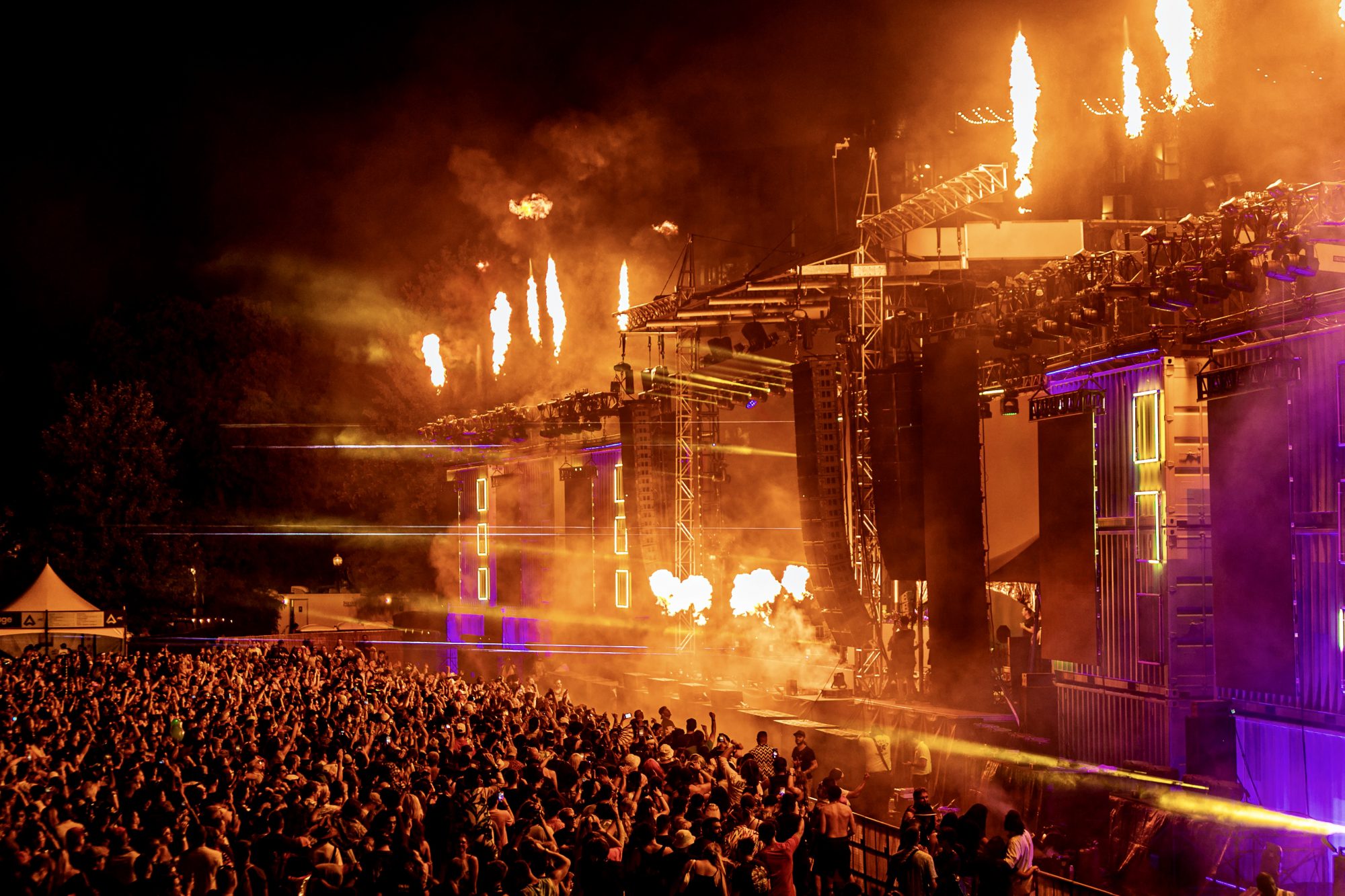 ARC Music Festival brought a great overall experience with a few bumps along the way as it returned to Chicago for its sophomore edition.

Since the very first time I stepped foot on festival grounds back in 2012 for EDC Las Vegas, I’ve fallen desperately in love and devoted to the scene. For the last decade, I’ve traveled all over the country, making beautiful memories at events like Dreamstate SoCal, TomorrowWorld, Electric Forest, and Dirtybird Campout. But, when the pandemic hit, the emotional struggle pummeled me like a freight train, and it has taken me a bit of time to get back on my feet and travel again. But then, ARC Music Festival was announced and something deep in my heart begged me to stop overthinking and grab a ticket.

Just like the inaugural edition, the lineup was absolutely stacked this year, and I began counting down the days until I could venture over to Chicago for the very first time with my beloved friends by my side. When the day finally arrived, I had high hopes that this could potentially be the best weekend of my life. I mean, three days of nothing but house and techno in the city that literally birthed the former? I was ready to shake it on down until my feet fell off.

As I approached the gates on day one, the boom of the bass on the other side of the fence made my heart skip a beat. I was back in my happy place after two and a half years! After moving through security which was an incredibly quick, efficient, and pleasant experience, I entered the grounds, and unfortunately, my joy turned a bit sideways.

Instantly, I felt bombarded by an array of competing basslines bouncing off the ARC Car, interfering with its neighboring stage, Expansions. I figured this issue could be addressed by sniffing out a better spot to stand, but I quickly realized that unless you were all the way at the front of the stage, you could hear quite a bit coming from the ARC Car and, at times, even elrow.

Upon further investigation, this turned out to be the case at every stage.

The left side of elrow was bombarded with bass from The Grid, the backside of elrow was competing with The ARC Car and Expansions, and even The Grid had sound issues as the bass seemed to oddly bounce and reverberate off of the VIP tent areas that lined the rear. The bass reverb became increasingly intolerable during Carl Cox’s set to the point of being wildly offbeat over the washed-out top-end and melody. So, unfortunately, even with this being my first time to see the king in action, our group made the decision to head back to elrow for Paco Osuna.

Now, before anyone says, “just move to the front,” I offer up a quick reminder that the entire crowd can’t be in the front. There will always be a back side of the crowd. Why should the people in the back have a less than great experience because of their location? In fact, for many people, including myself, the back side of the crowd offers the perfect spot to escape the tightness and heat of the inner crowd, and it’s often a mental and physical health necessity. In my many years of raving and festival attendance, the rear of the crowd has become a safe haven, and if done correctly, the sound quality can be just as great as in the front.

Unfortunately, sound bleed/quality is where ARC fell flat, but there is hope for the future.

How do they fix this issue so we can continue to enjoy one of the best parties in the country? It comes down to location or downgrading the stage count. The best idea would be to find a bigger venue that could allow for the stages to be set further apart, eradicating much of the sound bleed. Perhaps Douglass Park, where Heatwave is held, would be an option since it has a bigger footprint.

They could also choose a more rural location, and maybe camping could be in the cards or even expand later into the night. Of course, this would interfere with the mantra of the festival being in the heart of Chicago and the ARC After Dark series. But if given the option to stay at the festival or leave, commute, and deal with all the club logistics, I would choose extended festival hours every time.

Either option would be a massive undertaking, and it’s not as easy as snapping your fingers and landing the perfect venue. So, if ARC chooses to stay at Union Park, maybe it’s time to remove the ARC Car and place the incredible local talent on the main stages or figure out another solution to lessen the sound bleed by some other means.

Sound bleed issues aside, ARC Music Festival was still one hell of a party!

One of my favorite places to hang out during the weekend was Expansions. This stage was beautifully organic, and I bore witness to some of the most talented people on the planet, including Pan-Pot, Öona Dahl b2b DJ Three, and Giolì & Assia. We were lucky enough to have a bit of cloud cover on most days, and with the drizzle on the third day, I felt like I was standing at a stage in the rainforest, even with the buildings tucked close behind. I also loved the fact that the strobes were bright enough to add to the ambiance long before the sun went down.

When I wasn’t vibing out under the Expansions treeline, I spent most of my time at elrow. This is where I observed some of the wackiest things I have ever seen before, and I’ve been to Dirtybird Campout. This year the theme was Rowmuda Triangle, and between the giant trippy marionettes, the derpy chicken mascot, characters on stilts, hilarious lifeguards, and colorful sea creatures, it made me feel like I was part of an oceanic wonderland. It was under the cloak of insanity that Cloonee, Eats Everything b2b Skream, Justin Martin, Claptone, and Get Real tore the house down.

My only suggestion for elrow would be to add confetti canons at the rear of the stage and have the characters party further in the back to make it truly immersive. It felt like if you weren’t in the first quarter of the stage area, you were left out of the mania. Some of the characters did their best to throw confetti in the back, but they didn’t party back there for long, and it nowhere equals the amount of intensity flooding the front.

When it comes to The Grid, that stage had some of the best lighting I’ve ever seen. The moving heads scanned the audience during Boris Brejcha and had my eyeballs popping, while the lasers during Adam Beyer b2b Cirez D threw me into euphoric overload. They switched on during Adam Beyer and Layton Giordani’s remix of Sam Paganini’s “Rave,” and the entire atmosphere leveled up. And when those two dropped Enrico Sangiuliano’s “Sound Of Space,” I literally thought the mothership was going to emerge from the fog and abduct us all. Top it all off with an unexpected firework finale’ and l walked away from the weekend utterly fulfilled.

Through the highs and the lows, I believe that ARC has loads of potential!

One thing that I’m happy to report on is the absolutely delightful staff. Even when the credit card machines went down for a few hours, we were met with sincere apologies and free water while they quickly tended to the situation. There were never long lines for anything, including the portapotties, so kudos to ARC for making sure our needs were attended to. I really respected the small drink menu because it made the decision-making a breeze and the serving process streamlined, and even the food was high quality. I especially enjoyed the chicken teriyaki washed down with a cake pop.

This is just the beginning for ARC, and they’re already talking about a grand vision for the future. All I can hope is that they take the sound suggestions into consideration and make the necessary changes so that they can reign strong as one of the best house and techno festivals on the planet. And for the attendees that saturated the grounds with unyielding energy and positivity, thank you for showing me how Chicago gets down!