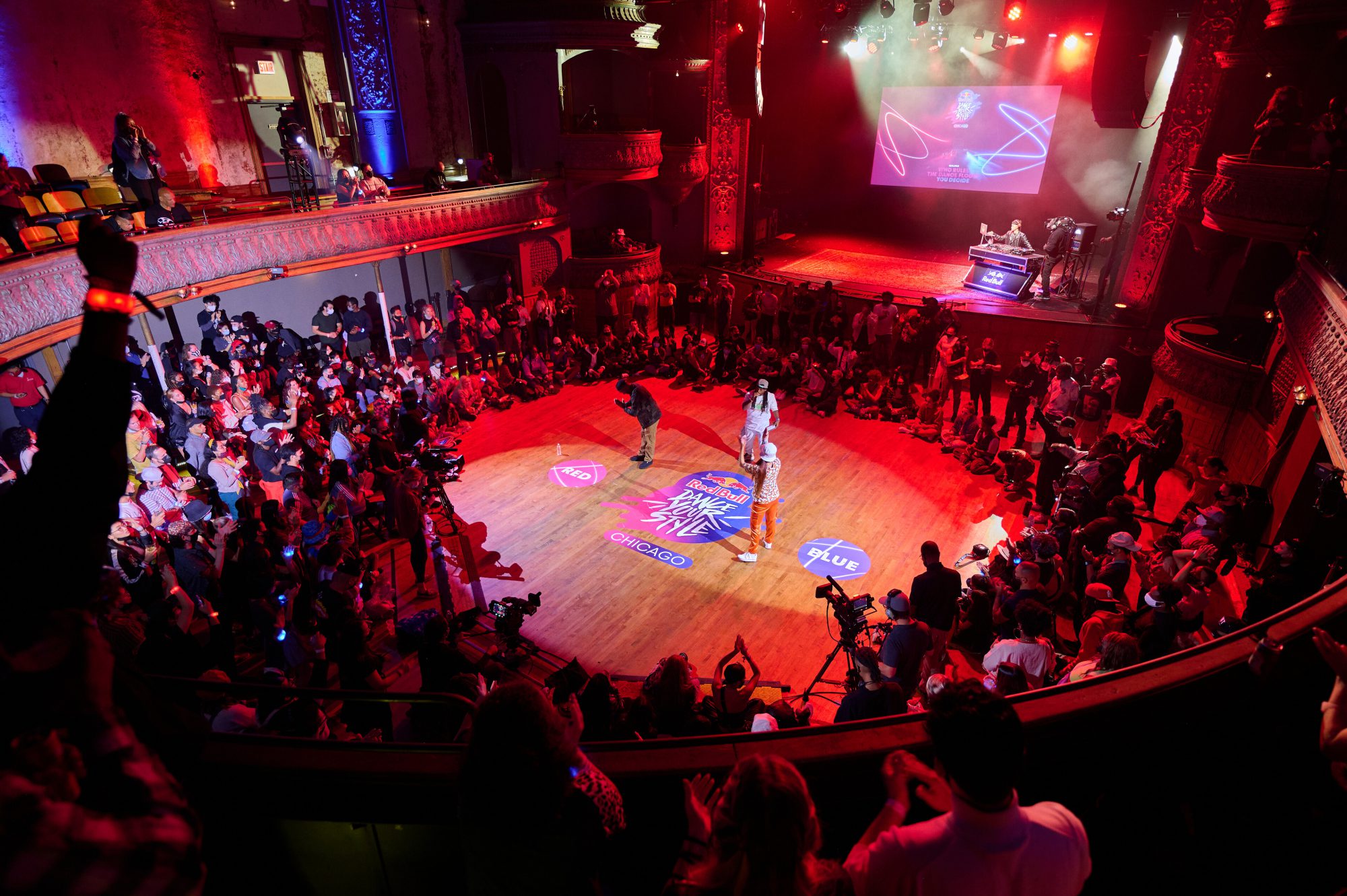 Red Bull’s global Dance Your Style competition made a stop in the Windy City with a focus on footwork, jitting, and more!

For years, Red Bull has hosted dancing competitions showcasing some of the world’s swiftest and most talented dancers. Dubbed Dance Your Style, its unique battle format has seen members of the movement community go toe-to-toe in 2021 at Qualifier rounds in cities across the US before the National Finals in Washington DC. One of those stops was the hometown of house music and footwork – Chicago.

Red Bull’s Dance Your Style brought out incredible local talents for everyone to check out on September 25 at Thalia Hall in the Southwest side of Chicago. This included renowned dancer Kid Nimbus, The Era Footwork Crew, DJ King Marie, and more. From the time the show began to the very end, it was all about dancing, music, and most of all love for the city of Chicago – and we were lucky enough to get a front-row seat to all the action.

Thalia Hall was lit up with eccentric energy that could be felt from the moment you entered the venue.

I was able to get a good view from the balcony when I walked in and could immediately get a good feel for the energy of the crowd and the performers. It was set up like a classic back-alley dance-off, with a crowd forming a circle around the two dancers battling it out. There were 15 rounds altogether, with each contestant having just one minute to show off their hottest moves. As the battles went on, the winners would then play each other all the way up until just a single dancer was left standing.

Something that stood out about Dance Your Style was that the crowd got the chance to participate in the experience as well. Before walking into the main dancefloor, we were handed wristbands that could light up either red or blue. After both dancers had shown off their moves, the MC called upon the crowd to hold up which team they liked the best. The lights would go down so that all the wristbands could be clearly seen, and the majority would be crowned the winner. The oohs and ahhs from the crowd at the collective light show every round brought a smile to my face, it was such a fun aspect at an event like this.

Throughout the dancing competition, other performers took the stage such as The Era Footwork Crew and The Pack Drumline And Dance Crew.

Although the competitors were the main focus of the event, super talented crews and individuals would take the stage between rounds as well. The Era Footwork Crew put the historic dancing style that originated in Chicago on display. Similar to house music, Footwork got its traction from Black music fans using the dance as a medium for self-expression. With incredible synchronization and cascading individual spotlights, this group featured some of the most talented dancers I’ve seen in a while.

Near the end of Dance Your Style, The Pack Drumline And Dance Crew took over the center circle and the crowd immediately went nuts. With snares, kick drums, tom-toms, they had everything, and it was like a halftime show at a football game. Not only were they playing the drums, but were also dancing simultaneously and even doing flips and tricks. It really pumped the crowd up for the last battles of the competition.

In the end, it came down to two dancers – the Chicago-famous Kid Nimbus and Lam Sedechu.

The whole night we had been voting and cheering on our favorite dancers, and now it was down to everyone’s favorite two. Kid Nimbus and Lam Sedechu were the last ones standing, battling it out and showing us incredible skills in footwork and tutting. Both were incredible dancers, but in the end, it was Kid Nimbus’ crazy flexibility, insane facial expressions, outrageous agility, and charisma that won him the trophy. The crowd roared with excitement as MC Bravemonk looked at all the wristbands for a final time and announced him as the winner.

All in all, Red Bull’s Dance Your Style made for a great night and one that really showed what Chicago is truly made of.

From the drumline to Kid Nimbus taking home the trophy, Thalia Hall was bursting at the doors with incredible talent. It was also a tribute to how popular Chicago dance styles have become and how it’s now getting recognized nationally. A big bravo to Kid Nimbus, Lam Sedechu, and all the contestants and performers in this competition. I’m definitely looking forward to attending another Dance Your Style event as soon as possible.

Stay tuned for the winner of the Dance Your Style Qualifier in Miami on October 17, and the National Finals in Washington DC on October 22-23 by following Red Bull on social media.