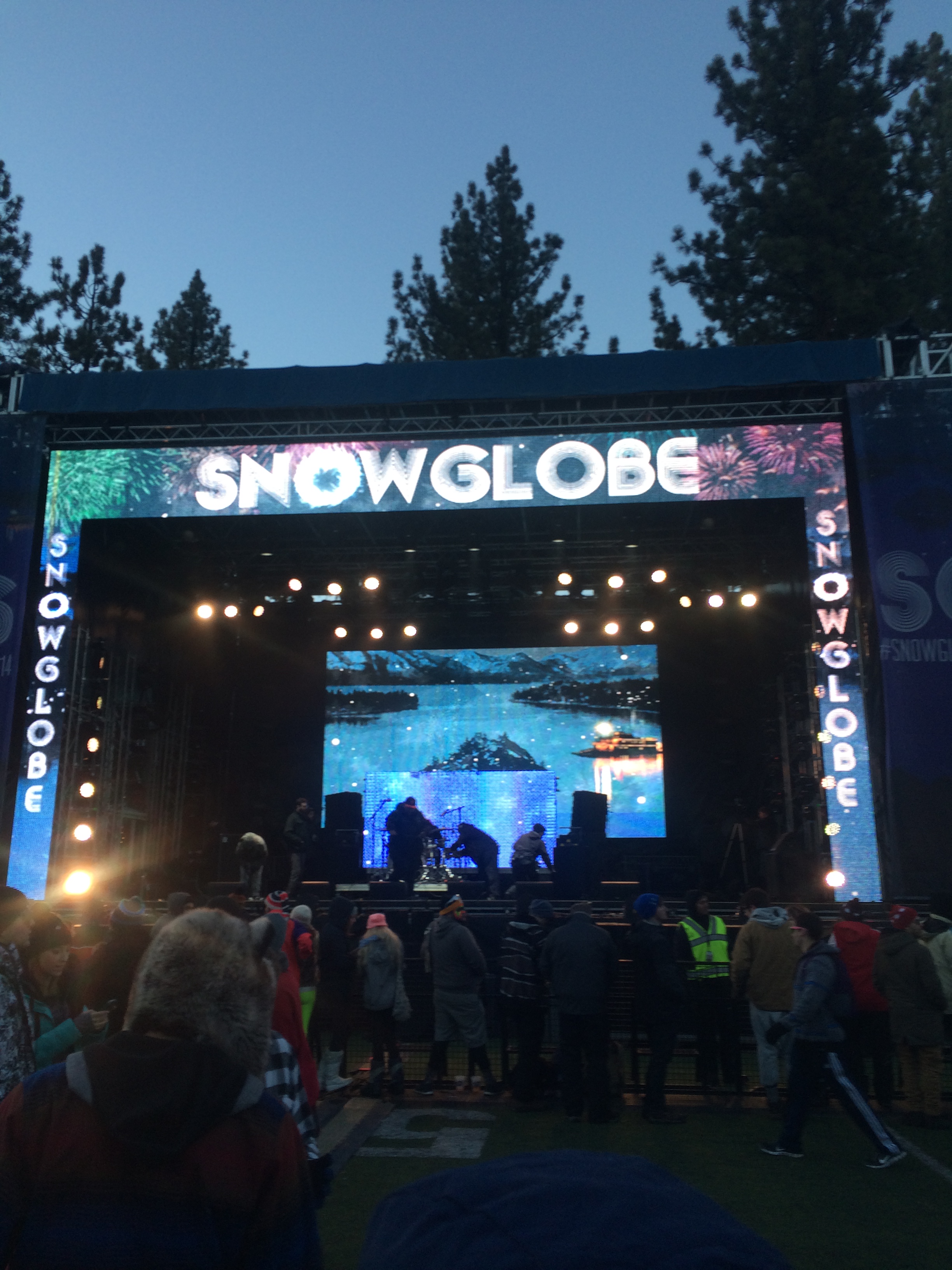 There is no New Year experience like a Snowglobe New Year. Since 2011 South Lake Tahoe has been home to the coolest festival and has ensured thousands of people the most unique and special New Year’s ever. Snowglobe 2014 was my first year attending the event and it was also my first time traveling to Tahoe. I was committed to making this New Year unforgettable and I was lucky enough to have my brother with me to experience it all. My trip began in San Diego, from which I flew to San Jose to meet up with my brother, then we began the drive to South Lake Tahoe. The entire drive took about 3 hours, but it was scenic and beautiful. The landscapes were covered in snow frosted trees and the fresh air was crisp and revitalizing. The closer we got to Tahoe the more I knew this was going to be one of the most epic New Year’s I have ever had.

When we arrived in South Lake Tahoe we familiarized ourselves with the community, stores, and attractions before checking into the hotel. There were many options as far as places to stay, but we needed something reasonably priced and close to both the venue and shuttle station. We ended up booking our room at the Roadway Inn which is about 3 miles from the venue and 10 minutes walking distance to the shuttle station. From the moment we checked in you could feel the good vibes and, coincidentally, we found a prime parking spot right outside of our hotel room. As my brother and I were settling into the room we noticed a friendly group of people hanging out on the second floor balcony. We asked if they were attending the festival and, unknowingly, this “group of people” would become our “Snerglerb” family. After getting all our belongings into our room we went upstairs to visit our new friends and played Cheers to the Governor and got to know each other. Thursdays are always the craziest day of a festival weekend because you want to start on a high note, and we definitely accomplished that. After an eventful Thursday I could not wait for the first day of the festival. On Friday morning we ate a hearty breakfast, hydrated, and gathered our things so we could head to the shuttle. The shuttle station was at the Montbleu Casino and Resort and was very easy to get to from our hotel. The walk was always entertaining because you could see how excited everyone was for the event. Groups of people were laughing and dancing through the snow filled streets and everyone was making sure each person had a positive experience. The shuttle ride was no longer than twenty minutes and it dropped us off right by the entrance. By the time we got there I was ecstatic to get into the festival to check out the layout and dance to the artists that brought me to Snowglobe.

The lineup was one of the main reasons I bought my ticket for Snowglobe 2014. Each day was stacked with great artists and there were not many conflicts because there were only, on average, 5 sets per stage. The main artists I wanted to see over the weekend were Flume, the Disclosure (DJ set), Skrillex, Cherub, and Zedd. There were only 2 real conflicts the whole weekend, but when it came down to making the decision of who to see it was easy for me. The first conflict was on Saturday and it was Odesza and Porter Robinson (LIVE). We started at Odesza, but once we could hear and see Porter was starting we bolted over to the main stage. I have no regrets in doing so either because Porter’s Worlds set is a masterpiece. The second conflict was on Sunday and it was What So Not and Atmosphere. This was an easy decision to make and we went with Atmosphere. We figured it would be easier to see What So Not at a future festival than Atmosphere. Plus, I needed my dose of hip hop for the weekend and Slug and Ant killed it.

Another aspect that made Snowglobe 2014 awesome was that it is a small event. Taking place on the Lake Tahoe Community College campus the whole festival was packed into a small amount of space. There were only 3 stages (Main Stage, Sierra Tent, and the Igloo) and you could get from one side of the venue to the other in less than 10 minutes. In fact, the main stage was on the junior college’s artificial turf field and the other 2 stages were right next to each other. Although the Sierra Tent and the Igloo were right next to each other there was no sound overlap because the Igloo was indoor and the Sierra Tent kept most of the sound inside. Also, during the day performances on Main Stage you could watch snowboarders and skiers do aerial tricks off the ramp to the right of the stage.

There are only a few suggestions I have that could have made Snowglobe 2014 better. The first thing was the execution of the special guests on New Year’s Eve. The set times listed 2 special guests for separate time slots, 2:30 p.m. – 3:30 p.m. and 8:20 p.m. – 9:10 p.m. Eager to see who the first special guest would be my group got to the festival early to find out that Lex’s set was extended into first special guest slot. A little disappointed, we did not let it put a damper on our day because we knew that Cherub would be performing next. Unfortunately, Cherub did not come on until the 8:20 p.m. special guest slot and no one replaced their set time earlier in the day. Turns out there were no special guests. I am not sure what happened, but nothing was communicated to the festival attendees and most waited around for a Cherub set that did not happen until later in the evening.

Another suggestion I have that could have made the event better was the shuttle system. At the conclusion of each day there were mobs of people trying to rush the bus doors. There was little to no organization of lines for effective loading of the busses. Also, on Saturday my group and about 50 other people got kicked off the shuttle we were on about a mile from the Montbleu shuttle station. The bus driver straight up just pulled over on the side of the road and kicked everyone off the bus for no reason. This forced a large group of attendees to walk a far distance back to the safety of their hotel rooms in less than ideal weather. The last suggestion I have would be to make the countdown more prominent. Flume played a killer set, but there was no actual countdown. I had to check my phone to make sure I did not miss the clock strike midnight, and I know for sure some people had no idea it was midnight until the fireworks were shot into the sky (which was really epic with the forest-y landscape).

Honestly, none of the suggestions listed above took away from the fun I had at Snowglobe. They are just observances from an attendee hoping that things will be even better for 2015! I already have my ticket for this year and I cannot wait to reunite with my Snerglerb family and ring in the New Year all bundled up, listening to my favorite artists, and dancing in the forest. I cannot think of a better way to celebrate!